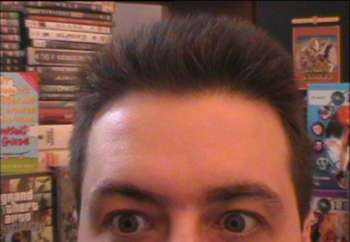 Welcome to the new look DVDfever.co.uk!

Well, the first basic thing about me is that my name is Dom Robinson, I was born in the early ’70s, I hail from the city of Manchester, that’s me on the right from some time ago and no I don’t associate with the “Mad Fer It” Gallagher brothers, even though I once worked not far from their home town of Burnage.

I first started using the Internet in October 1990 while studying for a degree in Computer Science and Management Science at Keele University. While there I regularly visited Cheeseplants, Foothills and then The Talker.

I came out with a 2(ii) and some would wonder why I ended up in a top-secret job in government (ok, so it’s not top secret at all :), but it still wasn’t exactly what I’d dreamed about).

After leaving in June 1993, it wasn’t until nearly a year later when I started my online music chart analysis, after having to take four months off work due to my Aortic Valve Replacement operation.

I had sweet F.A. to do while sitting twiddling my thumbs and in addition, compiled a complete list of all available widescreen videos, which was later published in What Video from January 1995 for three months in separate parts. A reprint was due in Home Cinema Choice in November 1996, also featuring a list of all available PAL widescreen Laserdiscs and an article, “The Whys of Widescreen”, describing why those black bars on your TV are 100% necessary.

In the same month, I had two brief reviews of two widescreen videos, Nikita and Platoon stating why they’re best seen in widescreen, and detailing a couple of “killer scenes”, twenty snippets of trivia and supplied all the aspect ratios in Home Entertainment‘s The Wide Ones supplement.

In October 1998, I wrote an article for Home Cinema Choice, comparing three home-cinema “surround-sound solution” speaker packages from Boston Acoustics, Philips and Yamaha. Then an article in the October 1999 issue of Home Entertainment all about the pleasures and pitfalls of buying DVDs on the internet.

In April 2001 I appeared in an episode of Right to Reply reporting on ONdigital and the piracy of their smartcards, a review of my experience of which can be found HERE. I thoroughly enjoyed the experienced and worked with some fantastic people on the day (recorded Wed April 4th and broadcast Fri April 6th), but sadly Channel 4’s deputy commissioning editor, Francesca O’Brien, made a grave error by cancelling the show after 18 long years, with no chance of a substitute, claiming that there was no need for such a programme because there’s so many channels about, but if you ask me there IS a need for such a show because of the same reason!

After appearing under the London Calling and SonicState banners, I then launched my very own site in DVDfever.co.uk. The music chart analysis continues apace, and I still have a passion for reviewing movies and videogames after around 20 years of doing so.

As of May 2011, there are also reviews of Xbox 360, PC and those of older consoles including Xbox, PS2, the Dreamcast and the original Playstation.

P.S. If you want to contact me, email me on dom @ dvdfever.co.uk

One thing you’ll notice is that there’s a fair number of pre-2011 reviews not on this site that should be. That’s because I used a format for the previous, and original, incarnation of the website that’s incompatible with the new format. As such, I’m going to have to manually convert every single page to this new format. And there’s a lot of them, especially since the website was founded on February 25th, 2000, as well as all the reviews I have written prior to that, going back to the mid-1990s.

DVDfever.co.uk is hosted by Creative Spectrum