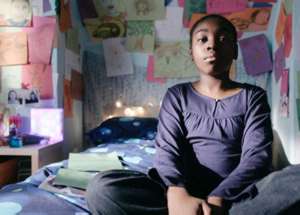 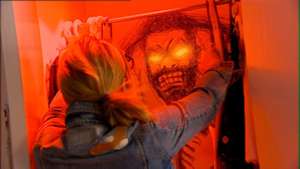 Synopsis: When the TARDIS lands in 2012, The Doctor plans to show Rose the LondonOlympics… but they discover that children on a housing estate arevanishing into thin air…

In preparation for the budget-busting finale, Doctor Who provides theobligatory “filler” episode; a simple story with minimal locations andspecial-effects. Fear Her is written by new Who writer Matthew Graham,co-creator of the BBC’s recent time-travel hit drama Life On Mars.

Unfortunately, this pedigree doesn’t translate into a quality episode, withGraham struggling to pull the plot together into a coherent and plausiblewhole.

The premise is very reminiscent of various Twilight Zone episodes, whereby aseemingly innocent child hides a supernatural power that affects the worldaround them. Here, lonely Chloe Webber (Abisola Agbaje) is able make thingsdisappear by drawing them, only to see them magically appear as “livingpictures” on her paper. It’s a decent enough basis for a mystery episode,and Fear Her has its moments, but it’s ultimately a little bland anduninvolving.

The 2012 London Olympics are omnipresent throughout the show — the OlympicTorch itself due to pass by the housing estate (Dame Kelly Holmes Close,tee-hee) — but the manner in which the Olympic angle is belated used tosolve the dilemma is quite irksome. At its heart, this is a simple story andshould have been content to focus on its main theme (of a girl possessed byan alien child with good intentions, but unreasonable actions). Instead,Fear Her shoehorns in a resolution that provokes one of the unintentionallyridiculous moments on Doctor Who this year, and almost destroys the wholeshow. 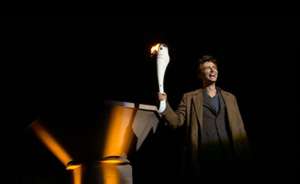 David Tennant (right) is nearing the end of his first year as The Doctor, and isstill playing a one-note character full of enthusiasm and misplaced envy ofthe human race. It’s about time The Doctor’s hard edge and cynical side,semi-present last year with Christopher Eccleston, was returned. As itstands, Tennant is struggling to make the persistently chipper attitudeanything more than mildly watchable. The Doctor should be a mix ofconflicting styles and emotions, always keeping the audience on their toes,but we’ve had none of that this year.

Billie Piper quickly becomes tiresome and predictable as Rose. Hercharacter and relationship with The Doctor is really stagnating now, andit’s coming as something of a relief that Piper is set to be replaced forthe third series. The show really does need an injection of new companionblood – worryingly, this is coming after just 25 episodes. The writersshould take heed and ensure the next companion has more shades to theircharacter than just naive do-gooder.

The supporting cast for Fear Her are fine, but nobody really stands out.Abisola Agbaje is fairly good as Chloe, particularly in a spookyExorcist-lite scene between her and The Doctor. Nina Sosanya is criminallywasted as mother Trish Webber, while other actors play neighbours pushedinto the background for expositional purposes.

Visual effects are minimal, beyond a few animated sequences of “livingdrawings” and a quite unlikely “scribble creature”. The production design isquite limp, just a standard red-brick street of houses and quite weakattempts to replicate the excitement and fervor of a capital city awaitingan Olympic Opening Ceremony.

Overall, Fear Her is a bit of a mess. The general idea is sound, and thealien explanation interesting (yet convoluted), but the final resolution isjust completely mishandled and unintentionally hilarious. The plot lashesabout, content to downplay any threat with some weak “comedy dup” interludeswith The Doctor and Rose (“keep ’em peeled”). There are a few moments thatwork – the possession scene, the “monster in the cupboard”, and theoccasionally on-target gag (“fingers on lips!”), but not enough to rescue ameandering and tonally awkward story.

NEXT WEEK: The end is near. The Doctor and Rose discover Torchwood…