The Bureau: And Another Thing
Distributed by
The Bureau Productions 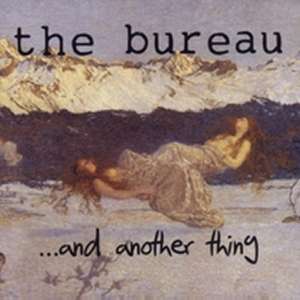 Yet another band on the comeback trail is The Bureau.

First time around, they were purveyors of British funk/Northern Soul, apparently.As a big fan and collector, I know my onions when it comes to the aforementionedstyle, so Im well placed to be critical.

The reunification of ex-Style Council keyboardist Mick Talbot with ex-Dexys ArchieBrown, Geoff Blythe, Crispin Taylor, Paul Taylor and Pete Williams is a mouthwatering thought. Between them, theyve created, or been involved, in some trulymemorable songs: no need to mention.

Back in the early 80s they were rattling the rafters, though from then on,things got, well, complicated, between one thing and another. They didnt last very long.

Nostalgia being nostalgia, Archie Brown was seen gigging with his then band TheYoung Bucks in 2002. One thing lead to another (networking nowadays) resultedin the members, who were geographically challenged to pick up the pieces one again.This time the genre isnt exactly being represented, as theyve leaned moretowards their Dexys roots  heavy brass tendencies etc.

You cant dispute their collective credentials as musicians, but their songwritingskills leave much to be desired.

Overall, this is a pleasant outcome, but ultimately a drab affair.

Whats missing is the dazzling writing of Kevin Rowland and Modfather Paul Weller.

It starts well enough with a flourish of brass swings on Run Rabbit Run,though Archie Browns singing is more like a poor-man’s Ian Dury.

They then go into a funky groove for Save Me, though by even this stage, theyseem like, old men, trying to recreate their youth. Chance In A Million, FreedomMarch and Falling are laboured in the extreme, saved by some interesting instrumentalbreaks by the brass boys.

Just A Word and Flying Lessons have more music hall flavours than Soul, andMad is more Latino fused with hoedown tendencies, which are quite good actually.

At the worst end of things, Nothings Going To Stand, Divided In Two andKeatons Walk are pretty sad efforts at filling the gaps. The weird singing on thelatter, only serves to make matters even worse than the song itself.