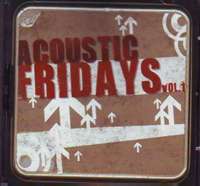 Acoustic Fridays have been held once a month at Farnham Maltings in Surrey since 2004.

Growing in popularity due to a strict agenda of eclecticacoustic, solo or otherwise, theyve garnered a massive and respectfulaudience. Avoiding the open mic scenario, and catering for a listeningweekend crowd, bands are now clambering to get into the venue. Artists areexpected not to overload the decibels, going for a more sophisticatedambiance in the MTV mould  and its all caught here on High Desert Musicsfirst setlist of signed and unsigned artists.

This sumptuous compilation has a plethora of talent committed to disc, withseven tracks recorded especially for the album. When the venue has areputation to be envied, they can afford to be selective, and they are. Thisis some of the crème de la crème whove appeared there.

Rob Reynolds, Sequoia, Big Wednesday, Anna Neale, Rachel Mari Kimber havesecured deals, and its easy to hear why, whilst others are supposed to beon the rise with considerable followings.

Big Wednesdays Easier To Cry has that undeniable Damien Rice feel, full ofachingly beautiful melody like something straight out of O seriouscontenders to be massive. Rob Reynolds is arguably the 21 century RalphMcTell, complete with husky vocals on a gorgeous tune.

Jenny-Lynn Smith proves to be an equally strong songsmith with herbeautifully lilting voice ripping through the soaring piano whicheffectively drives this strong ballad. Matching her is angel-voiced LauraColegate with the self-penned Give Up Giving Up, which with some beefing upwith strings, would make a cracking single. She Turns The Key  Sequoia,goes for more of an Americana angle, featuring deft blues-harp (harmonica)as it rambles in the Dan Fogelberg vein. Fragile Firelight by AlastairBrown floats on the verge of cracking at any time  sublime. Chugging alongis the Stateside feel once more on Mike Hensons Alcatraz, as the detaineestruggles with incarceration.

Laments dont come more heartfelt than on Kimbers melancholic desperatepleas for saviour, as she opens up her heart to bleeding point.Anna Neale shows great promise too, with her Radio 2 friendly All ForNothing whos on the heels of Claire Sproule in the excellent songwritingstakes, as is Rachel Deadmans stunning solo effort Gravity.Case Hardin is as close as you get to a David Gray sound with his liltinggem Tilt-A-Whirl, again with all the potential of a solid single.Rounding off an excellent album, Wire Jesus Close To Tears, with somegorgeous female backups, meanders from its gentle beginnings to a thrustingfinale: a fitting conclusion.

Only disappointments on an otherwise meritorious debut are Heart Attack(Without Grace), Operator (Logo) and Lectures and Lies (Subdelta) where thevocals are less cultured.Anyone of this line-up is capable of making it big-time: that will depend onlucky breaks and good pluggers.

It’s available from the first of these two sites: