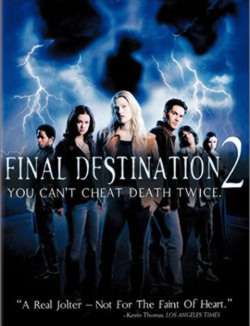 Just like the first film, once again a terrible accident takes place – this time, on the first anniversary of the events of that movie, there’s a motorway crash to end all crashes envisioned by Kimberly (A.J. Cook), so she decides she’s going to take another route with her friends as they head off for a weekend break. However, a policeman stops her, the drivers of the other cars who were meant to die, now get out to complain that they’re being held up, then Kimberly points out the truck that’s about to cause big trub… and she’s right. Of course, all these people should be thankful that they’re still alive… for now.

You know what’s going to happen for the next near-90 minutes, once the group have collated their thoughts in the local cop shop about how deaths “stalks” people, such as one dead-head (pun not intended) explaining “Yeah, like, what if we’re all getting that ‘Diff’rent Strokes’ curse or something?”, but the good thing with a film like this is that you never know who will die next and when. Only two characters from the original movie return – the school recluse Clear Rivers (Ali Larter), who’s now spending time in a padded cell, and the creepy mortician, Bludworth (Candyman Tony Todd). We also learn how the other then-survivor, Alex Browning, who envisioned the plane crash, passed over into the next life.

Again, like my review of the first film, to go into detail any further would spoil the fun that’s to be had within, but it’s safe to say that it contains plenty of shocks and surprises and director David R. Harris, taking over from James Wong, does an expert job in providing the suspense and necessary strange camera angles and slo-mo to provide a worthy sequel. Just look out for things like the fridge magnets that remain, as well as the spaghetti thrown from a window, in the first post-motorway death scene.

What I will mention is that, unlike before, there’s not just one premonition to be had by the lead character, but several. It’s also a lot more bloody and gory than the first. I just hope we don’t have to wait three years again for the next in the series. 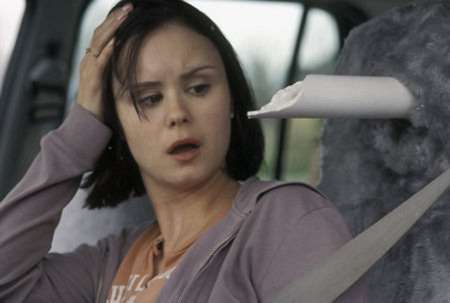 Presented in the original cinema ratio of 1.85:1 and being anamorphic, there’s no imperfections on the image. The sound comes in flavours of Dolby Digital EX 5.1 and DTS ES 6.1, the latter of which I listened to and when push comes to shove, it absolutely rocks. No doubt, like me, once a death scene occurs you’ll be rewinding it back a bit to check them out in more detail, but your neighbours will be less than impressed.

On the extras front, there’s a fair bit here, but all stuff you’ll watch once only. The following is listed under “All Access Pass”:

Then, under a separate menu comes “Beyond The Movie”:

There are subtitles in English only, just a mere 15 chapters even though it’s a relatively short film (about 80 minutes before the end credits kick in), while it also has a great main menu in true keeping with the film.