The Fifth Element
Distributed by

The Fifth Element is what Bruce Willis is searching for after his whole existence is changed while out on a normal day’s work.

Starting in Egypt, 1914, life as the locals know it is about to change when some rather bizarre travellers turn up to collect the four ancient stones that symbolise fire, earth, air and water. When put together with “the fifth element”, they are an effective barrier against the forces of evil, a force that won’t be seen for another 300 years.

It’s now 2257 and a planet-sized sphere of supreme evil is heading towards the Earth at a frightening speed. In an over-complex plot which brings together cabbie Korben Dallas (Bruce Willis), bad guy Zorg (Gary Oldman) and a mysterious young girl named Leeloo (Milla Jovovich), can evil be stopped for good?

Whatever the outcome, with Luc Besson at the helm making fantastic visuals – something on which he certainly does not disappoint – and Eric Serra creating the score, you know you’re in for an audio-visual feast, even if the film itself doesn’t make a great deal of sense.

There are also cameos from Luke Perry, Lee Evans and Julie T. Wallace 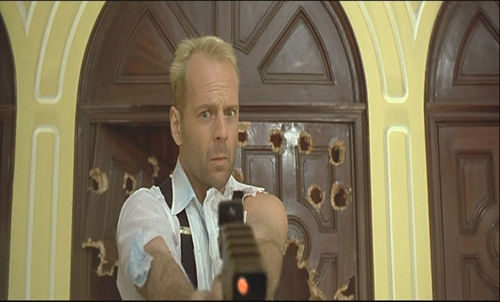 As with Austin Powers and James and the Giant Peach, Fox have corrected the mistake that blighted their first DVD release, Titanic. We are given an anamorphic picture which benefits from 33% extra resolution and the original theatrical ratio of 2.35:1.

I couldn’t find any motion artefacts and the picture looks superb. It’s another film that makes great use of colour, not least in the costumes all of which were designed by Eurotrash nut Jean-Paul Gaultier. The Region 1 DVD was referred to as “reference quality” given the quality and I’d say the same applies here. The average average bitrate is a very good 6.59Mb/s, regularly peaking over 9Mb/s and it’s all on a dual-layer disc.

The sound quality is first rate. Mastered in Dolby Digital 5.1 surround sound, the numerous action scenes shout out at you, the opening sound effects during the titles are enough to crack the windows, while Eric Serra‘s score never fails to impress. 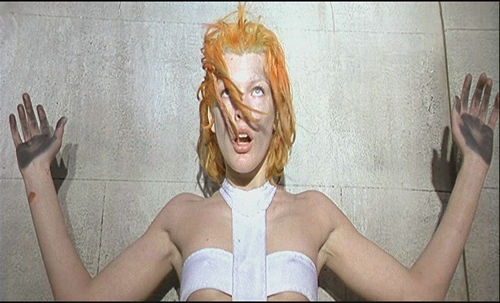 Chapters and Trailer : There are 22 chapters spread over 121 minutes. It covers most major scenes but a few more wouldn’t have gone amiss. The theatrical trailer is also included, as is one other which I couldn’t access from the main menu but could access via my DVD-ROM.

Languages and Subtitles : There’s just one language on this disc – English, but it is available in Dolby Digital 5.1. There are also English subtitles for the hard of hearing.

Featurette: “Searching for the Fifth Element” : A 22-minute feature with comments and chat from Bruce Willis, Gary Oldman, Milla Jovovich, Luc Besson and Eric Serra. Very entertaining too, but once you’ve seen it you probably won’t go back to it.

Menu : The main menu is excellent with animation and sound, here of the opera singer. Other menus appear in similar fashion, but with different film clips, all presented in anamorphic format.

There’s a problem with the chapter selection menu, though. Similar to VCI’s The Land Girls‘ deleted scenes menu and Queer As Folk‘s photo library menus, I can bring up the first page but selecting “MORE”, doesn’t give me that but just reverts me to the previous menu, on my Dxr2 DVD-ROM player. 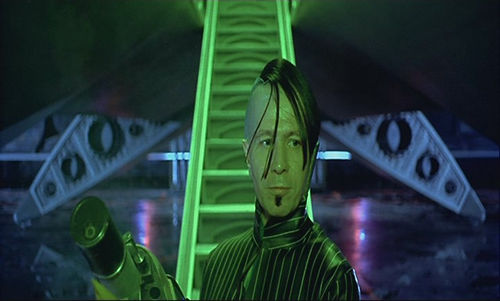 Time to fight back…

For me, The Fifth Element didn’t quite gel together as a film. It’s a triumph of style over substance, but in anyone else’s hands it wouldn’t have even had the style. While it’s not a patch on The Big Blue, Leon or Nikita, it’s certainly worth a watch.

As for the price, that’s still a thorny issue since Fox still insist on charging over twenty quid. However, it seems the December titles, all of which are also back-catalogue titles, will be now reduced to a penny under that amount. You won’t go back to the extras too many times, so if you can get this title for around this price and aren’t fussed about the extras, it’s worth considering.

Thanks to Stuart Jones from Pathe for the replacement copy of this disc that I have now received. The first one had a serious problem: Some pressings of The Fifth Element, including the copy I first reviewed, have a fault causing the disc to stutter, slow down and stop at around 49:00. It comes during chapter 9 so it can’t be a dual-layer problem when it changes from one to the other – something I’ve never experienced anyway on my Creative Dxr2 DVD-ROM player – and I checked to make sure the disc wasn’t scratched either. I understood initially that later pressings were to have overcome this problem, but Stuart assures me that there have been no other pressings other than the initial batch. However, the replacement disc I received looks and sounds just as good as it should with none of the same problems.