Gattaca There is no gene for the human spirit
Distributed by 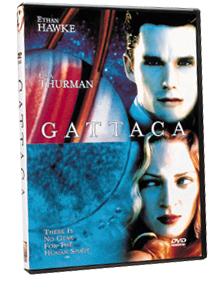 G attaca is the name of the company for which genetic science has become an artform. In the future, as soon as you are born, your genetic ‘footprint’ will tell the exact time and cause of your death. Beyond that, your parents will be able to specify your sex and enable you to avoid catching any diseases or developing genetic defects which would otherwise hinder your health. This may sound a bit bizarre when presented with the concept, but for the characters in this film, it is the present and it’s for real. Vincent (Ethan Hawke) knows that he will die not longer after reaching 30, having been born naturally – making him a genetic “in-valid” – and he’s envious of his “valid” brother Anton.

Vincent dreams of becoming an astronaut, but only “valid”‘s may apply and he is introduced to Jerome (Jude Law), a “valid” – now incapacitated and in a wheelchair – who is willing to sell his prime genetic material for cash. Using Jerome’s blood, urine, skin and hair samples, Vincent is able to forge a new identity and pursue his goal of a mission to space with the Gattaca Aerospace Corporation, while romancing Irene (Uma Thurman), another “valid”.

Problems arise a week before his flight when a Gattaca mission director is murdered and a relentless investigator (Alan Arkin) puts Vincent in the frame, threatening to expose Vincent’s double life and ruins his hopes and dreams forever.

Other additions to the cast of note are Elias Koteas – the sickest man on the planet – if you’ve seen “Crash” – and Jayne Brook, from TV’s Chicago Hope, as Vincent’s parents, not to mention Xander Berkeley, the kind of actor whose face is always recognisable but you can’t always remember his name, as the Gattaca scientist who may or may not be onto Vincent.

Like Vincent before he is set to take flight, the quality of the picture on display is almost perfect. Any artifacts are only visible if you’re really looking for them. They won’t be seen easily from the normal viewing distance and don’t detract from your enjoyment. On one side, the film is presented in its original widescreen ratio of 2.35:1, is enhanced for 16:9 widescreen televisions – thus allowing for higher resolution – and the average bitrate is a so-so 4.25 Mb/s. On the flip-side comes the pan-and-scan version which loses a lot of picture information, most notably the gorgeous set designs, so you’re best off with the widescreen one.

The sound comes in Dolby Digital 5.1 – which will benefit all of those with the suitable hardware – and Dolby Surround for everyone else. The sound doesn’t get much of a workout, mainly being used for dialogue and ambience, but the musical score from Michael Nyman can send a shiver down the spine in the same way that Eric Serra’s did for The Big Blue.