SunshineIf it dies, so do we.
Distributed by 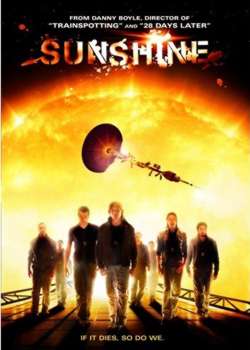 For me, the movies of Danny Boyle are hit and miss.

Of his films which I’ve seen,Trainspottingis easily the best with its clever dialogue, great acting from all concerned and brilliant soundtrack.Shallow Grave was also a good piece of entertainment, but at the other end of the spectrum there’sthe dreadfulA Life Less Ordinarywhich just became ‘life less’ as a good start fell apart before too long, while28 Days Latersuffered the same problem. The opening was spectacular, but as soon as Christopher Eccleston and the madarmy men turned up, it really went south.

Sunshine falls somewhere inbetween all of these. 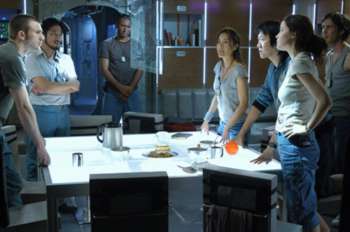 As the film begins, there’s a clever segue from the Fox Searchlight Pictures logo into the start of the filmand we meet the crew of the Icarus II settling down to dinner. They’re 16 months into their voyage towards thesun which, we learn, is dying. In 50 years time it will be no more, so the answer is to drop a bomb the sizeof Manhattan island into it as that will ‘kick start’ the star that gives us life and get it up and runningagain, theoretically at least.

However, you’ll notice from the name of the ship that this isn’t the first time anyone’s tried to resolvethe problem. 7 years ago, the Icarus I, led by Captain Pinbacker (Mark Strong), stopped returning signalshome and given that there’s only 3 years’ worth of food on board, it’s unlikely anyone will still be alive afterthis point so off going the second mission and this is the Earth’s last chance… so there you have it: evenif the sun doesn’t get to the point where it’s expanding to such a size that it envelops the Earth and the restof the universe some time in the future, we’re still buggered by external forces so the politicians can stufftheir ‘green taxes’ where they hide their manifestos as Mother Nature’s got us beat.

No-one knows what happened to Icarus I, but shortly after the crew lose the ability to transmit messageshome and are about to slingshot around Mercury, they pick up the ship’s distress beacon, but with it being10-15,000 miles from them, can they make a stop-off on the way? 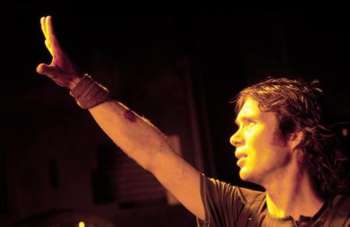 Sunshine has an intriguing prospect from the start, and there’s always a suspicion that something willgo wrong otherwise there’d be no point making a film about it, but while it’s great for the first two-thirds,it really falls apart for reasons I don’t want to go into as that would spoil it, but I can confirm that itall starts to go wrong once they’ve discovered the truth about the failure of the first Icarus mission and itseems that Danny Boyle was just trying to be weird for the sake of it. What a great shame. It’s likehe got bored and took it down the Event Horizonroute, but not in any way as inventive.

The cast of dysfunctional crew members works together well but none of them really stand out, apart from thefact that28 Weeks Later‘s Rose Byrne is still cute,and I remember Cillian Murphy from28 Days Laterand I remember Michelle Yeoh from the dreadfulCrouching Tiger Hidden Dragon, but no-one feelslike they’re really putting themselves out here.

The Voice of the Icarus II comes from actress Chipo Chung, who sci-fi TV viewers would know as appearingalongside Derek Jacobi in the Doctor Who episode from the 2007 series, Utopia, as his servantChantho, who kept adding ‘tho’ before everything she said. 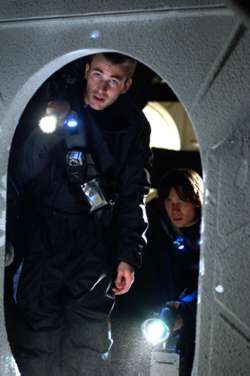 The film is presented in the original 2.35:1 theatrical ratio and is anamorphic with no problems whatsoever,the spaceship looking nicely desolate as does the sun look bright and golden, with great firey SFX asappropriate.

The Dolby Digital 5.1 output is great as well, with wonderful sound effects as the angle of the shield ischanged in a ‘pivotal’ moment (pun not intended) and the metal contracts and expands, not to mention for anumber of scenes that I can’t detail here for fear of spoiling it. There are a fair few overly quiet scenesin the film, but the soundtrack packs a punch when required.

The DVD menus are static and mostly silent, but the main one has an annoying piece of music from the film thatonly runs for a few seconds and then just repeats itself ad infinitum. Subtitles come in English and there areonly 20 chapters for the 103- minute running time, so a few extra would’ve been nice.

Stupidly, however, this disc starts with a trailer for 24 Season 5… which came out last year, and it’salso stupid because the Special Features section is for trailers, not the start of a disc that makes it looklike a low-rent video rental title. Trailers also follow for Prison Break Season 2, Pathfinder and…a Maltesers ad! Oh, then another trailer, for 28 WeeksLater which also stars this film’s Rose Byrne. Oh, and then one more trailer – Day Watch, whichdoes look superb, though.