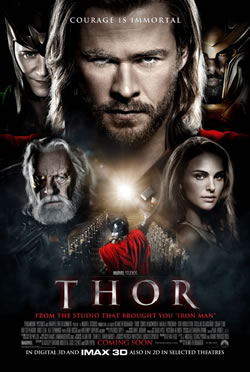 Thor 3D: The third visit to Cineworld in a day and the huge screen 10 was deserted for this film. Does that mean people haven’t bought the hype?

Whatever, we were quite delighted to have missed any potential crowds as we took up the geeks’ seats four rows from the front. I was really looking forward to this having heard so much about Kenneth Branagh’s great direction. Sadly, both Mrs W and I were disappointed.

Sure, the special effects are mind-boggling. I would love to have seen how the film-makers brought Asgard and Jotunheim to life because it was amazing. But the problem was that the story was so tepid and obvious. It was a classic case of making sure a movie hung on to its 12A certificate – so that younger boys can bathe in the battle scenes. I guess they don’t care about character exploration…

Also, I found the 3D very disappointing. This was a film where I expected to be ducking and diving to avoid fire from a huge robot-like creature or icicle bullets from the Frost Giants. Oops, I’ve jumped into the plot without adding a bit of background.

Essentially, Anthony Hopkins is Odin, the King of Asgard, and is about to announce his son Thor as his successor. Simultaneously, their old enemy, the Frost Giants, stage an attack on Asgard and Thor offers to lead a revenge mission. When Odin forbids this, he goes against him and stirs up a hornet’s nest. For this, he is banished to earth where he pals up with scientists Natalie Portman, Stellan Starsgard and Kat Dennings.

His romance with Portman is terribly clunky, not least because he seems to be speaking in 18th century English. Oh, and there’s something of a clash with his brother, the duplicitous Loki (Tom Hiddleston). There is nothing much wrong with the performances, although many of those on view have done much better in other movies (Portman and Hopkins clearly tick that box). Meanwhile, Chris Hemsworth is perfectly fine as Thor but is certainly not exceptional.

Let’s get this in perspective, Thor was not bad, in fact it is a feast for the eyes and uses humour well. I just wondered whether I might have expected more from a $150m movie than 6/10.
Nevertheless, that is how I have rated it.