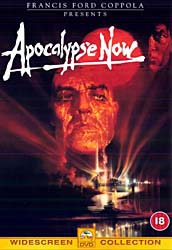 Bizarre and captivating are two words Ican use to describe Apocalypse Now, Francis Ford Coppola‘scontribution to the Vietnam war films which has neither opening, norofficial closing credits.

Captain Benjamin L. Willard (Martin Sheen) is back in the jungle foranother tour of duty. He learns that the demented Colonel Walter E. Kurtz(Marlon Brando) is about to be arrested after he ordered the executionof some Vietnamese intelligence agents who he believed were double agents.Willard’s mission, should he choose to accept it, is to kill Kurtz but theguy is a law unto himself and it’s not going to be a walk in the park.

There’s many a poigniant scene here such as when hard-nosed Sgt. Kilgore(Robert Duvall) takes to bombing the Vietnamese by organising thegunships to charge to the strains of Wagner‘s Ride of the Valkyriesto a scene a little later where he utters the memorable phrase of “I lovethe smell of napalm in the morning”.

Martin Sheen had a heart-attack while filming, Dennis Hopper takes therole of a photojournalist on the side of Kurtz and there are appearances fora much-younger Harrison Ford and Larry Fishburne.

Songs of the era are included as is the controversial sacrificing of a cow asKurtz is murdered. This scene was left in because it’s part of a real-liferitual, despite the BBFC’s tendancy not to portray cruelty to animals.

I have a beef with the picture, but the principal problem is not Paramount’sfault. Originally shown in cinemas at 2.35:1, any print intended for viewingat home has been cropped to 2.00:1 at the insistance of cinematographerVittorio Storaro. Most scenes are still fine, but nothing can beat theoriginal ratio and to this day I’ve never understood his decision.I have seen a portion of this in the full widescreen ratio of 2.35:1 onZDF TV. “Ich liebe die smell der naplam im morgen”, anyone?

At times there are some scratches on the print and it looks a little grainyat times, but the anamorphic presentation helps.The average bitrate is 5.91b/s, occasionally peaking over 9Mb/s.

The sound has been remastered in Dolby Digital 5.1 for English only. A verygood job has been made of it with explosions and gunfire making the best useof your speakers and when Wagner gets going, there’s some great rear-soundaction as the choppers approach.

There’s only a handful of extras, but what’s here is definitely welcome,starting with a near-four-minute Theatrical trailer in anamorphic16:9 widescreen.

The end credits are counted as an extra – and appear in two forms – because,believe it or not, for those who saw the original 70mm cinematic presentationthe film ended with Willard sailing off into the distance and a 1979 copyrightnotice appearing onscreen. As the customers left the cinema they were handeda brochure with printed credits.

The Excerpts from the original theatrical programme comprise of a briefintro by Coppola followed by selected highlights from the shooting logover the 238 days of filming.

When I saw the film at the Keele Film Society in the early 1990s, the printwe saw had the “apocalyptic end sequence”, with the closing credits playedover the top. This version was later released on video. It’s this scene thatfeatures as the extra, Destruction of the Kurtz Compound with director’scommentary, without the credits on top though. You only see those overCoppola’s alternate ending that he doesn’t like to call an alternate ending.It’s just a plain black screen.

For such a long film, the chaptering is woefully inadequate with a mere 19to the film. The main menu is animated with a copy of the film’s openingand the helicopter crossing the scene before the jungle is bombed.

For the English dialogue we have a remastered Dolby Digital 5.1 soundtrack,the Italians get Dolby Digital 4.0 – so no centre channel nor subwoofer forthem – and the Germans get plain surround. Subtitles are available in English(and hard of hearing), Danish,Dutch, German, Italian, Norwegian and Swedish.

Francis Ford Coppola is certainly a thorough and unconventional directorand the film is a must-see, if only the once, for many of its key scenes,but the whole is definitely less than the sum of its parts.

It’s one to double-bill with Tartan Video’s Hearts of Darkness: A Film-Maker’sApocalypse, a 92-minute ‘making of’ which is available on video but hasyet to make it onto DVD.