Austin Powers: International Man of Mysteryplaces Wayne’s World‘s Mike Myers in the title role of a James Bondspoof. The world is being held to ransom for a considerable sum by Dr. Evil (againplayed by Myers). If they don’t pay up $100 billion, the madman will tunnel intothe earth’s core and set off a nuclear warhead, resulting in every volcano eruptingsimultaneously and signalling the end of the world.

Before this happens though, the action begins in 1967 and Dr. Evil is overplaying hishand once again. To escape our intrepid hero, he climbs into a cryogenic rocket whichtakes him into space for the next thirty years. However, he didn’t reckon on Powers’pursuit, freezing himself in time as well until Dr. Evil returned to Earth.

Now it’s 1997, Evil returns and Powers is defrosted. What follows is a series of veryfunny sketches as Evil takes on the world and Powers tries to put it back to rights.Most of the comedy is derived from Powers trying to apply 60’s logic to a 90’s worldand his unquestionable sexual powers amongst the female members of Earth, with plentyof double-entrendre thrown in for good measure.

In the old days, Powers’ girlfriend was Mrs Kensington (played by MimiRogers), but in the 90’s it’s her daughter Vanessa (Elizabeth Hurley).She vows never to end up in bed with Austin, but you know how the story endsin the regular Bond films… Also, whereas Bond films have bad girls as wellas good girls, the bad alternative here is portrayed by Fabiana Udenioas Alotta Fagina (!)

Add to this cameos from several people including Carrie Fisher, Burt Bacharach,Rob Lowe, Susannah Hoffs, Christian Slater and Roseanne’s ex, Tom Arnold and you have acomedy which I thought would be way too over-the-top to be funny before I saw it,particularly since both Wayne’s World 2 and ..Axe Murderer neededmuch improvements making to them, but one that I found myself laughing out loud towhen I did watch it.

Finally, I understood a joke about Prince Charles was meant to be edited outof this film, but I definitely heard one so I presume it’s been reinstated.The reason was that the UK cinema release happened to come on the Friday followingthe death of Princess Diana. It’s a good job that the John Goodmancomedy King Ralph wasn’t released at the same time otherwise we couldbe living as a republic now :) 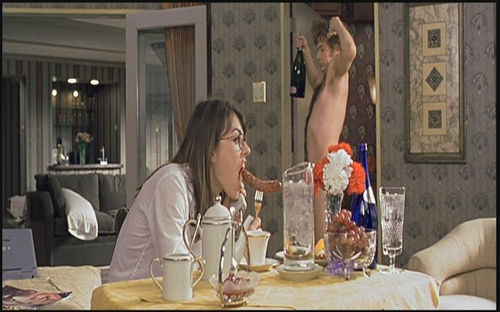 Vanessa always had a taste
for the nice things in life…

First off, Fox have corrected the mistake that blighted their first DVD release,Titanic.This time we are treated to an anamorphic picture which benefits from 33%extra resolution. Also, we get the film presented in its correct theatricalratio of 2.35:1, whereas Americans had a version with the matte opened up to1.93:1. It didn’t suffer because of it in terms of the framing, but the 2.35:1ratio does look better.

There are no artefacts to be found in the picture and overall, the word”stunning” could easily be applied. Due to its comic nature, most of the filmis dressed in shades of different stark, bright colours. A low bitrate may haveresulted in such a film being made to look like a ZX Spectrum crashing, butthankfully the average bitrate is an excellent 8.33Mb/s, regularly peaking over9Mb/s and it’s all on a dual-layer disc.

There has been talk of sound dropouts which forced Fox to reprint the title.However, since I didn’t spot any of these, perhaps the disc I saw came from thesecond batch? 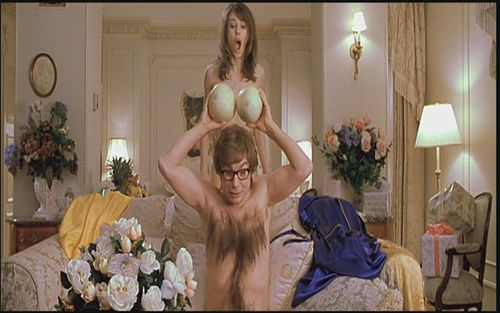 A couple of juicy ones
gave Vanessa a squeal of delight… Extras : Chapters and Trailer :There are 24 chapters covering 91 minutes which covers all the major scenes.The theatrical trailer is also included. Languages and Subtitles :There’s just one language on this disc – English, but it is available in DolbyDigital 5.1. There are also English subtitles for the hard of hearing. I spottedone slight error. When Austin says hello to his Italian boots in the samelanguage, it looks like it was meant to be in italics, but someone’s only putin the flag to close italics, so it reads, “Buon giorno,[/I] boys.”, so similarto HTML code. Deleted scenes :There’s five deleted scenes which include two alternative endings. Owners ofthe Region 1 DVD will think we’re missing out because they had seven scenesin total. However, the extra two, both featuring what happened as a result ofDr. Evil’s henchmen being offed, have been put back into the film itself. Cameo Menu :Instead of flicking through the chapter selection, you can find your favouritecameo piece featuring one of Carrie Fisher, Burt Bacharach, Rob Lowe,Christian Slater and Tom Arnold instantly with this menu. It’snot an essential addition, but it’s a nice option to have. Audio commentary :A full-length commentary track from director Jay Roach and the film’sstar, Mike Myers. Cast biographies and filmographies :And you get exactly that for Mike Myers, Elizabeth Hurley, Michael York,Mimi Rogers and Robert Wagner. Menu :The main menu looks very good with a shot of Liz and Mike in front of aswirling green and purple background, mirroring that seen on the cover.There’s also a small piece of backing spy-theme music which is recycled overand over again. The chapter selection menus are excellent being both animatedand scored. 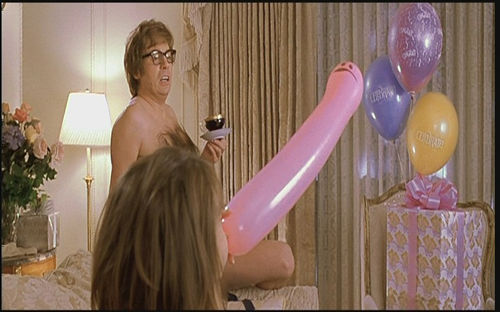 This wasn’t in her “job” description…

Content-wise, this DVD has everything that its Region 1 counterpart has,bar a few trailers for other films featuring some of the film’s stars anda fullscreen option (so no loss there). Don’t forget though that we actuallyget the film in its correct ratio. It’s also pleasing to see so many extrasand the amount of effort that’s gone into a DVD that’s essentially aback-catalogue title, when they are usually given the short shrift.

As for the price, that’s still a thorny issue since Fox still insist oncharging over twenty quid. However, it seems the December titles, all of whichare also back-catalogue titles, will be now reduced to a penny under thatamount. If you can get this title for around this price, it’s definitely wortha purchase.