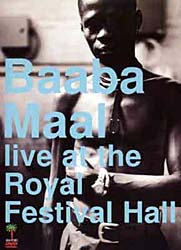 Baaba Maal: Live at the Royal Festival Hallis one of the first five concerts filmed, recorded and mixed specifically forDVD, featuring Baaba Maal and his backing band Daande Lenol – which translatesas “Voice of the People” – and comes in both DTS 5.1 and Dolby Digital 5.1sound formats, as well as a traditional stereo version.

The concert was filmed on six digital cameras and the sound was recorded byusing 48-track digital equipment. If that’s not enough for you, the concertalso features special guests Ernest Ranglin, Ira Coleman, The ScreamingOrphans and Choir Connexion.

The film is presented in an anamorphic 16:9 ratio – unlike the Region 1’s4:3-cropped ratio – and looks very good indeed with plenty of colour and nonoticeable artifacts. The average bitrate is a good 7.50Mb/s.

The sound fares even better with two major sound formats – Dolby Digital 5.1and DTS 5.1 – and one with which to blast your neighbours. A plain stereooption is also available.

Extras : Chapters & Trailers :There are only 8 chapters on the disc, but it still works out at one per trackand many of them are fairly long. The complete listing is as follows : 1. Gorel
2. Ca et La
3. Koni
4. Cherie
5. African Woman
6. Douwayra
7. Souka Nayo
8. Hamady Boiro (Yele)The trailers included are a theatrical trailer, plus three trailers for otherPalm Pictures DVDs – Dancehall Queen, Talking Headsand Ghost in the Shell. There’s also an “Anti-Drugs Trailer” if you’re worriedabout your kids taking drugs in an American school… Languages & Subtitles :Songs in their original Senegalese language, but no lyrics unfortunately. And there’s more… :A 7-minute Interview is included featuring chat from Baaba Maal mixedin with music clips, while the Picture gallery is a montage of musicmixed with various pictures of Senegal, for a 4-minute duration.

Menu :Most of the menus are static but the main menu has a small amount of animationand sound. Nothing to get too worked up about but nice to see the effort madeall the same.

I didn’t think a concert of African music would grab me that much and I wasright, but if it’s your bag then this is definitely worth a look and alsonote that we get the 16:9 widescreen version, unlike the Americans who have itcropped to 4:3.