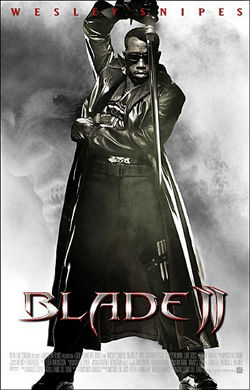 When Blade IIbegan I was a fair bit disappointed because it dragged as it explained thebackstory to Wesley Snipes‘ character and I thought that if they hadn’tspent four years getting this sequel to the big screen then it wouldn’t havebeen necessary to show clips because the audience wouldn’t have forgottenwhat it was about.

As luck would have it, after 40 minutes the action started to kick in, I gotmore into the film and from there it just got better and better. Knowing whatI know now, perhaps when I next see it again, the first third of the filmwill pass more quickly.

For those of you who thought that the first film saw Abraham Whistler (KrisKristofferson) killed off, then think again. He wasn’t dead, just resting,in some kind of liquid-filled stasis tank and Blade’s first port of call isto rescue him once he gets wind that his friend’s still alive, even if he islooking rather the worse for wear. Once the duo are back together, there’s atypical bit of testosterone-fuelled rivalry as Whistler whinges with Blade’snew in-house recruit Scud (Norman Reedus). 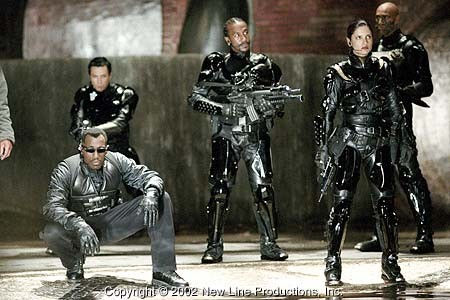 Blade, Asad, Nyssa and the Bloodpack

So, what’s the sequel about? Blade’s been given the unenviable task of havingto side with the team that he did battle against last time. The vampires areasking for his help because an even more deadly force is around: the Reapersled by Jared Nomak (Luke Goss, yes, him from Bros) are creatures thatnot only kill humans, but go after the vampires too. They’llkill everything in their path… and everyone wants them stopped.

Those who enjoyedAliens will bein familiar sequel territory here as the hero(ine) of the piece is joined bya rabble of gruff yokels who’ve been through plenty of physical trainingto get them into their current vocation and now they’re ready to kick buttagainst the unknown.

Blade must lead the Bloodpack against the evil enemy, but he hardly gets, norexpects, a willing welcome from someone who puts away their kind for a living.The main grump of the group is Reinhardt (Ron Perlman, usually one forarthouse movies, but drops in for blockbuster on occasion), Asad (DannyJohn-Jules, aka Cat from Red Dwarf), Priest (Tony Curran)and Verlaine (Marit Velle Kile, the cute redhead, if I remember correctly).There’s a few others too, but these serve merely to fill out the numbers andget offed along the way like you’d expect.

To supplement the threadbare plot, not that that’s much of a problem with thiskind of film, there’s sibling rivalry thrown in for awkward measure as theOverlord Eli Damaskinos (Thomas Kretschmann) wants to ensure that allplans to kill off the bad baddies run smoothly, even if that means the deathof his daughter Nyssa (Leonor Varela) who joins the Bloodpack. Thatdoesn’t necessarily mean that she does die, but just that the Overlord wouldconsider it an occupational hazard and little else.

Finally, the role of the Blood Bank Doctor is played by a bit-part actor,Pete Lee-Wilson, who has appeared in The Bill, Casualty andin this film has been given the Sven Goran Erikkson make-over treatment.Well, he certainly didn’t look like anyone else. 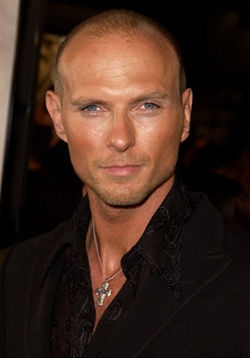 As the film progresses, there’s a comfortable blend of action scenes asBlade grins and high-kicks the baddies to pieces, plus some clever inventionscourtesy of the aforementioned Scud, such as ultraviolet bombs which explodelight all over the shop and are the quickest way to kill off the Reapers… aslong as the Bloodpack don’t get caught in the brightness. There’s also secretsto be revealed in the usual plot devices of good guys who turn out to beworking for the other side and characters who are revealed late on to berelated to other people.

Of course, what you also want to know is… is Luke Goss any good… ordoes he sing in the film? Well, yes and no. He’s been taking acting lessonsin the US and I don’t know how he’d get on in a period drama, but he certainlydoesn’t seem out of place here and it shows good foresight on behalf of thedirector to have given him the lead baddie role. (And the “no” was to thesinging)

In fact, he must have liked Goss’ performance so much that when directorGuillermo del Toro was casting his next film, Hellboy, due forrelease next year, he will be bringing both Goss and Snipes back together again. 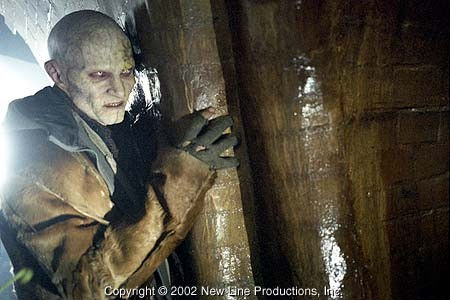 …and Luke Goss after.

When this film reaches DVD later in the year, I shall be looking forward to itfor a number of reasons. Firstly, it’s a damn good action film and secondly, Ihope that when I watch it again, the first 40 minutes won’t seem to slow nowI know that there is light at the end of the tunnel. I’ll also look forward tothe extras to discover the way in which the Reapers’ “mouth movement” wasdone, which you’ll see for yourself when you watch the film – something thetrailers do not give away.

Fans of computer games such as Virtua Fighter and Soul Caliburwill find something to enjoy too, since many of the battle scenes within thefilm look like moves taken from these games, particularly in the final fightbetween Goss and Snipes as the former leaps around the room with such heightand comes down with such force that you wonder if the latter will ever win.

I have to admit thinking something was up with the cinema screen when the1.85:1 screen didn’t open up to 2.35:1 as the BBFC logo appeared and the openingcredits rolled because that was the ratio of thefirst film,but apart from a handful of oddly-composed shots, the film mostly settled downinto the narrower ratio. I still think 2.35:1 would’ve been better for thisone though.