A Civil Action Justice has its price
Distributed by 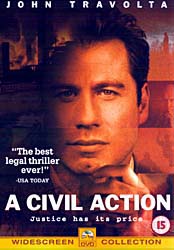 Steven Zaillian (based on the novel by Jonathan Harr)

A Civil Action is a compelling courtroom dramabased on a true story starring John Travolta as lawyer Jan Schlichtmann,one of three members of a small Boston practice who work on a no-win no-feebasis where every penny counts. Self-made businesses haven’t got time for the”little guy” so it comes as no surprise when Jan is surprised by a phone callfrom Anne Anderson (Kathleen Quinlan) during a radio phone-in, referringto a case which passed through their hands but was turned down because the moneyit would generate will not pay the rent, not that they made their intentions soexplicit at the time.

Eight children died from leukemia, one of them belonging to Anne Anderson,when, it is alleged, the water supply was polluted by two industrial companiesworking on a section of land nearby whose waste products were pumped outdirectly into the lake. She doesn’t want their money, just an apology from theperson or persons responsible, but since it cannot be proved from the offsetthat either Grace or Beatrice Foods are liable, the case would be lengthy,expensive and certainly not the case for a small-time firm such as Jan’s; andhe explains this in its clearest terms when he gives in to pressure and agreesto meet the parents of the deceased children.

Things take a turn when, on the way back from their meeting, he gets chance tolook at what the industrial companies are up to, chats to Pinder (StephenFry), the leader of a environmental organisation who look into pollutionincidents such as these and, in time, sets the wheels in motion to take on thecase with the drive and determination to win. However, as time presses on andfinances are tight, his colleagues begin to despise the position he’s put themin as he goes over their heads on occasion with important decisions and therisks increase. If they can hold on long enough, Jan is confident of a sure-firevictory in the form of an apology from those responsible and adequatecompensation for the families who have suffered a tragic loss.

John Travolta has easily proved himself the ‘comeback kid’ of the decadesince his return to form in Pulp Fiction following the career that wasalmost dead with the Look Who’s Talking trilogy. The words “cool, calmand confident” are the best descriptions of the performances he has given sincehis return to the big screen in 1994 in films such as Broken Arrow, Face/Off,Get Shorty, Phenomenon and Primary Colors.

In my opinion, he turns in an Oscar-worthy performance of a man so set againsttaking on a case that could turn his practice upside-down, only to change inan instant to a man who gives his all to it with equal gusto, to the pointwhere he convinces his business partners to do the same – not an easy taskwhen he’s already persuaded them to take one course of action.

Seasoned actor Robert Duvall does an equally impressive turn as rivallawyer Jerome Facher while making the acting process seem effortless. Facherhas been in the business for a long time and is the perfect example of a manwho is always ahead of the game and knows how to play it. At times his characteris as serious as a heart attack, while at others he can be as fallable as therest of us, but as he explains in a clever scene which mixes real life withhis part-time college lecturing position, the trick is not to let anyone knowwhen you’re not on the ball.

One surprise in store for me was the welcome presence of comedian/authorStephen Fry as Pinder, the foreman of the team brought in to study theenvironmental effects of the pollution. He’s certainly not the sort of personyou expect to find in a big-budget Hollywood drama, but his part works verywell and you wish he had more scenes.

Of Jan’s colleagues, the best performance comes from William H. Macy ashis account James Gordon. Always at his best when given the correct part,Macy’s character starts off as cock-sure as Travolta’s, but as the money runsout, desperation sets in as the bank refuse to lend any more money and his hopeslie in schemes as elaborate as… lottery tickets and selling off the deeds totheir houses. Needless to say, Gordon is on the verge of a nervous breakdownand this is brilliantly portrayed by Macy.

The rest of the cast is a cornucopia of talent. James Gandolfini is oneof many industrial workers interviewed by Schlichtmann and co. but will hespill the beans where others have declined? He certainly has good reason to;Dan Hedaya is the enemy of the peace as the foreman responsible for theproblem; John Lithgow plays the no-nonsense Judge Walter J. Skinner;the aforementioned Kathleen Quinlan, plus brief cameos from directorSydney Pollack as the head of Grace who has a frank discussion with Jan;and an uncredited appearance from Travolta’s Primary Colorsco-star Kathy Bates who won an Best Supporting Actress Oscar for her partin that film.

For the picture, there’s a constant level of grain which is mostly noticeablein the dark scenes, but not so bad during the bright ones. The film ispresented in the original 1.85:1 widescreen ratio and is anamorphic, unlikethe Region 1 DVD. The average bitrate is a very good 6.81Mb/s, oftenpeaking over 9Mb/s.

It’s not an action blockbuster, so there’s not a massive use of loud SFX,but dialogue is clear, there’s some nice use of surround sound in placesand the end result is pleasing. It doesn’t push the boat out because itdoesn’t need to, although there was a LOUD bolt of lightning 85 minutes inwhich gave me a shock when I wasn’t expecting it.

We’re in scant territory here with just a two-and-a-half-minuteTheatrical Trailer and a four-minute Featurette, the lattercontaining brief soundbites from some cast and crew members and both ofwhich you’ll watch once and forget about.

The chaptering is good though with 25 spread throughout the film.English and German dialogue are in Dolby Digital 5.1, with the other languagesgetting surround only. Subtitles are available in English (and hard of hearing),Arabic, Bulgarian, Danish, Dutch, Finnish, German, Norwegian, Polish,Swedish and Turkish.

The menus are all silent and static.

Overall, it’ll be hard to find another recent drama which mixes an engagingplot with excellent characterisation and the amount of talent that’s on displayhere. That said, it loses a point for having the occasional slow moment, butmakes up for this with an ending that is not afraid to go against the typicalway that is Hollywood. I’m not saying that things go completely awry forSchlichtmann and associates – that you will have to find out for yourself -but the path getting there is well worth travelling. It’s not all as harsh asit sounds, given the subject matter, as there are plenty of subtle comic touchesspread throughout the film, mostly delivered by Messrs. Travolta and Duvall.

When it comes to this DVD presentation though, the extras are severely lackingand once you know the outcome of the case, will you ever watch it again?

You must at least rent it, but buy it?