Crazy Taxi.is an arcade racer that began life in that very dwelling.The premise is simple: drive around town, pick up fares, drop them off,then move onto the next unsuspecting punter. Each time they have a timelimit. The sooner you arrive, the more cash you’ll score. Some people willalso pay more than others.

When you stop, your fare will tell you where to go and a picture of theirdestination is shown. A green arrow will appear atop the screen and if youfollow it you’ll get closer, although note that it doesn’t always point outa direct route. When you’re nearly there, the arrow turns yellow and eventuallychanged to red before zooming off and pointing out the place the stop. Ifyou can’t see it after that, then you are the proud owner of a white stick.

If you have to get to where you’re going by not quite sticking to the roads,then so be it. You can drive into the parking lot and jump off the firstfloor, cruise down the railway line or underwater and I even managed toreplicate John McClane in Die Hard with a Vengeance when he drovealong the interstate, saw what he wanted was on the road below and just tookoff from the side of the road to land down below with a thump.

At the start of game, choose from the original or Arcade tracks, then oneof four drivers each with their own attributes – I tend to stick with Gusas he seems to get about the fastest – and then choose whether to play for3, 5 or 10 minutes or as long as you can manage before running out of time,the latter not being particularly easy as you get extra time for pickingpeople up and doing the right thing, but I never managed to get beyond fouror five punters this way. 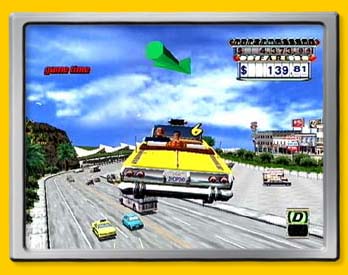 I haven’t played the arcade machine but it’s a safe bet that it only containedthe main game and not the nine sub-games that are also included in thePS2 version in which speed is of the essence and they either basethemselves around trying to get from A to B in a set time with only onepassenger, or doing something similar with several customer drop-offs andpick-ups, plus a game where you have to perform a jump off a long slope thattakes you over 150 metres in length. It took me a few times before I managedit, but I’m reliably informed that Crazy Dashes and Limit Cuts are the wayto go here.

You almost get the feeling that real taxi drivers don’t have to take aproper test – they just have a go on this for the afternoon before being letloose on the roads.

The graphics are fast, furious, colourful, fun and absolutely gorgeous. That’s the bestway I can describe the graphics in Crazy Taxi.As you drive about the speed of the game ismind-blowing and it runs like lightning. There’s some very slight pop-upas you drive along and something rather odd happening when you see futurecustomers walking through cars or other solid objects to get you, but there’snothing to compare, when you drive down very steep streets (say that quicklyafter a few pints) while playing on a 32″ widescreen TV, to give that perfectstomach-churning effect of feeling in danger.

The sound is the only let-down in this game, although sonic effects werenever a driving game’s strongest point. The rock music from the Offspring is loud and energetic,but repetitive – despite All I Want (the one that begins “Ya! Ya! Ya! Ya! Ya!”) being a favourite of mine – there’s the usual rev of the engine – albeit useful whendetermining if a “Crazy Dash” has worked, while the dialogue is basic withcustomers shouting at you when you get it wrong and miss their time limit,or complimenting you when you do your job properly and one of the malepassengers sounds like Beavis and Butthead‘s elderly next-door neighbour.

The handling of the car takes a little while to get used to and I find it’seasier to perform tight turns by using the D-pad and not the analogue joystick,so tend to use that throughout most of the game. There’s also special movesto consider such as the aforementioned Crazy Dash and Limit Cut which willtake some time to perfect. At times, if you get involved in a crash it’snot always easy to tear your way out of it if there are several cars involvedand the time continues to tick down… 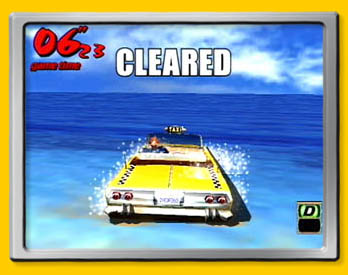 A personal tip I have: when you drop someone off, as the camera spins around,try to spot another fare waiting to be picked up.

Thanks to The Great Cthulhu from uk.games.video.dreamcast forhis advice on Crazy Dashes and Limit Cuts :

When you start before you accelerate,put the car into R then straight into Dand accelerate if you get a fast start (no wheelspin) that’s a Crazy Dash (CD)(the engine pitch goes up real high). Use the same principle when you aremoving, it works easier when you are moving at speed.

Let go of Accelerate, shift into R, straight back into D then floor theaccelerator. Make sure your finger is completely off the accelerator when youshift from D to R and back to D, it’s really all in the timing.

Practice doing them from a dead stop then you’ll know if it’s working or notand you’ll get used to the engine noise that you should be hearing.

A Limit Cut is a CD straight after a CD, you need to do the second (orthird, fourth etc) CD just before the previous CD winds down, once again youneed to learn what noise the engine makes.

If you have the Dreamcast version, clickHERE for thereview of that version which includes a load of cheats for that console. 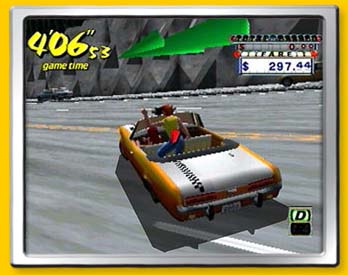 Overall, what the game needs is improved physics around the town. I lovedMicrosoft’s Midtown Madness (that’s the last time you’ll hear me praiseanything from the Gatester) and the cars should have actual damage inflictedupon them when hitting something and the ability to cause a pile up on theinterstate whenever you feel like it.

I’ve give anything to be able to drive round the centre of Manchester likea madman too if they could arrange it for future sequels.

The important question is: how does this compare to the Dreamcast original?As far as I can see it’s identical. It plays just as fast an frenetic and isas much fun with no slow-down at all. Of course, if you already own a DC andthis game then there’s no need to buy it, but if not then I’d plump for thePS2 version because, at least in my house, it’s the one of the two consolesthat’s plugged into the mains a lot more often.

Review copyright © Dominic Robinson, 2001.Visit theAcclaimwebsite.
[Up to the top of this page]