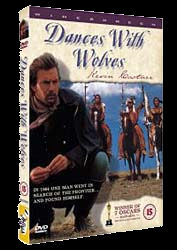 Kevin Costner’s directorial debut, Dances With Wolveswas a film that some thought would never work, given that it was a Hollywoodfilm from a first-time director, it was a western and it was three hours long.Well I loved it.

Costner cast himself as Lt. John Dunbar, a soldier fighting in the civil warwho’d done his time and wanted his own personal mission – to see the frontierbefore it’s gone, only to be told by his superior, the mad Major Fambrough: (MauryChaykin) that there’s nothing out there and it’s a waste of time. However,once he gets out there he forms an alliance of sorts with a wolf he nicknames”Two Socks” because of the white patches on its front paws.

And so he becomes nicknamed himself, to that used as the title, by a SiouxIndian tribe who he comes across and doesn’t get along with at first, to saythe least. Little by little, though, he comes to prove that the white man andthe red indians can come together, especially when he falls for Stands With aFist (Mary McDonnell).

It was in this three hour version that we first saw Dances With Wolvesand it was bettered some time after when a widescreen video boxset was releasedcontaining the four-hour extended version and the soundtrack CD. The charactersand the storyline were fleshed out just that little bit more that made it worththe extra time invested. Alas, that’s not what we have here, but surely itcould have been possible courtesy of seamless branching that would haveextracted the three-hour theatrical version from the extended.

I understand that Costner prefers the shorter to the longer and that only aDTS 5.1 soundmix was created for the shorter one. I’d heard similar abouta Dolby Digital 5.1 release too, but theInternet Movie Databaselists a German DVD running for four hours with both English and GermanDolby Digital 5.1 soundmixes, released under the “Kinowelt” label, a lot ofwhose product has surfaced here recently under the Momentum Pictureslabel. So, perhaps… one day.

Shot in 2.35:1 Panavision, Costner made perfect work of filling the framewith the grand splendour of the hillsides and landscapes that surround hispost and that of the Indian tribe.

Sadly, not the same nice things can be said of the transfer, which hasartifacts on view from time to time, over-saturated reds at times, getsrather blurry when there’s motion which is easily spotted in close-ups onfaces and although the print is anamorphic, what started off as a 2.35:1 widescreenratio looks a little squashed and everyone’s faces a little fatter than theyshould be. This was slightly eased by using the ‘Just’ function on myPanasonic widescreen TV (Philips sets have a similar one with ‘Super Zoom’),but of course we shouldn’t really have to do that.

What’s very odd is that the theatrical version and, hence, the NTSC Region 1DVD, run for 181 minutes, which leads to a PAL running time of 173 minutes,as per the video. When I played this DVD though it gave a running time of181 minutes, so have we just been given an iffy NTSC-to-PAL conversion then?The average bitrate is 5.5Mb/s, occasionally peaking over 8Mb/s towards thelast hour of the film.

When it comes to the sound, though, there is no question. It’s spot-on andin both Dolby Digital 5.1 and DTS 5.1 in English dialogue. The effects ofoccasional gunfire and whooping Indians don’t stretch your system, but thereal joy comes in the score from John Barry and when I bought theaforementioned video boxset, I really savoured the soundtrack CD.

There’s not a massive amount happening in the extras department: a2½-minute Trailer, a 7½-minute Featurette which is astandard made-for-TV affair featuring 4:3 clips of the film interspered withinterview soundbites shot at the time on location, a 3-minute Kevin CostnerProfile which is really more of the same and finally a Director’sCommentary which goes one better by not only containing Costner but hisco-producer Jim Wilson.

There are 25 chapters through the film which isn’t quite enough, Englishsubtitles for the hard of hearing and menus which contain subtle animationand a looped part of the film score.