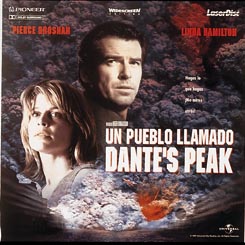 Plot (such as it is) concerns eponymous small Pacific NorthWestern townwhich, despite being built on the slopes of a volcano not unlike Pompeii hasjust been named the second nicest place to live in the United States by Moneymagazine. (And the first? “Some place in the MidWest,” says a cheerfulhotelier, “but who cares?”).

Its mayor is single mother of two Linda Hamilton. Enter volcanologistPierce Brosnan (potential girlfriend wiped out by falling chunk ofmolten rock to the head fleeing an erupting volcano in the prologue) todiscover various local danger signs, followed by his superior CharlesHallaran to pronounce the town safe, followed by further more pressingdanger signs (like brown tap water towards the end of disc side one just asBrosnan and Hamilton look finally set for a bit of nookie), a perfectly chosenside break and the eruption proper starting less than a minute into the startof side two.

Donaldson may not be a master director – imagine this in the hands ofHitchcock (The Birds), Spielberg (Jaws) or even (if youwant the weirdo version) Lynch (Eruption at Twin Peaks) – but the wholething makes sense in a pedestrian sort of way and as a visual spectacular,it’s peerless (which is not something that could be said for the movie’s maincompetitor, the dismally repetitive Volcano).

Anyway, having rather enjoyed this in the cinema and trudged through theabysmally cropped and near unwatchable PAL VHS rental version,this disc is a joy. Widescreening is essential to viewing pleasure here,whether we’re talking about cars driving around, the beautiful static lakesidevista that opens chapter 7, the camera move over the crater ridge in chapter12 (complete with superb Dolby Surround chopper sound effects that vary fromdifferent points of view within the scene), the pyroclastic cloud with skyeither side in chapter 33 before it subsequently covers the skyscape, forkedlightning across clouded skies in chapter 25, the collapse of a dam ornumerous other scenes.

One curious observation, though. In the scene where the children in the carcrossing the molten material spot their dog on a distant, solid rock outcrop(chapter 31), the first shot of the dog has the animal so small you can barelysee it in the 2.35:1 version, whereas it’s quite visible on the fullscreen VHS.Not, you understand, that I’m complaining – this film has so many scenes thatare unwatchable fullscreened that the widescreen is the only version that makessense (outside of a print projected in the cinema).

Chapter stops are more than adequate, with several starting at the perfectmoment (usually the opening of a scene where a car drives around the town) -almost as if the screenplay had been written and the film constructed withlaserdisc chapter stops in mind. There are some superb sound effects tocomplement the visuals, notably for falling rock chunks and creaks and cracksinside the finale’s mine shaft where Brosnan is entombed inside a car that isslowly being crushed flatter and flatter.

All in all, then, this is an adequate (rather than great) film that feelsthat its incarnation on laserdisc was properly thought through, although itsvisuals are physically so expansive that there’s really no way for them to bequite as impressive as in the cinema.

One small carp: it would have been nice to have three similar genre trailers,e.g. Daylight (which is here), Jaws and Twister on this disc. Alas, we onlyget one out of three. Otherwise, though, Pioneer’s PAL Dante’s Peak isa terrific little disc.