Dawn of the Dead: Director’s CutWhen there’s no more room in hell
the dead will walk the Earth.Distributed by 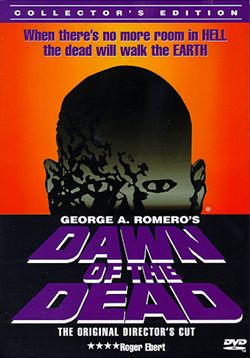 (The Crazies, Creepshow, Day of the Dead, Martin, Night of the Living Dead, Season of the Witch)

Dawn of the Dead: Director’s Cutis the middle section in George A. Romero‘s Dead Trilogy, preceeeded byNight of the Living Dead (1968) and followed by Day of the Dead (1985),the latter of which should also be available on DVD now courtesy of Arrow Films.

This is a battle of good against evil. The evil are the zombies that are walking the Earthand must be stopped, while the good guys are everyone else that haven’t yet been turned.Brains blown out, hickeys that go one step too far and many more nasty surprises – justthe essential elements that make up a gore-fest like this, such as the zombiewho gets inadvertantly “scalped” by helicopter’s blades. After that, get setto kill ’em all down the shopping mall!

For some reason the BBFC have stepped in and decided to make some slight cuts to this film.I don’t know why because they base their decisions on context and it’s clear that anymurders in this film are not ones that can be easily imitated – after all, when did youlast find some zombies in your town (and not just the staff that work at Dixons) ?The cuts, which only last six seconds, are :

The picture quality here is surprisingly good for a film that’s 21 years old. There’s afew flecks on the print, moreso near the start of the film, but a lot of the time theprint is quite clean with no artifacts causing any problems. Although it’s presented in a4:3 fullscreen ratio, it can comfortably be zoomed-in to fill a widescreen TV. Theaverage bitrate is a low 3.93Mb/s, occasionally peaking over 6Mb/s.

The sound is mono and functional in terms of gun-fire and explosions, but also has adodgy synthesised score.

Extras : Chapters :The disc has 25 chapter covering the 139 minutes of film and could use a fewmore, but it’s certainly a lot more than the Americans got with a mere NINEfor the same film.

Alas, no theatrical trailer is included.

Languages & Subtitles :The film is in English only, with no subtitles. This seems to be the case forall BMG releases. Stills Gallery :At the rate of a page each, stills are available for most of the maincharacters in the film, plus many zombies and it makes for a nice addition tothe disc. Audio Commentary :This DVD contains an exclusive commentary by Tom Savini, the manresponsible for all the gory special effects which helped develop such aninternational cult following, plus additional chat from several of hiscolleagues who worked with him on the film. Menu :The main menu is silent, but has some cool animation of bullets being firedacross the screen, with blood gushing out at irregular intervals, in keepingwith the theme of the film.

For some reason, there’s no “Play Movie” option. If you’ve already been viewingpart of the film and have come back to the main menu, “Return To Movie” willtake you back, but to start the film from scratch, you’ll either need toselect the first scene yourself, or reboot the DVD altogether since it willbegin after the copyright info has been displayed.

Overall, my main feeling about this film is that if you’re a fan of the PC and Playstationgame Resident Evil and are fed up waiting for Capcom to turn their creation intoreality, then go and get hold of this film. Watch in a darkened room and it will instill the samesense of fear as the zombies slowly approach their soon-to-be-victims.

More power to BMG too for getting the Director’s Cut here, albeit in aslightly-censored form. This version runs 139 mins 19 secs (6 secs cut), whilethe version previously only available on video, several years back, lasted120 mins 8 secs (with 12 secs cut).

Fans of the film may have a tough choice choosing between this and the USArelease. $24.95 for the latter gets you a widescreen version (1.66:1) with only9 chapter stops, but is totally uncut. However, since it doesn’t contain theaudio commentary, completists may end up getting both.

The director’s cut has been released in one form or another in Finland, whileAustralia have an uncut version, but Germany’s release is heavily cut and inNorway it’s been banned altogether.

PS. And if the manager of my local Dixons branch wants to write to me about the above commentrelating to his staff then feel free. However, he never replied to my letters of complaintabout their shoddy service and given his incompetence I doubt he even knows which way roundto sit on the lavatory.