Dead man Walkingtells a chilling story, based on true events, whichdetails the intense relationship between Sister Helen Prejean and MatthewPoncelet who is sentenced to Death Row after the brutal murder of two younglovers in the forest.

Prejean becomes Poncelet’s spiritual advisor through his countdown to deathand could never have been more unprepared for the events that followed.

At times though, Poncelet claims he is innocent, even to the point where he’sprepared to take a lie-detector test. The question that lingers up until thelast minute is whether he is guilty or not and if he is, will Sister HelenPrejean be able to get through to him before the warden cries “dead manwalking”, the call for a man to be given his punishment by death.

One of the strong points of this film is in its cast. Susan Sarandon,wife of its director Tim Robbins, cuts an effective portrayal as the Nun tryinghard to offer compassion to the convict while trying to understand the manbehind the facade he sometimes puts up, as well as trying to offer condolenceto the victims’ families.

Sean Penn, once attributed to making dire movies with Madonna, made aname for himself in Casualties Of War when people discovered that hecould act. It wasn’t until 1993 when he proved his worth again with Carlito’sWay and then in 1995 with his portrayal of Matthew Poncelet here, a manwho doesn’t know what’s best for him, or whether it’s worth trying to decideanything if others have already decided his fate. More recently he has appearedin Oliver Stone’s U-Turn and opposite Michael Douglas in The Game.

The rest of the cast is fleshed out with Robert Prosky as Poncelet’slawyer, with Raymond J. Barry, R. Lee Ermey and Celia Weston asthe parents of the two murdered teenagers.

Overall, this is a well-made thought-provoking drama with powerful actingfrom all concerned and competent direction from Sarandon’s husband. 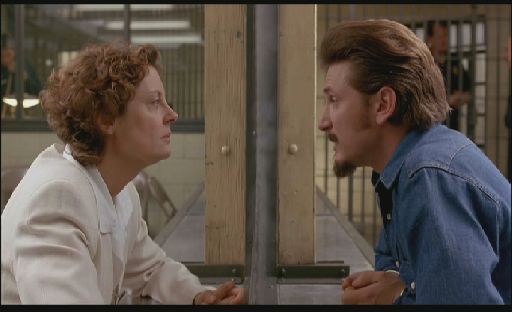 Trying to recreate the Smith and Jones head-to-head
conversations wasn’t wise for a film such as this.

The film is presented in 1.85:1 anamorphic widescreen and looks as good asthe 16:9 print that was issued by Polygram in 1998 with crisp, clear detailthroughout bringing out the stark reality of the content.The average bitrate is a high and steady 7.44Mb/s.

The main difference here, though, is the inclusion of a Dolby Digital 5.1soundtrack. The original cinema release didn’t have one, so it’s nice to seethey’ve gone to the trouble for the DVD. While it doesn’t offer a great dealbeyond ambience of the music from the late Nusrat Fateh Ali Khan, the increasein clarity and channel separation is everything. Note that the French andSpanish soundtracks are Dolby Surround only.

There’s less extras here, but not much less. Just a 30-second TV trailer and a2½-minute theatrical trailer, the latter of which just wouldn’t play forsome reason but can be spotted when checking the disc’s bitrate. I wouldn’tlose much sleep over it.

The Polygram disc also contained brief biographies and filmographies forSean Penn, Susan Sarandon and Tim Robbins, but only went as far as 1995,despite the DVD being released three years later. Neither disc sadly containsthe director’s commentary track which exists on the NTSC Laserdisc.

The film is split into a sparse 16 chapters, there are subtitles in5 languages: English for the hard of hearing options, French, Spanish,Dutch and Hungarian; and the menus are all static and silent.