DogmaIt can be hell getting into heaven.
Distributed by
Film Four 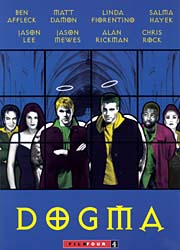 “One of the sacred promises imparted to Peter, the first pope, by the Son ofGod before he left was, ‘Whatever you hold true on Earth, I’ll hold truein heaven’“,so states Bartleby (Ben Affleck) – who is partnered with the formerAngel of Death, Loki (Matt Damon) – and that if theyenter the arch of the church, led by Cardinal Ignatius Glick (George Carlin),that’s transformed its image to include a’Buddy Christ’ figure instead of one of the carpenter’s son on a cross,then they’ll become mortal and once they die, these exiled angels from heavencan return home. However, doing that will cause civilisation as we know it tocollapse, so they intend to take down wrong-doers along the way such asadulterers and a Disney-esque organisation that has their own MickeyMouse-like character, Mooby.

Unbeknownst to her at the start of the film, bored abortion clinic assistantBethany Sloane (Linda Fiorentino) will be whisked away from her colleagueLiz (Janeane Garofalo) and offered a new vocation as the Last Scion,who is given the task of stopping the two leads by Alan Rickman,here, crotchless, playing Metatron, the voice of God. Assisting Bethanyis Rufus, the 13th – and only black – Apostle (Chris Rock), plus thereturn of Kevin Smith regulars, Jay (Jason Mewes) andSilent Bob (Kevin Smith, himself).

Hovering between working for good or evil is the creature from hell,Azrael (Jason Lee) and Salma Hayek has a rather redundant rolein muse Serendipity. When God finally makes an appearance aftermuch discussion as to whether He is a She, or the colour of God’s skin,God is revealed to be singer/songwriter Alanis Morissette.

For all my faults, Dogma is the first Kevin Smith film I’ve actuallygot round to watching – so I’ve still got the Jersey trilogy (Clerks,Mallrats and Chasing Amy) to workthrough – and it’s an entertaining one in part, but at times it does tend tohave the characters ramble on a bit and there must be more words-per-minutespoken in this film than any other.

The picture quality is very good, the only downside being a slight tinge offuzzy artifacts that are only spotted when viewing up close. The film ispresented in its original anamorphic widescreen ratio of 2.35:1.The average bitrate is a fairly steady 6.66Mb/s (was this done on purposegiven the aspect of Hell?), often peaking over 8Mb/s.

The sound is in Dolby Digital 5.1 with plenty of multi-channel sound effectsfrom simple scene-change swipes to the buzzing of Azrael’s helpers.

Extras :This release has been rather badly timed. Just as VCI are releasing thesame near-featureless version that Columbia did last May, the Americans willbe striking back before long with a Special Edition containing audiocommentaries, documentaries, deleted scenes, out-takes and something featuringthe “Buddy Christ”.

Playing this disc on a Creative Dxr2 DVD-ROM, I found that all of the extrashave been FUBAR’d by stretching whatever was given to them and squashing itdown vertically to within a 16:9 ratio – sort of the opposite of the benefitsthat an anamorphic presentation begins.

I had the TV set correctly and any 4:3 footage on any other disc doesn’tpresent such a problem with my Dxr2 set the same way (accommodating anamorphicwidescreen pictures where appropriate and without buggering up 4:3 footage),but playing this in aPlaystation 2 posedno such problems.

We could use more than 20 chapters that this disc provides and there areonly subtitles in English for the hard of hearing. The menus are silent witha hint of animation.

Overall, fans of Kevin Smith will no doubt want to rush to get this, buthow can I recommend a DVD which will be far superceded soon? It was due tobe released just eight days after this one, but thanks toSimonfrom the DVD UK mailing list for confirming that it’s been delayed -indefinitely but it isn’t expected to be too long away.

Thanks also to Karl Flaschke from VCI for the info that theytried to obtain the rights for the content that is set to appear on theSpecial Edition but were unable to do so.

Review copyright © Dominic Robinson, 2001Check outThe Official Dogma Website.
[Up to the top of this page]