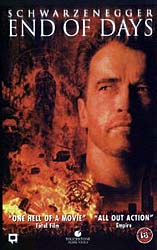 End of Days is the name given to the prediction when Satan will pay a visit at the end of the year 1999 and bring about the end of civilisation as we know it… unless of course he can be stopped.

The film begins in 1979 as Christine York (Robin Tunney) is born. It turns out that she is The Chosen One TM. We also find out that the woman who turns out to be a friend of hers later in life, Mabel (Miriam Margolyes), is anything but as she begins this film as the nurse who takes the newborn child away “to get cleaned up”. I won’t divulge what happens, but it’s a far cry from what’s expected and you’d get fairer treatment from Beverly Allitt.

Just a few days before the end of the supposed millennium (it won’t happen until the end of 2000, so why can’t the Church even get this right?), come on down, the devil’s in town and he infests himself in the body of Gabriel Byrne, hereto only known as “The Man”. He does start off as a normal person, but is soon possessed and, to throw in a pun, Byrne turns in a devilishly-good performance. Ahem…

Arnold Schwarzenegger plays Jericho Cane, a washed-up ex-cop-turned-security-specialist whose family was murdered, leaving him a broken man. Usually partnered by his best friend Chicago (Kevin Pollak, probably best remembered as one of The Usual Suspects), we first see Jericho sat alone in his apartment ready to blow his brains out, but a disturbance puts him off sending his brains west for the day.

What follows doesn’t make the greatest amount of sense, but it’s a great rollercoaster ride that’s definitely deserving of your attention, apart from Rod Steiger‘s brief performance as Father Kovak with an accent from god-knows-where…

The film is presented in the original 2.35:1 cinematic ratio and is anamorphic, with no artifacts and a superb-looking picture. What’s also great is that there’s scores of dark scenes which could sound the death knell for the smooth error-free pictures but the encoding handles them perfectly. The average bitrate is 5.57Mb/s, occasionally peaking over 8Mb/s.

The sound blisters out of the speakers with one explosive scene after another, or some that simply resort to gunfire to get the message across. Occasionally there’s a quiet scene, but it’s not what Arnie’s best known for.

Chapters: 19 chapters to the film and it could use more. Why do Buena Vista DVDs only
get a few chapters while Warner’s get 30 or more usually?

Languages and Subtitles: English and Germany in Dolby Digital 5.1 for dialogue. Subtitles are available in the same languages, the English variant being for the hard of hearing too.

And there’s more…: First off is the American Trailer and then Spotlight on Location, a 25-minute made-for-TV featurette with no surprises. It mixes chat from everyone with many clips from the film. It’s good to watch once, but that’s about it.

The Special Effects concentrates on 9 scenes from the film such as The Train, The Creature, The Shattering Albino and Sex with Satan (oo-er, missus!), each of which last anything between two and nine minutes long. After each, the disc then attempts to show the scene as it looked in the finished version, but this doesn’t always seem to work.

There’s also something called Soundtrack Presentation, but it’s just a trailer for the soundtrack album, although the label makes it sound like they include the full thing on here which would’ve been nice. The soundtrack includes all your granny’s favourites like Eminem, Limp Bizkit, Korn and this is followed by two music videos from Rob Zombie and Everlast.

Menu: Static and silent with a shot of Arnie and Gabriel and the standard options.

Overall, this film deserves a much better hearing than it received from most of the world’s press who must’ve got together on purpose to criticise it. I don’t know of anyone who had a good word to say about it, apart from those with a brain, so put all the magazines aside and think for yourself.

End of Days marks Arnie’s first film in two years since Batman & Robin, the delay partly being caused by his operation to replace his aortic valve in his heart (hey, me too!)

This DVD has also got all the features of the Region 1 version, so you have no excuse but to bow down and appease Satan by shelling out twenty nicker.