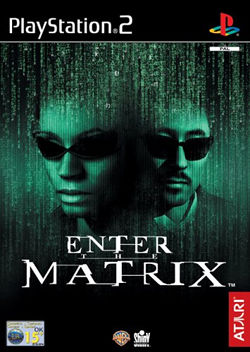 Ok, so I’m not a particular fan of the Matrix films,but I can still review a game objectively… when there’s a decent game toreview.

This is a new game to run alongside the film ofMatrix Reloaded.The first filmwas a bit of fun at times, but once you got past the flashyvisuals, there was little else to hold your attention. Seeing how the secondone has been explained, I shall not be rushing to see it, but there’s always achance a game can be different and set itself as enjoyable entertainment. Yes,there’s always a chance… but it’s a chance not always taken.

I’m sure there’s a plot in here somewhere as you take on the roles of eitherGhost or Niobe from the sequel, but the game pigeonholes itself into fightscenes, car chases, piloting the Logos – the fastest hovercraft in the Zionfleet and encountering the Oracle to ask for help how to save mankind. 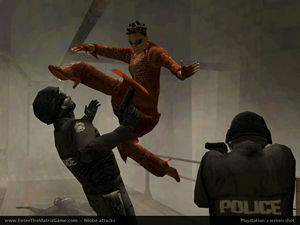 Let’s start with the good things about Enter the Matrix – it’s goingto sell by the shedload whatever anyone says of it, but it doesn’t deserveto. It sold a million copies within the first week but, because of the amountof money ploughed into it, they’ll need to sell four million to break even.

Now on to what’s wrong with it. First up, it’s buggy. I killed a guard in theopening level and he stayed hovering in mid-air and this was nothing to do with’bullet time’ as I replayed the level and he just lay dead on the ground likehe was meant to. As for that special effect which came to the fore in theoriginal movie, Max Payne managed to pull this off much more effectively.

There’s a very average game engine here with moderate graphics, but ones thatare poorly executed and nothing out of the ordinary whatsoever.

The camera angle can be incredibly poor when fighting close to a wall or crateas you or the enemy can get blocked out of sight – and at any other time whereyou can’t see ahead, the view switches to a fancy side-on appearance, stretchingthe graphics a bit to make it appear to fit in with the film. The camera also#changes angle randomly during a fight as well. Did anyone play-test this?

In addition to this, we have appalling game physics, as you thump an enemy andthe baddies fly across the room like a rag doll. Come on – put up some resistance! 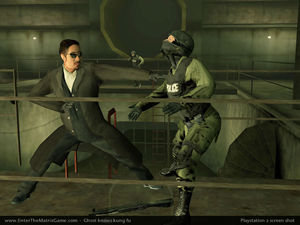 On with the onslaught, and if you jump while running about, your charactermay as well be Lionel Blair the way he skips around. Kick someone along theground and it must be a highly-polished floor surface as you can push themalong as if it’s a game of curling.

The soundtrack in the background jitters from time to time as it plays, andthe gameplay is all so linear, with one key annoyance that many games suffer- why bother having doors placed in walls if they’re going to be locked?

Enter the Matrix was the game with which Infogrames made the change to rebrand themselvesas Atari, long since known as the Japanese gaming maestro and creatorsof my first console in the early 80s, the Atari VCS 2600. Hopefully they’llmake amends by following up this tripe with a complete retrospective of thatgeneration’s games in one package. Please!

If you still follow the adage that you have to find out what the matrix isfor yourself, then rent it first. If you buy this dog of a game then you onlyhave yourself to blame.