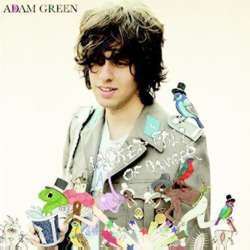 Adam Green is casting a huge shadow over his contemporaries.

Just when it seemed that great singers were out of fashion, up pops AdamGreen. This fourth album from the Jewish-American troubadour is quitemagnificent. The twenty-four year-old New Yorker first surfaced with bandthe Moldy Peaches. His solo career began in 2001, since then becoming a bigfavourite in Europe, particularly Germany.

In true cavalier style, he’sboldly going places where artists of his age wouldn’t dare. His closestrival right now is UK singer-songwriter Richard Hawley(ref Coles Corner, 2005).That comparison is based on the retro ground breaking style of musicand singing that both pursue. Hawley is dubbed the ‘Roy Orbison ofSheffield’. Green is more in the classic Scott Walker mould. Had he beenaround in the 60s, he would have been a mega-star. His distinctively richbaritone voice is a throw-back to a time when great singing was recognisedan essential quality in the business.

His music, a peculiar mix of Vegas cabaret and alternative indie folk, isspectacular to say the least, and slightly off-kilter. Each song is a kindof ‘operetta’ – mostly big style productions that would grace a blockbustermusical on Broadway, making Jacket Full Of Danger an audio delight fromstart to finish.

Starting with stylish string arrangements, Pay The Tollsets a formidable palate, rapidly followed by a pseudo-cabaret classicHollywood. Swinging like ’60s Dean Martin, a low-fi Vultures ticks alonggently, showing a crooner on top of his game. A punchy, playful and heavilyorchestrated Novotel keeps the pace going nicely, whereas the OTT Hey Dudeis an all-out showcase of his measured vocal gymnastics. The single, NatKing Cole is a real blast, cranking up the gears once more, taking a leafout of the Elvis school of Rock’n’Roll.

Taking a welcomed break, he allowsthe string and back-up singers to lay a solid Eastern flavoured foundationon C-Birds. Back to the 60s, he drops down again; resorting to Vegasballadeering on West Coast influenced Cast A Shadow. Country tinged JollyGood and Watching Old Movies throw in a new dimension to his flourishingrepertoire. Like a bat out of hell comes a Led Zeppelin riffed monster –White Women, with its John Bonham pounding drum technique, as his singinggoes off the radar.

Having done the hard work, he opts for a mellow acoustic closer – HairyWomen, which rounds off a very impressive album.