Fast Food Nation The Truth Is Hard To Swallow.
Distributed by
Tartan Video 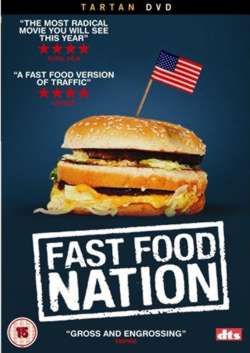 Eric Schlosser and Richard Linklater (based on Eric Schlosser’s book “Fast Food Nation: The Dark Side of the All-American Meal”) Burgers, chips and a Coke/Pepsi – who doesn’t love that?

All those people who are missing out, that’s who. Everything in moderation, though, sure, but there are certain times in your life when they really do hit the spot – for me, that’ll be one from Burger King where they make them fresh to order, not from McDonalds where they’ve been sat on the shelf for three hours since being made.

However, one thing that might put you off is how prevalent the issue raised in this movie might be, and that is the fact that there’s a problem with cow poo ending up in the burgers… Yes, you read that right. And as the film goes on, you could say that an alternate subtitle for the film would be, “It’s a dirty job, but someone’s gotta do it.”

So, Vice President of Marketing for burger chain Mickey’s, Don Anderson (Greg Kinnear), travels to Cody, Colorado where all the beef patties are made for the entire country, but that’s not all it’s about as we also follow the life of one worker, Amber (Ashley Johnson, who looks like a young Margot Kidder circa the original Superman movie), who’s making a buck or three as one of the staff at the same restaurant, and we hook up with her from the moment she comes face-to-face with Don while he’s out there. The two of them don’t meet again, but if you’ve ever wondered how someone’s life progresses after you’ve had a chance meeting with them, this is an interesting take on that. 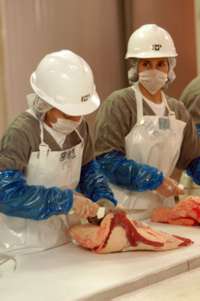 Fast Food Nation reveals some shoddy practices going on at the meat-packing factory, but then, can you blame the staff for doing it as we see Mexicans working for a pittance while being harrassed by the supervisor, Mike (Bobby Cannavale, who played Joe in 2003’s excellent The Station Agent), knowing that that’s the best job they’ll get for time being.

The killing floor shows cattle actually being stunned to death, as well as a very gruesome scene that follows, so one must presume that Richard Linklater got special dispensation for showing this in a proper movie. You also get to learn why those items on a 99p menu only cost 99p and all the bad habits that the staff get into who work at a Mickey’s. Of course, there *is* no Mickey’s in the real world, but it could just as equally apply to McDonalds, Burger King, Little Chef, you name it…

At one point, Don is given a tour of the place, but after being impressed with what he’s been shown, it turns out after a meeting with Harry Rydell (Bruce Willis), who’s an expert in the field, that he hasn’t seen what he really should see and Harry is the man he thinks will sort that out, as Don is a committed man to the job he has to carry out, but as time goes on he does start to question how much the men at the top know what’s going on and what the implications could be for his career and the company as a whole if he was to expose the practice.

Fast Food Nation has many well-rounded characters with some excellent acting, particularly from all the actors named so far, as well as Patricia Arquette as Amber’s Mum, Cindy, – despite the fact that Arquette is only 14 years older than the 25-year-old Ashley Johnson, although she is portrayed as having just turned 18, and the actresses playing Mexican sisters Sylvia (Catalina Sandino Moreno) and Coco (Ana Claudia Talancón, bottom-right). Plus there are engaging cameos from Bruce Willis, Ethan Hawke as Amber’s uncle Pete and Kris Kristofferson as a man in the know who tells Don, “The food your company sells is crap, total crap, even when there isn’t manure in it.”

Overall, this film is an eye-opener, for sure, but it won’t stop me eating burgers because they taste so damn good, even if a lot of it is faked, but then haven’t we all been eating things with food colouring and flavourings all our lives? 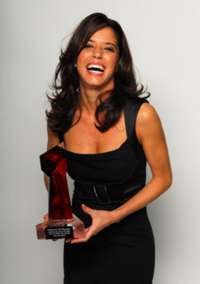 The film is presented in the original anamorphic ratio of 1.85:1, but looks quite grainy at times which is a shame. Okay, so a lot of it is shot on handheld equipment to give you a feeling of ‘being there’ but I’m sure things could’ve been improved picture-wise. Soundtrack options are available in Dolby Digital 5.1 and DTS 5.1, for which I always choose the latter, but largely it’s used for ambience and doesn’t often get a chance to shine, but that said there are no problems with it.

The extras are few and fair between. There’s a letterbox trailer (1:23) for the movie, plus interviews with director Richard Linklater (14:44) and co-writer Eric Schlosser (21:18), who also wrote the book on which this film was based, and that’s it. What happened to the 55-minute documentary, The Manufacturing of ‘Fast Food Nation’, which the IMDB describes as a “full-length documentary chronicling filmmaker Richard Linklater and author Eric Schlosser throughout their journey making the movie ‘Fast Food Nation,’ featuring Linklater and the cast of the movie in rehearsals, shooting, and interviews”?

There are 16 chapters to the film which isn’t fantastic for something that runs almost two hours, and what’s with the complete lack of subtitles? Well, there are some for those scenes shot in Spanish, but the English-spoken ones should be present also. The only plus to say in this part is that there’s a very clever main menu animation that shows cows going to slaughter, burgers going to the burger chain, people going into the chain and getting fat, lots of money going to the big business, only a small proportion of that going back into the original farm and the fat cats walking off with lots of money.

While this is a great film to watch – satisfying like a banquet – and should at least be rented out, the extras are nothing to write home about and, thus, buying this DVD for a penny short of twenty quid will feel like eating a McDonalds snack that will leave you unfulfilled (ooh, I should get a job writing headlines for the Sun!)