Final Destination 3 This ride will be the death of you.
Distributed by 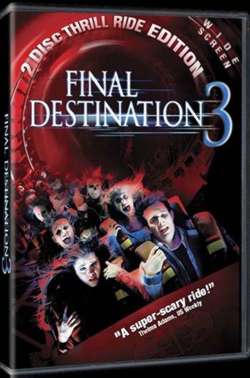 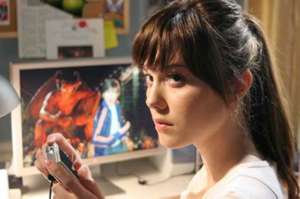 Three films in and with Final Destination 3, this one still knows just about how to deliver the goods in a deliciously gory manner as possible.

For this third outing, which had a working title that changed the film’s numeric to “3D” but which never seemed to materialise, this doesn’t include any of the original characters, unlike the premise of Final Destination 2, and the fresh cast of fresh-faced 20-somethings playing teenagers are just about to graduate from McKinley high school and celebrate their coming-of-age with a trip to the local amusement park where the highlight is a 190-foot-high rollercoaster named “Devil’s Flight”.

This movie’s central heroine who’ll survive the longest is Wendy (Mary Elizabeth Winstead, right), definitely the least cool girl in the school because she’s the partly-attractive nerd who’s taken control of the school yearbook and is snapping away with her digital camera at all of those who’ve turned out for the night including boyfriend Jason (Jesse Moss), her best friend Carrie (Gina Holden), her boyfriend Kevin (Ryan Merriman), weird goth bloke who happens to have the same surname as the school to which he attends Ian (Kris Lemche), his equally-goth girlfriend Erin Ulmer (Alexz Johnson, bottom-right), resident school perv Frankie Cheeks (Sam Easton), school jock Lewis (the bizarrely-named Texas Battle), drippy self-proclaimed cool girls Ashley & Ashlyn (Chelan Simmons and Crystal Lowe, below-right in the tanning salon pic) and Wendy’s younger sister Julie (Amanda Crew) who shouldn’t really be there but just tagged along with her friends anyway, because kids don’t do what they oughtta. 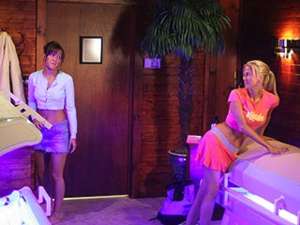 The kick this time is that once Wendy has had her vision about how the rollercoaster trip pans out and then starts to assess who’s still alive and, thus, is next in death’s plan to make them brown bread, she gets an inkling of how they might die from the photos taken on the night of the incident. Again, like my previous reviews of the films in this series, to go into detail any further would spoil the fun that’s to be had within.

Early on, this started to feel like it had a ‘Candyman’ feel about death being inescapable (i.e. sooner rather than later) and the end credits revealed that the voice of the Devil from the rollercoaster ride at the start is Candyman himself Tony Todd, who also played creepy mortician William Bludworth in the first two films and there’s also a character with the same surname in this movie too, but that’s about as far as a connection goes with no reference made to it during the film.

Overall, I gave this 7/10 as while it’s a worthy watch, it’s when you compare it to the first two that it doesn’t feel quite as inventive. Maybe this is where they’ll stop with this franchise so as not to dilute it further but as the two main characters, Kevin and Wendy, spend most of their time walking from one potential death scene to another trying to warn others about the links with the photos, it feels more like a series of set pieces rather than one whole film and, as such, you don’t feel the tension the characters are meant to be giving off but the end result can still be great for the time you’re watching it. It’s just afterwards that you’ll be thinking about how it wasn’t really as good in the post-watch analysis. 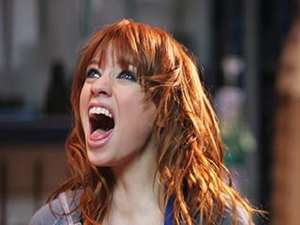 For the first time in this series, this installment is presented in an anamorphic 2.35:1 ratio. I get the feeling this was done because the wide frame would make all the rollercoaster shots look even more cool on the big screen and it also serves a nice extreme shot in Wendy’s bedroom where there’s a key element at each side of the screen, shot separately so they’re both in focus even though one’s in the foreground and the other at the back.

The sound comes in flavours of Dolby Digital EX 5.1 and DTS ES 6.1, the latter of which I listened to and when it really counts, it absolutely rocks. No doubt, like me, once a death scene occurs you’ll be rewinding it back a bit to check them out in more detail, but your neighbours will be less than impressed if you’re watching this late at night!

The following lists the extras, although most of it is of the ‘watch once’ variety:

There are subtitles in English only, a total of 18 chapters which is fine and a main menu with sound and a short piece of looped footage from the film that’s in keeping with the spirit.