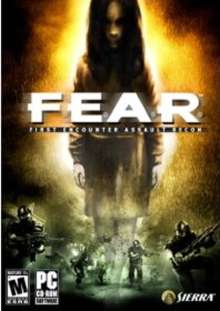 The premise for F.E.A.R., which stands for First Encounter Assault Recon is that something weird is going down at a multi-billion dollar aerospace compound where hostages have been taken with no demands issued and, so far, the military’s attempts to resolve it have ended only in their own men being wiped out and a massive, unexpected wave of destruction left all the bods at the top flabbergasted. So, who’s next?

Yep, you guessed it, it’s all down to you. Apparently you’re able to cope with all the paranormal stuff that’s going on down there and Derek Acorah is not on hand to help you out. 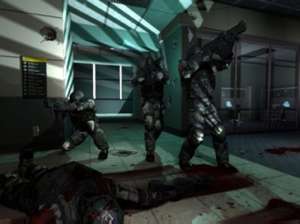 I do love a good first-person shooter and this is a highly entertaining one, for sure. Yes, there is a story to it but while it does force itself to be an integral part of the story, most of the time you can just get away with shooting, throwing grenades and having a blast. However, along the way as you sneak round corners looking for the next fire fight, strange hallucinations will appear before you, sometimes to end a scene, sometimes as brief flashes in front of you and sometimes they’ll manifest themselves as a dead soldier called Jankowski who spend his time moping around and disintegrating.

There’s also another character called Alma, a young girl who appears to dash across areas from time to time as you’re going through what is a fairly linear path – as it is for the majority of FPS games so no harm done there – and while some of this kind of thing does give you a jolt, such as when you open a door and a baddie appears to be there to run at you, only to vapourise as soon as you decide to discharge your weapon – it does tend to get in the way after several hours of gameplay. You also realise by then that you could do with more action; less weird stuff and more variety; less the same old soldiers always being there to shoot at you.

What is incredibly impressive, providing you have the PC spec for it, is how it looks and plays out. F.E.A.R. contains the right amount of detail to set the scene, allowing for clever lighting, nice touches like brilliant splinter and gun effects and just look at enemy bodies as they continue to shake after being shot to death, as if the blood is still pumping around for a while. Lovely!

Yes, it is important to stress that this game is going to tax your PC. I definitely think it would chug on the minimum spec of a P4 1.7Ghz and 512Mb RAM as you’d certainly have to turn down the amount of definition in the graphics. A 3Ghz processor is recommended, although if you’re running a dual core system then all the better as the prices for those are coming down now and you can get a reasonable machine for a good price as long as you don’t expect a shop like PC World to fulfil your requirements. Strangely, one of the requirements on the box is that you have a monitor capable of displaying a 4:3 picture. Why can’t they include a 16:9 option? Others do. 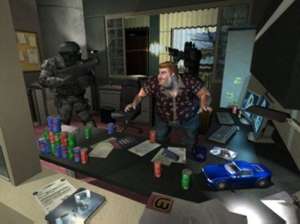 I’ll also stress that when you’re getting ready to play this for the first time, start installing it earlier in the day. The first thing it wants to do is get itself to the latest version and the update to v.1.07, at the time of reviewing, took almost two hours to download. Not fun and not expected.

The sound is loud and proud, although with no Dolby Digital 5.1 options, and when it comes to gameplay as well as it being mostly entertaining when played in short bursts of a couple of hours at a time, I liked the ability to do a Max Payne and slomo the enemies for a brief time, but there’s too much to do to press buttons, or even a combo of them for something like a scissor-kick, while using the mouse. Perhaps I’m just not adept at pressing so many buttons at once but when you die (frequently!) the game offers such tips, as long as telling you what to press, so you can try moves out that you aren’t familiar with.

Overall, while F.E.A.R. doesn’t try for anything original other than the paranormal angle, and the fact that it’s nowhere near as inventive as Half Life 2, it’s still entertaining all the same if you’re into first-person shooters.

I will say, though, that after a while, too many dark and gloomy places starts to do your head in. That was the same with the Half Life 2: Episode 1 offshoot, but the outdoor location of the bonus “Lost Coast” level, as well as similarly bright action in Sin Episode 1: Emergence, use a highly complex game engine to the best effect. What’s the point of trying to make it all complex and spooky if you can hardly see it? Switch a light on!!

Finally, for those who like to battle it out with humans there is a multiplayer mode and, for the completist, DVD-style extras in the form of a Behind the Scenes documentary, Developer’s Roundtable Commentary Video, the F.E.A.R. Live Action “Pre-quel” Movie and the Machinima Movie Series.