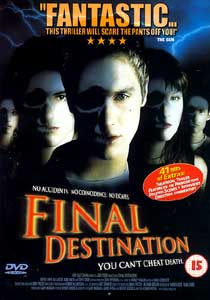 If there’s one film which won’t be playing on an airline near you, it’s Final Destination.

Alex Browning (Devon Sawa, a dead-ringer for Tad Reeves from Neighbours) has a vision, just as he and all his classmates have boarded a 300-strong passenger plane to Paris, that it’s going to explode. After kicking off and then getting thrown off, along with a few of his friends and enemies plus one teacher to supervise them until a later flight, he finds he was proved right. The plane blows up and everyone on board is dead.

After the mysterious death of one of the six remaining pupils, Alex and school recluse Clear Rivers (Ali Larter) break into the mortuary where the creepy mortician, Bludworth (Candyman Tony Todd), explains to them that death has a plan and it will track each and every one of them down. Can Alex save them all, or will every one of them be pushing up daisies by the time the end credits run?

To go into detail any further would spoil the fun that’s do be had within, but it’s safe to say that it contains plenty of shocks and surprises, more blood spilled than I thought was possible for a 15-certificate and the pace never lets up for a second which is quite a feat.

Presented in the original cinema ratio of 1.85:1 and being anamorphic, there’s no artifacts or defects of any kind to be found. It looks fantastic. The average bitrate is 5.74Mb/s, occasionally peaking over 8Mb/s.

The soundtrack is full on Dolby Digital 5.1 English, with scores of chances to shine in the form of explosions, surprises and other loud bits. If I was to define them, though, it’d spoil the best bits.

Extras : All of these are in 16:9 anamorphic widescreen.

These begin with 3 Deleted Scenes lasting nearly eight minutes in total including an alternate ending – although the one they stuck with was much better, a two-minute Theatrical Trailer in Dolby Digital 5.1 and The Perfect Souffle: Testing Final Destination, a fascinating 13-minute featurette which shows the process of using test audiences to mark which scenes should be cut or changed and why.

There’s a 20-minute Featurette on Preminitions, hosted by “Intuitive Investigator” Pam Coronado, two Games: “Your Psychic Eye”, in which you have to guess which card comes next (square, star, wavy lines, etc) and “Death Clock” which predicts when you’re going to die) and a feature-length Director’s Commentary.

Dialogue and subtitles are in English, with 19 chapters being a fairly decent amount. All the menus contain subtle animation and music from the soundtrack, with other weird clips between the menus.

I never thought about going to watch this film at the cinema because it featured clips of “customers” saying how wonderful it was, which completely puts me off. I’m glad I got hold of the DVD though because, while it’s complete bollocks in principle, it’s also 100% compelling. It also makes a change to see a great film which features no well-known actors.

With a number of decent extras and superb picture and sound, this is a must-buy.

Review copyright © Dominic Robinson, 2000.
[Up to the top of this page]