The First Wives Club
Don’t Get Mad. Get Everything.
Distributed by 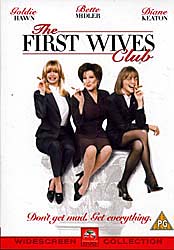 The First Wives Club stars three of Hollywood’s best-known middle aged actresses, Goldie Hawn, Bette Midler and Diane Keaton in a tale of three women, each of whom have spent their lives living for their other half, only to have it all thrown back in their faces 25 years down the line when they are traded in for a newer, curvier model.

Elise is an actress well past her prime, but still aiming for those underage parts by having every part of her body nipped, tucked, and lifted, not to mention having plenty of collagen injected into her lips. Brenda is a woman who spent her life doing everything to please her husband, and is now having to prepare for her son’s Barmitzvah. Annie is separated from her Advertising-Evecutive husband but thinks she can woo him back and the won’t have to cope with her daughter’s new-found lesbianism on her own.

First, best friends at college, they are brought back together by the tragic news that their other best friend, Cynthia (in a cameo role from Stockard Channing), has committed suicide after being endlessly taken for granted by her husband. After sharing their tales of woe, they decide that enough is enough, and form the First Wives Club, a plan to turn pain into gain by hitting their ex’s right where it really hurts – in the wallet. Once this is complete, their club is open to every woman who wants to exact revenge.

The casting of the leads is well-chosen, although the script was probably written with these three in mind. Goldie Hawn continues to look younger than her years, while Diane Keaton suits the frumpy, motherly type, and Bette Midler as the always-worried Jewish mother.

The always-welcome Dan Hedaya fulfils his comic role as Brenda’s ex, and Sarah Jessica Parker overacts enough to play his young plaything. Elizabeth Berkeley could probably do the same for Elise’s ex, but only gets to appear in two speaking scenes throughout the whole film.

The rest of the cast is fleshed out with Maggie Smith and Bronson Pinchot as the two people picked out by Elise, Brenda and Annie to aid them in the downfall of their ex-husbands, with Pinchot effectively reprising his role in the first and third Beverly Hills Cop films as an effeminate, obsessed designer. Marcia Gay Harden appears as Annie’s psychiatrist, and their are cameos from Rob Reiner as Elise’s plastic surgeon and Ivana Trump as herself telling the girls something from her own experience – Don’t get mad, get everything!

The picture is presented in an anamorphic 1.85:1 ratio with some artifacts noticeable and a general slight hazy look to it, which mars the entertainment to a degree. The average bitrate is a high 8.32Mb/s, often peaking over 9Mb/s.

The sound, in Dolby Digital 5.1 for English and German languages, has no room for faults as it comes across very clear at all times, although it’s mostly used for ambience, incidental music or American MOR songs used as a backdrop to describe the scene instead of dialogue.

Chapters : 36 chapters for the 98-minute running time which is excellent.

Languages/Subtitles : Dolby Digital 5.1 in English and German, whilst those of Hungarian and Czech origin only get a surround option. Subtitles are available in English (and hard of hearing), German, Swedish, Danish, Norwegian, Finnish, Dutch, Turkish, Arabic and Icelandic.

And there’s more… : A two-minute theatrical trailer only.

Menu : A basic static and silent menu with a shot of the front cover and the usual options.

Overall, the main thing lacking in this whole package is at the hands of the film itself. The film doesn’t really live up to the idea and drags on by 15 minutes more than it needs to by causing Elise and Brenda to have a bust-up and a name-calling session, following the announcement of Brenda’s ex getting engaged to his “pre-schooler” and Elise’s continuing alcoholism bringing things to a head, before eventually getting things back on track. There are, however, a number of clever one-liners and situations early on in the film, although given the subject matter this is more a film for women than men.