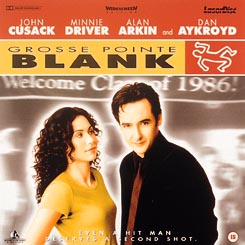 Grosse Pointe Blank is a black comedy, with a title spoofing which stars John Cusack as Martin Blank, who graduated from high school in 1986 and found a lucrative career as a hit-man, rather a different career to his High School friends who became respected professionals.

Now Martin’s job has lost its appeal and he faces an uncertain future. Travelling back to his home town of Grosse Point to attend his ten-year High School reunion, he has to complete one last “job” – the details of which he is not happy to hear about – and take another shot at rekindling a romance with the girl he stood up on prom night.

In addition to the proceedings, a rival assassin, Grocer, wants Martin to join a “union”, although he has other ideas.

This film stars two of Hollywood’s most prolofic actors, both of whom have made their name in comedy and have appeared in two of my favourite comedies during the decade when Martin Q. Blank graduated. John Cusack showed Daphne Zuniga how to have a good time on the way to meeting his “Sure Thing”, while Dan Aykroyd‘s chequered career hit a high point in Ghostbusters and his other great comedies include The Blues Brothers and Trading Places.

Two who stars are definitely on the ascendancy appear here. Firstly, Minnie Driver as the love interest who appeared in the low-budget Big Night and Circle Of Friends, the Channel 4 drama The Politician’s Wife and the recent Oscar-winning Good Will Hunting. Secondly, there is Hank Azaria as one of the hitmen on Martin’s trail, who is one of the cast in the 1998 summer hit Godzilla and provider of many voices on The Simpsons including Moe the Bartender and Police Chief Wiggum.

There’s just one cast member here who I could do without, namely John’s sister, Joan Cusack as his assistant who works from the office. I don’t think she’s the greatest actress who ever lived and her efforts here don’t impress much either.

Finally, there are also roles for other members of the Cusack and Armitage family, as well as co-writers D.V. DeVincentis and Steve Pink.

The picture quality is excellent, with crisp, clear colours brought out best in the day-time scenes. It is also presented in its original widescreen ratio of 1.85:1.

The sound comes across very clearly. It’s mainly used for dialogue, but its second function is for music. As the film is centred around a 1986, all the music comes from that era in the form of an “all-80’s, all-vinyl weekend” as broadcasted by our heroine. Finally, there is also the occasional shoot-out to give your speakers a bit of exercise as well as a punch-up set to The Beat’s “Mirror In The Bathroom”.

At just 15 chapters throughout the 103 minutes it’s not enough. I don’t see why they can’t add on an extra chapter apiece for the opening and closing credits, not to mention the fact that Chapter 2, “Botched Plan”, starts over six seconds late into that particular scene.

Also, why is there no trailer or any extras at all?

Overall, this is a very entertaining black comedy with a few slow moments, most notably when the plot gets around to the reunion itself, which looks and sounds good, but with zero extras. If you just want the film then that’s fine, although for my money it could do with some more thought in the overall presentation. FILM : ***½ PICTURE QUALITY: ***** SOUND QUALITY: **** EXTRAS: 0 ——————————- OVERALL: ***