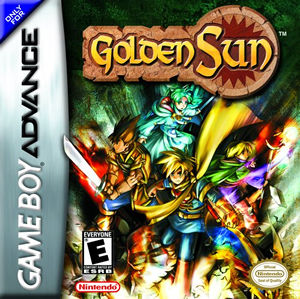 Whereas the Gameboy Colour has recently seen Pokemon Crystal released, so the GBA gets its own complex and lengthy RPG for you to explore with Golden Sun.

The game is set in the town of Vale, situated at the foot of Mount Aleph. Stirring up trouble, as well as the four elements – Earth, Water, Wind and Fire, in spirit form known as Djinn – is an unseen, mysterious being screwing about with alchemy. For years he’s been kept at bay, but now he’s unleashing unholy terror and chaos down your way.

You can work out what’s going to happen next. It’s up to you to run about, talk to people and locate some kind of solution to sort the bad guy out, helping others out by the use of Psyenergy, or saving it up for a battle as an alternative to attacking the baddies the usual way. Psy points can be later gained by staying at an Inn or picking up certain objects, for example. Graphically, this looks superb on the Gameboy Advance and far better than the aforementioned latest Pokemon incarnation, with great textures usually reserved for console connected to a TV set. That said, one thing I’d like to see possible, since the GBA will be able to be used with the Gamecube as a controller, would be to play this through a Gamecube onto a TV screen. Any chance of this Nintendo?

The sound heard through headphones is rather a treat with a funky stereo soundtrack that complements the movement onscreen and I like the effect of the thunder and lightning. Of course, it doesn’t compare as well to that of a regular console, but for a hand-held it’s quite impressive. 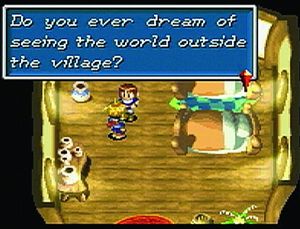 There’s few problems to do with playability since it’s very easy to control the game. It’s just a case of how used to this sort of thing you are.

Is there anything bad about this game? Well, unless you’re a die-hard fan of RPGs it can get a little tiring spending too much time looking into pots and boxes and finding nothing, but the good thing about a game like this is that it’s something I can dip into from time to time while I’m out and about waiting for the world to turn.

Finally, I didn’t mention that earlier that there are five characters you can take charge of in the game, with differing abilities centreing on the elements, but from the pictures in the manual, I have to say that 17-year-old Jenna is rather fit 🙂