The Hitchhiker’s Guide To The Galaxy Don’t panic.
Distributed by
Touchstone Home Video 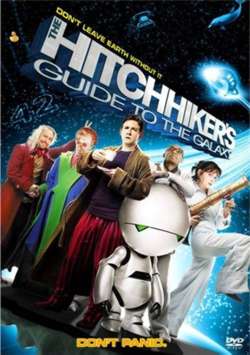 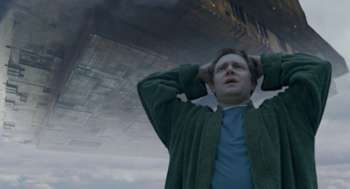 When the movie version of The Hitchhiker’s Guide To The Galaxy was finally turning into a reality after over 20 years of discussion, I had trepidation about it.

I was a massive fan of the original TV series and didn’t think the movie would be able to carry it off at all. Sadly, I was 100% correct.

The basic premise is that everyman Arthur Dent (Martin Freeman, right) is already having a bad day when he awakes to find his house is being knocked down to make way for a bypass. Things take a far worse turn by lunchtime when the Vogons turn up to destroy the Earth to make way for an intergalactic hyperspace bypass. Inbetween, his old friend Ford Prefect (Mos Def – who?), turns up and reveals he’s not of this planet. As the story progresses, he winds up on board a stolen spaceship, The Heart of Gold, with the President of the Galaxy, Zaphod Beeblebrox (Sam Rockwell) and his assistant Trillian (Zooey Deschanel), who Arthur has met before.

Arthur and Ford ended up on this ship by accident, but there’s plenty for them all to talk about. There’s plenty more to the story, too, but regular fans will know the rest and it’s enough for newbies to get started. And those newbies should be told that the following review will contain some spoilers, although in my mind it’s just a series of bad points where it all went wrong. 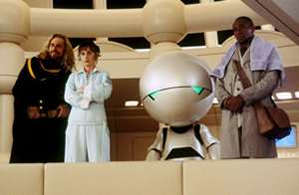 It starts badly as the credits roll with the opening song, “So long and thanks for all the fish” song. I hate it.

There’s just a complete lack of conviction in all the delivery of the dialogue, as well as the ripping apart the dialogue between Arthur Dent and foreman Mr Prosser, in an early scene, to just a couple of lines rather than a long discussion about exactly where the bypass plans are. Similarly, a lot of the dialogue is rushed so they can get to the next scene all within the allotted time.

There’s no Dentrassi, no Ford & Arthur turning into penguins after being thrown into space, no Gulgafrinchans, no Restaurant at the End of the Universe (except a mention of it where time is mistaken for space), the new Marvin (voiced by Alan Rickman and shown right, with Zaphod, Trillian & Ford) just sounds bored instead of depressed, there’s a guest appearance from the real Marvin, from the original TV series, Zaphod’s second head is now under the first one, not by its side, and what was that woman staring at Arthur & Ford in the bar for in an early scene?

Other things are moved about, such as Zaphod introducing the Deep Thought computer (which looks crap, by the way) to Arthur, Ford and Trillian, rather than Slartibartfast to Arthur alone – not to mention the fact that it all zooms by too fast to make sense; the “Do Not Push This Button Again” sign; and the location of where Arthur, Zaphod, Ford and Trillian have a meal hosted by mice. 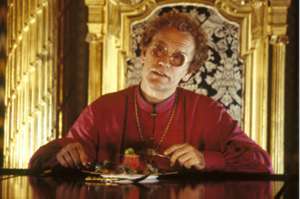 Martin Freeman mainly plays reaction roles, so you’d think this would suit him, but the key words here are “lack of conviction” for everyone. Mos Def is a waste of space as Ford Prefect, Sam Rockwell is the only passable actor here but his character gets too nasty at times compared to the original, and while I like Zooey Deschanel (below-right with Marvin), here she’s just another American girl-type character. Bill Nighy plays himself, Stephen Fry doesn’t sound authoritative enough – although his reading of the Harry Potter audio books will win kids over here – and the guide’s graphics are too garish and stark and Helen Mirren sounded like she just phoned her performance in.

John Malkovich (right) appears as Humma Kavula, a character created by Douglas Adams especially for this movie. Not quite sure what for because while they have to go and retrive a special gun for him from the planet Magrathea, they never return to him with it.

There was a brief respite from the junk when Simon Jones, the real Arthur Dent from the TV series, appeared as a 3D hologram warning our heroes, as they travel in the Heart of Gold, to stay away from Magrathea because it was closed.

However, as I stated it was brief, because as things draw to a conclusion, the mice appear and declare they want Arthur’s brain, which in the TV series they wanted so as to rebuild the Earth. Erm… it’s been rebuilt by this point so this moving of location and topic is totally redundant.

In additional, when the Vogons turn up again at the end and are easily defeated, well, that’s just piss-poor.

Any good points? Well, Zooey Deschanel is very cute indeed, as she was in 2002’s The Good Girl and there are some nice touches like a machine that detects what you’re craving and makes it for you and a knife that toasts bread while you’re slicing it.

Overall, though, it’s just been turned into a love story between Arthur and Trillian and it’ll make no sense for kids who have never seen the original and are trying to take in too much information at the same time. It’s clear that the screenplay adaptation has gone all-to-cock since its creator died, so Douglas Adams must be spinning in his grave! 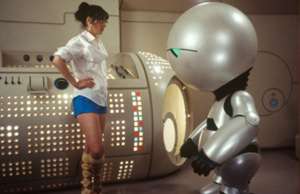 The picture is presented in an anamorphic 2.35:1 widescreen ratio and there’s very few complaints with that. It’s colourful and bright, with crisp, clear definition throughout. However, there are one or two moments where the picture stutters a little bit – nothing that’s a deal-breaker, but still not perfect. At least Garth Jennigs frames all the scenes perfectly in 2.35:1, so when it gets cropped to 16:9 on TV it’ll really suffer, but then he’s previously worked on excellent pop videos such as REM’s Imitation of Life and Blur’s Coffee + TV.

That said, the movie was filmed in Super 35 which can allowed for an open-matte 16:9 transfer, as the deleted scenes show, but the CGI effects will not be open-matte, unless these have been filmed with that in mind, such as with 1996’s Independence Day.

The sound comes in Dolby Digital 5.1 and DTS 5.1 flavours. I always choose the latter when given the option and that doesn’t disappoint either. The whole film is loud, loud, LOUD!!! For those dialogue-only parts, it’s clear and concise, and there are some VERY spicy sub sounds in the Earth’s destruction. In fact, for the first time ever, I had to turn down the volume on it because it was straining not to pop – far better sound than the graphics that time, in fact.

There’s also an audio descriptive track, a welcome addition to any DVD for those who can make use of it.

Extras wise, there’s a number of different things on disc one:

On top of that, the dialogue and subtitles are in English only, the latter being for the hearing-impaired, there are 24 chapters which is a decent amount for this movie, and the menus are done in the style of the new guide’s appearance.