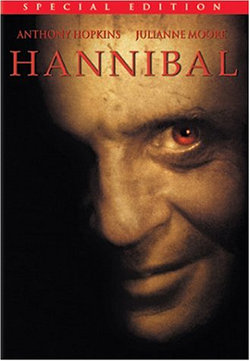 NOTE: This review contains a screenshot from the film which may spoil the plot for those who haven’t watched it. If you don’t want to see the picture, turn off images from your browser menu and click ‘Reload’.

One of Hannibal‘s opening scenes shows a bungled FBI raid on an HIV+ female drug-dealer, for which the organisation is to be brought to book after enough cock-ups to make even Denis Norden blush that stretch all the way back to the Waco incident in Texas in 1993.

But there’s a way out for Agent Clarice Starling (this time played not by Jodie Foster, as she had other things to do, but by Magnolia‘s Julianne Moore). In return for her name being left out of the firing line, with a little help from man from the justice department Paul Krendler (Ray Liotta) – and you can tell there’s something shady about him from the off – she must reinvestigate the case of Hannibal “The Cannibal” Lecter (Anthony Hopkins), as there’s a man who has some vital new information.

That man is wealthy and perverted Mason Verger (an unrecognisable Gary Oldman), Lecter’s fourth victim and the only one who survived, albeit ending up horrifically disfigured and when you find out how it happened it’ll turn even the hardest stomach.

However, not all the info is there and she requires the help of Barney (Frankie Faison), a psychiactric care worker who was employed at the hospital that has held Lecter for six of the past ten years. Of course, he’s gone missing since then, so where could he be?

Meanwhile, in Florence, Italy, Inspector Rinaldo Pazzi (Giancarlo Giannini), a once-celebrated cop after the “Il Mostro” case but has since come down in the social standing of life, is rather concerned with a man claiming to be Dr Fell, the latter of whom evades the question of explaining the disappearance of his predecessor…

Anthony Hopkins acts in the same style as he did last time and does so apparently effortlessly, while Moore is okay as Clarice but, apart from the occasional throwing in of a Southern twang in her voice and other people mentioning her meetings with Lecter last time, it could just as easily be another character in the role.

Overall, Hannibal is a very well-written and competent thriller, but like the prequel, Silence of the Lambs, it probably won’t stand up to repeated viewings as well. What is surprising though is that for a film based ten years after, it’s actually been filmed that length of time later as well. Compare that with the ridiculous premise of 2001’s The Mummy Returns being made a mere two years after the previous film, yet also being set ten years later. 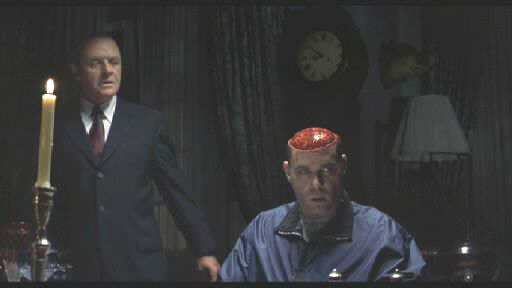 Ridley Scott defies his usual convention of a 2.35:1 aspect ratio and plumps for 1.85:1, in keeping Silence…. He still manages to make every shot look splendid and note early on, the brilliant opening titles with Hopkins’ face appearing as the pigeons settle on the ground. Subtle, yet extremely effective, right down to the twinkle in his eyes. Hpwever, this anamorphic print suffers from grain in some scenes – and even some flickering in a couple – which is rather a shame given that from the age of the film it should be perfect. The average bitrate is a high 7.75Mb/s, often peaking above 9Mb/s.

The sound is in Dolby Digital 5.1 and DTS 5.1. Very rare that we get both versions on the same disc, but that explains why the extras are on disc 2. It’s certainly worth it, though, with the shocking moments delivering enough power and the softer ones coming through perfectly clear, usually with the classical music that soothes the savage beast that is Hannibal Lecter.

The fantastically-detailed extras begin with Breaking the Silence: The Making of Hannibal, a near-75-minute piece broken down into five separate featurettes: Development, Production, Special Make-Up Effects, Music and Reaction. There’s chat from principal cast and crew members. The first part includes how Hopkins retired from films in 1998 but would only be wooed back if the script and director were right – and the surprise when Jonathan Demme passed on the film, while the second takes us round Florence. For the next bit, would you believe the special FX guys got their fake boar head by bidding for it on eBay?

The Music section finds it’s Hans Zimmer‘s time to shine with his excellent score and the last featurette gets professional opinions at the Los Angeles industry screening held on February 1st earlier this year and the New York Premiere held four days later. I’m quite glad I wasn’t at the first one (yeah, as if I’d ever get the chance!) because the audience don’t half whoop and cheer when something happens, which is why I prefer to watch films on DVD at home without scores of people making a racket. All of these featurettes are shot in 4:3 with letterboxed 1.85:1 clips and 4:3-centre-cropped clips of the film, the former of which was making my widescreen TV jump back and forth as the screen changed.

Three Multi-angle featurettes are included too. First one of the Art of Storyboarding which features an exclusive 9-minute interview with Ridley Scott and you can choose between the storyboard, a shot of the storyboard and the film scene it portrays at the same time, or both together with Ridley in view talking. It’s best here to go for the second option (angle 3 on the DVD) so you can hear him as well as seeing the clips in full view.

The multi-angle breakdown of the fish market shoot-out runs for 10 minutes and shows the scene from four separate cameras, with a fifth angle option to check out all four at once which is the one I selected. Finally, comes the near-2-minute opening credits sequence broken down into four separate angles and four separate audio feeds, each of which are interchangeable. The angles are: Final Title Design, Original Teaser Cut, Shooting Pigeons, Nick Livesey’s Notebook (he being the creator of the sequence) and the audio feeds are: Final Theatrical Mix, Original Teaser Mix, Commentary by Nick Livesey and Commentary by Ridley Scott, the latter lifted from the feature-length director’s commentary.

There are fourteen Deleted and Alternate Scenes, each which can be played with director’s commentary or the original dialogue and totalling around 34 minutes in length, culminating in the alternate ending. I find the best way to watch these is with the commentary on and English subtitles for the dialogue so you can concentrate on both simultaneously. The quality of each of these clips is mostly as good as those left in the film itself, but sadly all of these are non-anamorphic and in Dolby Pro Logic sound only.

The Marketing Gallery section contains a 60-second Teaser Trailer a 2½-minute Domestic Trailer and 19 TV Spots – 11 running for 30 seconds and the other 8 for half that amount, all of which are in 16:9 non-anamorphic widescreen. There are scores of photos in the Rare Production Stills gallery, indexed by scene and covering the majority of the film and even the deleted scenes and also a selection of Unused Poster Concepts from three different designers, although I think the one they went with was the best of the lot as it’s less busy.

Finally, there is the feature-length Director’s Commentary as alighted to earlier and an Easter Egg depecting “Flashframes”, the brief bursts of film exposed from the time a director yells “cut!” to the moment the camera is actually turned off. The collection was assembled by associate editor Wes Sewell into a 3-minute montage along with the backdrop of an original song called “Clarice”, written and produced specifically for this by the film’s music editor Mark Streitenfeld. This section can be found under the “Breaking the Silence: The Making of Hannibal” section by clicking on the two up arrows next to the word “Music”.

For a Universal DVD released via Columbia we have more chapters than usual with 32. Subtitles come in 12 languages : English, Turkish, Danish, Hindi, Hebrew, Dutch, Finnish, Greek, Norwegian, Swedish, Icelandic and Arabic, plus extra subtitles for the director’s commentary in both English and Dutch. Most of the menus are static and silent, but the main one is well animated and scored in keeping with the opening credits as well as the motion shown between menus.