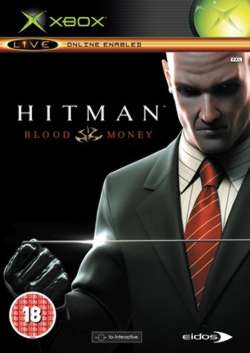 The baldy bitch-slapping bastard with big Ballers is back again!.

It’s been two years since Agent 47 last dispatched the baddies in a ‘silent assassin’ style, such that no-one saw it coming when they were about to meet their maker… or at least that’s the way it *should* be done but, when I cock this up, it’s like when you see such a murder plot go wrong in the movies and the victim-to-be makes good their escape and all you can do is chase them, put that bullet in their brain or inject them with a syringe full of poison and then hide the body in a darkened room so as not to attract suspicion.

However, take note that, while you can do what you want, when you want, without the game being restrictive, unlike the Grand Theft Auto franchise this is not a game where blasting out in all directions will help (although it is funny to do that just once or twice on a new level to see how far you can explore before being taken down). 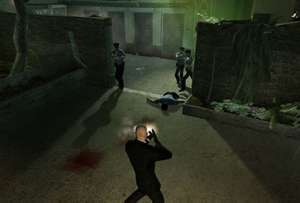 The second and third games in this series proved to be priceless entertainment as you crept about various locations across the globe, assassinating a guard by an entry point so you could dress in his clothes and go and kill that dignitary in his top-floor office. It’s even more of a task to ensure you don’t screw it up in a situation like that since if someone spots you doing the wrong thing at the wrong time then they’ll sound the alarm and you may as well restart the level, or at least go back to your last saved game point.

Actually, that was the problem with the first game, on PC only, since it had NO ability to save the level, so after quite a few attempts at the first level that was the end of the matter, since if you’re going to get topped relatively easily then it’s just not entertaining. When the sequel came along that aspect of it changed for the better and made it a game I would want to stick with.

In Hitman: Blood Money, if you’re a masochist then you can still choose the option to go without saves but I stuck with the ‘Normal’ difficulty which allows seven saves per level as well as help from the Agency from time to time. There is an intermediary stage of difficulty which just seems like cutting off your nose to spite your face, but for those who want to play it the easiest way there’s also ‘rookie’ where you can save as often as you like and what you do in one level has no comeback on you later, which is a shame as it’s the feeling of your actions having a significant impact later on which sometimes make you shit-scared as you play it (in a positive way because it ramps up your adrenaline level), and how often does a computer game have that kind of effect? 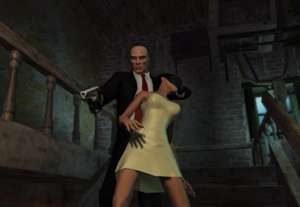 First thing for you to do is start the training level to sharpen up on your skills and get to grips with some of the new additions to this series, which I’ll mention later. The tasks you have to complete aren’t difficult in this one, but it’s a nice introduction to something so simple, yet effective, when you need to change into the suit of the chef you just murdered and can walk about without being spotted… but that’ll only happen as long as you DO walk. If you pick up his bread basket and run about like a wally then you’ll clearly attract unwanted attention. Just take it slowly – haste makes waste.

Your target is Joseph Clarence, the man behind a faulty ferris wheel at an amusement park that led to the death of a small boy, amongst many others. Right before you get your chance to put him out of his misery, you’re tasked with showing him a photo of that boy. Ooooh, evil! 🙂

The graphics aren’t massively different from before, but then they were perfectly fine to begin with, save for the occasional jaggie as you walk about, which it would’ve been nice to have seen erased so it loses slightly for that. Still, there are cool shadows as you move about, plus Very nice lighting and rippling water effects, plus lovely blood effects when you’ve murdered someone and they ooze out all over the floor, to add to the gore and violence that’s already aplenty. The info screens and onscreen display icons have been moved around a bit again but there’s nothing there that’s not tough to get your head around.

Soundwise, this is also first-rate as the alerts sound out when you’re spotting, the dialogue from characters talking to each other, plus the excellent gunfire – all in superb DD5.1 sound. 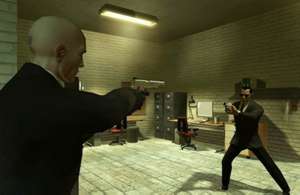 The only niggle is the control system which still takes some getting used to and you can still press the wrong button as you try to get to grips with it. Once again, blood splattering can be done in first-person as well as third-person view but I prefer the latter as that’s how the game has always worked in beforehand. Be careful, though, as when this was introduced in the third game it seemed possible to do this accidentally quite often which made for very disconcerting gameplay.

On the plus side, as well as shooting the baddies, stealing their clothes, the game having quick loading times and the ability to interact with almost everything, such as killing the lights.

In terms of new stuff, ’47’ now behaves more realistically. He can jump, he can climb, shimmy along ledges, take human shields, throw coins to distract guards from their post so you can sneak up and grab them to snap their neck, hide in a closet, shoot out locks on doors, rig bombs, steal surveillance tapes so no-one spots you’ve been where you shouldn’t have let them see you, punch, headbutt, kill baddies and throw them off high balconies and disarm enemies in hand-to-hand combat.

Also something that is new is that when your notoriety rating is high, it doesn’t just make everyone suspicious during the rest of the particular level you’re on, but will affect future missions. However, you can bribe officials at the end of each one so you can start the next one with a cleaner record than you ought to have.

And you the level does end, zoom in to read the newspaper headlines and the story that appears in front of you as it actually tailors itself depending on how many shots you’ve fired, baddies and innocents you’ve killed, etc.

Don’t forget at the end of each level to go to your hideout to stock up on ammo and go target shooting to hone up your skills. This was similarly available in the previous games but it’s not been done as well here, I feel, as you’re holed up in some underground cellar, rather than being allowed to walk about in the fresh outdoors, which was much brighter.

Oh, and just a note for Xbox Live users. I’ve since stopped subscribing to that service since I just don’t have the time to play on it, but as I understand it, the live option is mainly just for collecting scores and other minor bits and pieces, it’s certainly not an online deathmatch game with scores of opponents around the world all being ’47’, sadly. 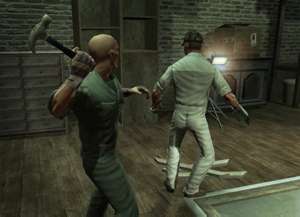 Hitman: Blood Money is a game that excels in the entertainment stakes because it allows you to be suave and debonair while not being too difficult in as such as when you get up close to something you can rig a bomb up to, it prompts to ask if you want to do just that, so you’re not left running around forever wondering what you can do where.

However, there are a few other gripes to this game. Be careful as you go, since you can accidentally fire sometimes so it’s good to save as when you go back to a game after a brief pause, if you’ve played flawlessly and then fire off a shot, you knacker things for yourself as the alarm is sounded, the guards surround you and your cranium is now devoid of blood and brain content.

Also, one thing I didn’t like came when doing things, which afflicted the previous release, like climbing onto a ledge, such as a window ledge, or leaping from one balcony to another, the game just took over with a cutscene to complete the move. Okay, so I know ’47’ is no Lara Croft, but it’s an action I would like to control for myself and smacks of dumbing down that I haven’t seen since I played Harry Potter and the Philosopher’s Stone on the PS1 and all you had to do to make such leaps was to walk up to the gaps and then let the game do it for you.

It’s still something that I can forgive the game for because the rest of it is so excellent, but please correct this for next time.