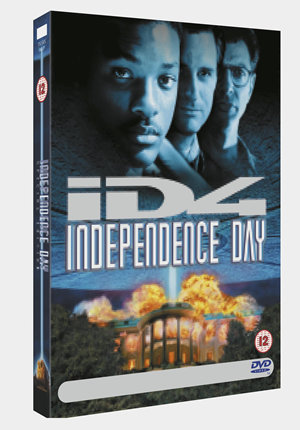 August 12th, 1996 – a day that changed my life forever. Yes, as I was driving home from work a woman jumped the red lights and crashed into my car. Somehow it was deemed my fault and my premiums shot up. Oh, and that evening I also went to the cinema to see Independence Day and had my ears blown apart when the aliens came to town.

On July 2nd the enemy positions its ships above strategic targets. Come midnight all of these landmarks will be blown into a billion pieces including the Whitehouse, the Empire State Building and the Vatican. Just about the only domicile left standing is, probably, Frank Sidebottom’s garden shed. What starts as a moderately serious film goes all stupid an hour in once Captain Steven Hiller (Will Smith) floors an alien ship and knocks him out, concluding “Now that’s what I call a close encounter!”. At that point, my jaw hit the floor in disgust as part of the film continued into farce.

There’s much to enjoy through the near-2½hr film, but while the first viewing made me rate it 9/10, subsequent ones were worth only 6/10 as the nitpicking begins: the American jingoistic speech from Bill Pullman as the President, the fact that President could ever be allowed into a fighter plane in itself and, as it’s a given that every character Pullman plays has a downer with the ladies, so his First Lady (Mary McDonnell snuffs it. We also have to believe that an Apple Macintosh could interface with an alien mothership and unleash a virus into their system (no such chance as Windows 98 needs a reset every two days on my PC!) and if the set of explosions that hit the planet at midnight on July 3rd can cause so much devastation, how come Vivica A. Fox is okay in the tiny alcove at the side of a tunnel? 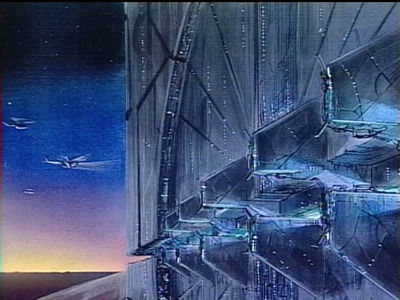 When it comes to the presentation of this film, it’s first-rate all the way. An anamorphic 2.35:1 widescreen picture really impresses in all the right places from the dark night time moments during the calm before the storm, right through to all of the action and special FX sequences where buildings are torched and everything else explodes.

The Dolby Digital 5.1 sound matches this evenly. Emmerich and Devlin were never known for being subtle, as Godzilla proved. Whether it’s David Arnold‘s rousing – and OTT at times – score, or the sound of the aliens attack in Time’s Up (chapter 26), Smith and co.’s First Attack on the alien ship (chapter 29) or the extreme deep rumblings as Smith and Goldblum leave the mothership (chapter 55), there’s perfect multi-channel surround sound through and through. 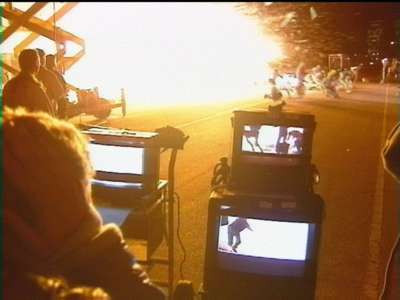 Explosive times on the set of ID4.

Released over two discs, the first one contains both the original theatrical edition plus an extended special edition with an extra eight minutes of footage, plus two audio commentaries: one with producer/director/writer duo Dean Devlin and Roland Emmerich and the other with Special Effects Supervisors Volker Engel and Doug Smith.

There are 57 chapters for the extended version (3 less for the regular), plus subtitles in English for the hard of hearing, Czech, Danish, Finnish, Hebrew, Hungarian, Icelandic, Norwegian, Polish, Portuguese and Swedish. The glorious animated and scored menus show the enemy ships entering Earth’s atmosphere and the destruction of the Whitehouse.