Jarhead Welcome to the Suck.
Distributed by 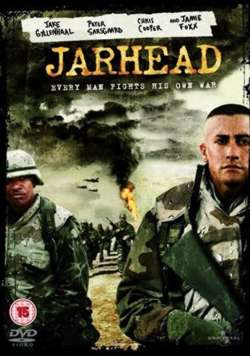 (based on the book by Anthony Swofford)

Jarhead is, as we learn at the start of the film, a slang term for ‘Marine’. This is due to the resemblance to a jar of the regulation high-and-tight haircut. The Marine’s head, by implication, therefore also a jar. An empty vessel. And, oh, how Swoff (Jake Gyllenhaal) is about to find this out…

The movie starts in early 1989 and Anthony Swofford, aka Swoff, enlists in the US Marine Corps, unsure of how things might turn out but he’s only 20 and it feels like the only option available to him. Sadly, it means leaving behind his beautiful girlfriend Kristina (Brianne Davis) but as long as he’s not away from her too long she’ll remain faithful to him, right?

Alas, since this is based on true events, it’s not long following their introduction to boot camp with Drill Instructor Fitch (Scott MacDonald) that they get word that Saddam Hussein has invaded Kuwait and it’s their task to go out into the desert as Operation Desert Storm is looming. The more headstrong of their number see it as their chance to see some action – and that such a thing will qualify them as a real Marine. However, on arrival they learn that all they’ll be doing is guarding the oil from the Iraqis and nothing whatsoever to help Kuwait get back on its feet.

As we follow their progress, or lack of it, the media come out to see the boys at play, which leads to an American Football match in their chemical suits courtesy of Staff Sgt Sykes (Jamie Foxx) and he also intructs them that they’re not allowed to divulge what they really think about the war when interviewed. Their equipment doesn’t always work properly, the boys hold a scorpion fight for money, and as day follows night follows day, we learn how they stop themselves from going mad as time takes its toll and a hopeful two-weeks-only out in the desert turns into many months as the film rolls on.

The queston is begged: Will they ever engage the enemy? That’s a question that can only be answered by watching the entire piece, but it’s something they desperately need to know since they’ve been trained as ‘scout snipers’, paired up such that when the time comes one of them will seek out the target and ensure that what the other is about to strike out at will be the perfect shot they’ve both been waiting for, which gives the ‘pink mist’ Swoff craves as bullet meets head.

Of the cast featured, Jake Gyllenhaal is a far better choice for the lead role than the others in the frame for it according to the IMDB, Tobey Maguire and Leonardo Di Caprio. Peter Sarsgaard takes second position in the actor’s trademark laid-back style as Swoff’s sniper partner Troy, while Oscar-winner Jamie Foxx plays Staff Sgt Sykes as, not a complete bastard, just a bit of one but enough to get the job done.

All of the actors playing Swoff’s fellow marines play their part well, with one not really standing out from any other and further established support as more commanding officers with 24‘s David Palmer, Dennis Haysbert as Major Lincoln and Chris Cooper as Lt. Col. Kazinski, although the latter only gets two brief scenes and while Cooper is a worthy actor it does seem odd putting his name above the title on the front of the box.

Clearly director Sam Mendes, who triumphed with American Beauty, but whose Road To Perdition I found very lacking, has an issue with the 2003 invasion into Iraq and the ensuing chaos and this shows, such as with the comment from one marine that it was the West who provided Saddam with his weapons to use against us. Personally, yes, Saddam was a bad sort and needed removing, but it’s been proved that there’s no viable alternative given the mess that has been put in situ by George W Bush and Tony Blair, a couple of complete fuck-ups who haven’t got a clue from the start of the day to its end. Shame on them.

I’ve seen films based around the Vietnam war before now, such as Full Metal Jacket and Platoon, but that one played out before my time. Seeing one about the Gulf War from 1989 onwards really does start to hit home. That said, while Jarhead makes for a very entertaining film, the impact of war films has been lessened by seeing the aforementioned movies put rookie recruits through their paces prior to going on to the job in hand. Also, it’s almost like a road movie as you follow events in a linear way – moving from one location to another, and once it’s over you aren’t left with anything lasting to think about; It just tells you that war is hell and once you’re out of it, the Army don’t really give a shit about you.

At the time of writing, just a few months after release, this one’s down to costing around a third of the RRP, so if you like the actors in this film it’s definitely worth a purchase. That said, anyone with money to burn might like to know that as Christmas approaches Universal are releasing this in the new HD-DVD format, more info on which can be accessed at the link above.

There are no problems with the picture or the sound. The former is flawless in a 2.35:1 anamorphic widescreen frame, really bringing out the atmosphere of the hot desert and the other environments they find themselves in, as well as when oil rears its head. The audio is in Dolby Digital 5.1 only, packs a punch when required but there are long scenes within where it just fulfils basic atmosphere.

The extras on this DVD are not great in number and all contain optional commentary from director Sam Mendes and editor Walter Murch:

Basic subtitles come in English, Arabic and Icelandic, there are 20 chapters to the film which is okay but not outstanding and the main menu features some incidental music from the movie mixed in with some images from it. Alas, before you get to that you’re presented with one of those stupid ‘anti piracy’ trailers which, thankfully, can be skipped through but do you really need that once you’ve bought the damn DVD? Then, you STILL don’t get to the film as you get a 2.35:1 letterboxed 3-minute trailer for King Kong.