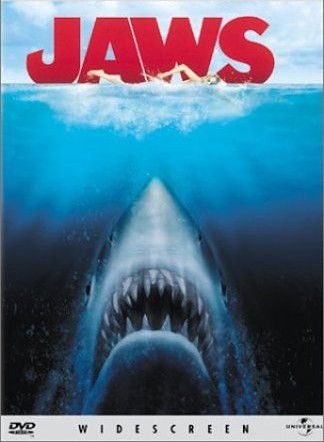 (based on the novel by Peter Benchley)

Captain Brody: Roy Scheider (2010, All That Jazz, Blue Thunder, The French Connection, Jaws 1 & 2, Klute, The Myth of Fingerprints, Naked Lunch, Night Game, The Rainmaker, Romeo is Bleeding, The Russia House)
Quint: Robert Shaw (Battle of the Bulge, Custer of the West, The Dambusters, The Deep, Force 10 From Navarone, From Russia with Love, Jaws, A Man For All Seasons, The Royal Hunt of the Sun, The Sting, The Taking of Pelham 123)
Matt Hooper: Richard Dreyfuss (Always, American Graffiti, The American President, Close Encounters of the Third Kind, Down and Out in Beverly Hills, The Goodbye Girl, The Graduate, Jaws, Mr. Holland’s Opus, Nuts, Stand By Me, Stakeout, Tin Men, What About Bob?)

Jaws is the classic thriller about a great white shark terrorising the population of Amity Beach leading up to the July 4th weekend as it chomps its way through the happy swimmers.

Where Steven Spielberg pulled off his masterstroke was by building up the suspense little by little. It starts with a young woman being eaten alive when she leasts expects it, then follows up with others being picked off one by one, all the time avoiding showing the actual creature – your only experience of it being viewing the action from its eyes. It’s not until halfway through when you’ll catch a glimpse.

Although all three principal actors have made a number of other films – and sadly Robert Shaw died in 1978 aged 51 of a heart attack – I haven’t seen them pull off any other film roles quite as well as this, especially when they come to form a trio and send the shark to its doom: Roy Scheider as Police Chief Martin Brody, Richard Dreyfuss as Matt Hooper – shark expert from the Oceanographic Institute – and Robert Shaw as maverick shark catcher Quint.

The picture is framed in the original 2.35:1 widescreen ratio and presented anamorphically. The whole width of the image is frequently used by Spielberg, although even when I’ve seen it panned-and-scanned on TV, the content of the film has easily hooked me in for the duration despite not being able to see the whole picture.

There are a number of flecks on the print, particularly early on and occasionally during the film. A thorough remastering could have cured this but most of the time it looks great for a 25-year-old print and it’s just so good to see this on DVD. The average bitrate is an excellent 9.8Mb/s.

All through my life I have only ever heard this film in its original mono. Now, the sound has been remastered in Dolby Digital 5.1, which benefits the action scenes tremendously with well-balanced surround effects bringing a new lease of life to the film, not to mention the clarity of John Williams enigmatic score. Oh and don’t forget Quint making his entrance scraping his nails down a blackboard! The actual explosion of the shark at the end does seem a little lacklustre though.

Chapters : Just 20 chapters for this two-hour film. I’d like more, but judging by the amount of extras, I’ll forgive them.

Note to subtitlers: the dog’s name early on is Pippet, not Tippet.

And there’s more… : First off is 3 Trailers, the first being three minutes long and in the full 2.35:1 widescreen ratio, whilst the others last a minute apiece and are in a 4:3 and 16:9 ratio respectively. There are 10 Deleted Scenes, all brief and most of which the film could do without, but I’d have left in the second one – an extended version of the scene where the boyfriend of Christine, the girl killed in scene one, gets to have his say. All of them have rather quiet dialogue though and it’s a shame the subtitles for the extras don’t extend to the English language. The Outtakes contain just two scenes – Quint saying his goodbye and Brody firing a gun which jams, causing Roy Scheider to shout “fuck”, thus giving the DVD its 12-certificate rating.

Amongst the extras, the daddy of them all is The Making of Jaws, a 50 minute featurette featuring comments and chat from just about everyone important, including Spielberg on how Quint’s USS Indianapolis speech was extended from the original novel to draw the audience in and Susan Backlinie, the aforementioned Christine, who went down in movie history as the first actress to get a bite of the shark’s success…

Want some pics? Take a look at the 720-strong Photo Gallery divided into four categories: Storyboards & Original Drawings, Production Photographs, Worldwide Marketing Materials and The Jaws Phenomenon. A few pages of Production Notes add some more background info, while the Talent Profiles tell you which films Spielberg has directed and in which films the three main actors have graced the silver screen. Shark World is just a few short pages of info about man’s not-so-favourite sea dwellers.

Anyone with a PC and a DVD-ROM drive will be able to make use of the Screen Saver and the Shark Trivia game rewards twelve correct trivia questions about the film with the result of a shark meeting an unhappy end. If you select “Get a Clue”, you’ll usually see a quick anamorphic clip of the film to provide the answer.

Menu : Just the main menu is animated with the calm ocean gently bobbing up and down and the sound of a buoy in the distance clanging away happily, the shot taken after the first killing.

Jaws is one of my favourite films of all time and Columbia have done us proud with this release. It sounds better than it used to and looks every bit as good as it should. The extras will keep you busy for a long time to come, although a feature-length director’s commentary would’ve topped it off nicely. 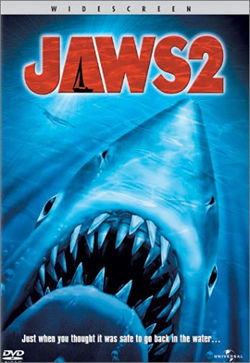 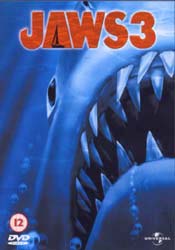 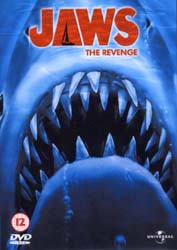