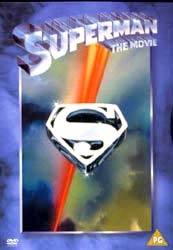 The most famous onscreen incarnation of the DC Comics superhero-cum-American cultural icon endured a lengthy, exhaustive and troubled production. It lasted from sometime in 1975 until just weeks before the film’s 25th December 1978 theatrical premiere.

Yet, despite all its behind-the-scenes shenanigans, the film proved a huge success in every imaginable way, spawning a franchise and making a star out of then-unknown Christopher Reeve.

Quite how – and indeed why – are questions which the wonders of DVD allow to be answered and explored in great detail. It’s only fitting that a film which on its original release more than 20 years ago, inspired such widescreened awe in a whole generation of youthful and impressionable movie-goers, still fresh from being blown away by Star Wars, should now be granted the full-on DVD treatment just as that very same audience has easy access to the kind of technology which can house such a plethora of footage and features as offered here.

Not only that, but the original print has been restored using, to quote the packaging, “a state of the art digital transfer”, while the audio element has been similarly bolstered to “dynamically remixed digital” level. Basically, this means Superman: The Movie now looks and sounds so clear and bloody fabulous that you’ll feel right back in that cramped cinema circa 1979 where you saw it first. Only without the sticky goo of trampled popcorn and sweets under your seat. In fact, it’ll look and sound even better than you ever remember it.

Many new release titles on DVD attempt to mask the deficiencies of the actual film by including all kinds of “bonus material”. However, if the movie itself is on the wrong side of turkeydom, no amount of in-depth analysis, background information or sundry revelations on exactly how the SFX team conjured up a CGI effect will change the enduring perception of “yes, I’m sure a lot of people put a lot of work into this film, but it still stinks… why didn’t they spend more on the damn script!”. Or something.

Where this anorakian (okay, I made that word up) approach excels is in the realm of *classic* movies, ones which have long since proved their artistic qulaity and/or cultural significance. They are simply WORTH talking about, and all the deconstruction serves to enhance and supplement the viewing experience rather than emphasise the film’s shortcomings. So it is with Superman: The Movie.

For a project that had its roots plainly in comic books, the presence of so many established and respected legends in the cast of Superman seems, even now, somewhat surprising (it couldn’t possibly have been the money that attracted them, of course). The opening credits sequence is visually magnificent in its effective simplicity, but also incredibly LONG. One wonders if in today’s climate, such extravagances would be allowed.

Some of the peripheral names seem to vanish from the screen before you’ve had a chance to read them, which is unfortunate but in fairness only to be expected when the likes of Brando (off the back of The Godfather), Gene Hackman (still hot from French Connection II), Terence Stamp, Trevor Howard, Ned Beatty, Jackie Cooper, Glenn Ford, Susannah York and Christopher Reeve himself were ahead in the pecking order. Now that’s what I call a cast!

For the film to succeed, the story – and more obviously the various flying and displays of superhuman strength, had to be totally believable. Superman, the character, also needed a crediblity which the technology of the day had previously been unable to provide. Millions of dollars were squandered in persuit of finding a means of making Reeve appear to fly and run at high speed, but eventually the visual team cracked it.

In an age before CGI existed, before even George Lucas‘ envelope-pushing Industrial Light & Magic company had officially been created, the sheer artistry, invention and skill that went into the mind-bogglingly demanding visuals of Superman is something to behold. To bring some perspective to just how primitive the world of Special Effects was at the time, on British television they were still making miniature plastic models from hairdryers for Sci-Fi programmes.

A never-before-seen extended sequence where Reeve is bombarded first by flames and then by ice, looks mightily impressive even by the standards that would be set just over a decade later by the likes of Terminator 2, although the flight sequences can still at times betray their primitive “suspended by wires in front of a blue-screen” origins. That it convinces at all is entirely down to Reeve’s astounding performance in the red cape and boots.

There is a lot of backstory to digest before the fully-formed Superman takes, er, flight. The details concerning his arrival on Earth as a small child from a distant and advanced civilisation, dispatched illegally by his natural father Jor-El (a defiant, dignified Brando brilliantly portraying his character as though it were from Shakespeare), invest the movie with a sense of pseudo-Biblicial grandeur.

Following a pretty spectacular “disaster” sequence on the doomed planet, little Kal-El (to give him his Krypton name) and the audience are whisked off through the galaxy until his destination is reached. Cue the next major plot section, the formative years after his discovery by the side of a road in a small farming area of 50’s America. Grappling with the dilemmas arising from his extraordinary otherworldly “gifts”, Clark Kent (taking the name given to him by his adoptive parents on Earth) gradually realises his true destiny lies beyond running faster than an express train or kicking a football into the next county.

A quite beautiful, almost ethereal fulfillment of his learning curve bridges the developmental gap between the wet-behind-the-ears teenage Kent and a fully-formed, airborne, Clark/Superman who arrives in the bustling metropolis of, er, Metropolis a dozen years later. Then it’s time to get a job, lead a double life, rid the city of crime, and save the world (well, the west coast of America) from the dastardly plans hatched by arch criminal Lex Luthor (Gene Hackman at his withering, insiduous best).

No aspect of either the end-product or the process by which it painstakingly made it onto the screen is left uncovered. Superman’s director, Richard Donner (Lethal Weapon) – hired on the strength of his mid-70s chiller classic The Omen – has re-cut the movie so that it now features TEN added scenes seamlessly placed into the exisiting version. That’s why much of the opening half-hour often feels strangley unfamiliar, and why the total running-time now approaches a bottom-testing 2-and-a-half hours.

Extending the film’s duration has brought with it a greater scope, so that the feel, tempo and tone more closely resembles an old-fashioned three-act epic than a mere blockbuster. It is no longer in such a hurry to cut to the pacey Comic Strip-influenced section of the story in Metropolis – the world of The Daily Planet, Lois Lane, Lex Luthor et al.

There is also therefore a greater amount of Marlon Brando now present, as it is the previously brief early scenes on our hero’s home planet of Krypton which have benefitted most from the additions. One of the choicest moments on a fascinating three-part, 90-minute documentary contained on this DVD, sees footage of a late-70s model Brando justify the (then) unprecendented multi-million-dollar payout he received for 14 days’ work by comparing his market value to that of commodities such as Hula Hoops. Everything has its price, and actors are no different. Perhaps he’d seen the future of Hollywood.

It may also be a suprise to discover the original screenplay was written by Mario Puzo, hot on the heels of The Godfather II. Such heavyweights both behind and in front of the camera is testament to the pulling power of such a mythical icon, but probably has as much to do with the vast sums of money the film’s producers were prepared to pay in order to ensure their project would be a success.

Donner, for instance, reveals that he was offered a cool $1m to helm both Superman and a simultaneously-filmed sequel. The disregard of keeping the movie within a sensible budget would prove costly in more ways than one, but the results speak for themselves. Superman: The Movie is a timeless creation… artful, yet utterly accessible, entertainment for the masses.

Under intensely demanding circumstances, the film was completed on time (the initial plan of a summer ’78 launch having been abandoned), but the extraordinary 18-month shoot had bled the producers’ coffers completey dry.

Despite much of the projected Superman 2 having already been filmed at the same time as the first (due to the inflexible schedules of Brando and Hackman), the money ran out before completion, and the second movie was only finished after the commercial exploits of the first made it possible. Unfortunately by that time, Richard Donner’s services had been dispensed with due to irreprably decaying relations between him and his employers, meaning the franchise would never be quite the same from that point onwards.

Superman: The Movie is a two-sided DVD (film on Side A, extras on Side B), and also available as part of a smartly-designed double-pack that also contains Superman 2. The latter, given Donner’s central involvement with the first movie’s appearance on DVD, tellingly has no extra features to speak of. It makes for a slightly lop-sided package, with each disc occupying opposite ends of the “value-for-money” spectrum, but with Superman 2 effectively included for under £10 (the 2-disc set has a RRP of £29.99, but can be found for a good few £££s cheaper than that), and the second part of the series’ importance to the overall plot arc (i.e. it completes what Superman: The Movie begins), it’s the most tempting option.

Even by itself, Superman The Movie: Special Edition is one of the most essential Region 2 releases to date.

Check out Jason’s homepage: The Slipstream.