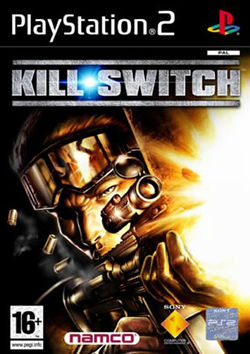 kill.switch is a game that seemed so basic in its concept that I really didn’t think I’d like it because in a sense it’s all been done before.

Take a game like Splinter Cell and Metal Gear Solid and give it a more arcade-style feel so you can run about with an easily visible cross-hair for easy targetting, but don’t add any of the panache of Max Payne 2, for example, and you have something that seems like it was rushed for release, but which still manages to be a surpsingly entertaining game and worth a rental at least.

One thing that is new, is the Offensive Cover System which allows you to keep cover while still launching frontal assualts on the enemy without being exposed to counter-fire, or in English, this means you can hide behind a pillar, or similar, and lean out to fire off a few rounds before turning back, so you avoid being shot full of holes. 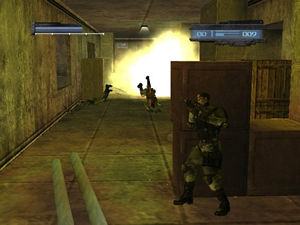 I wasn’t sure about enjoying this because on first starting up, the graphics see jaggies galore appearing onscreen as you run about environments which break no new ground and are fairly drab.

Add to this, sound effects which are nothing to write home about (guns and grenades and some thumping music in the background as if to exhibit some tension), plus controls that aren’t exact and the camera can be awkwardly positioned at times depending on where you are in relation to the scenery, but for all its faults, it does make for an interesting and engaging play.

Other bad points are that it includes those typical baddies who stand near explosive oil drums, just waiting for you to throw a grenade so they can pretend to run away. However, at least if you just shoot them a couple of times in non-fatal places they don’t die immediately so it’s a bit more realistic in that respect, and it’s also a plus that if you die yourself then the level reloads instantly, rather than some games which stupidly reload the current level in when it’s already there!

It’s also rather linear and you’ll certainly follow a roughly-set path to get to your objective for the level. 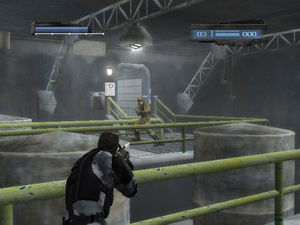 So, if you think you’ve been there done that and don’t really want more of this type of game, this won’t change your view but you’ll still get some entertainment out of it. Just forget the ’90s happened and think of it as a third-person extension on the ’80s arcade actioner Operation Wolf and you’ll do fine.

As an addition, this game also comes complete with an exclusive demo of SOCOM II: US Navy Seals and exclusive footage of Syphon Filter: The Omega Strain.

On a personal note, I did try to play SOCOM and install the PS2 online kit, but could never get the Network Adaptor to work with Pipex’s ADSL Xtreme Solo service, so if anyone has any advice, please email me.