Minority Report Everybody Runs.
Distributed by 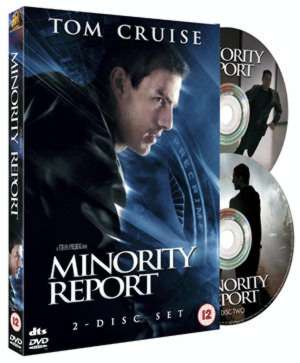 Minority Report has a simple concept, even if it may look a lot more complex in the first instance.

It’s the year 2054 and Detective John Anderton (Tom Cruise) works for the Pre-Crime divison, a police department which, for the past six years, has pre-determined every single murder in their district and enabled the law to stop each such crime before it’s committed. They managed it with the help of three “pre-cogs” – one woman and two men, now in their 20s, but when the government were putting this project together they were found, as children, to have the power to see the future, but they also end up seeing and feeling the pain of those who commit the murder. Big Brother is far more a way of life than it was in the film, 1984.

It’s a perfect system, until the point where it predicts that Anderton’s going to shoot a man dead called Leo Crow. Even the video footage of the event shows him pointing the gun, saying “Goodbye, Crow” and pulling the trigger. Just one thing – who the hell is Leo Crow? Anderton has no idea, which is what starts the chase with him on the run escaping from his colleagues, while trying to put two and two together and prevent the murder of Leo Crow, which sounds easy – don’t be in the wrong place at the wrong time, or isn’t it that simple?

Of course, to go into the plot further would ruin the surprises that follow, but I will say that I thought the ending was rather a cop-out, and the way things were heading about 20 minutes before would’ve been a far more satisfactory one. However, the acting is first rate from Tom Cruise, Colin Farrell – a man sent to investigate the Pre-Crime Divison, given that a vote is to take place in a week’s time as to whether the public agree with his operation and Britain’s Samantha Morton, as Agatha, one of the pre-cogs, who really deserves to take off as a much bigger star following this movie. 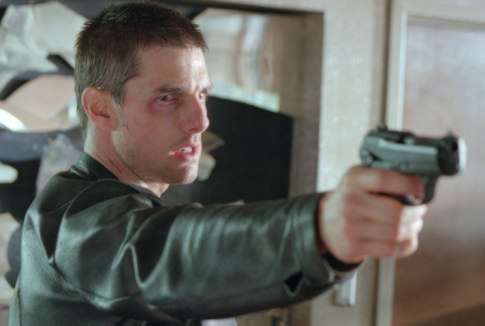 “Get me the director. I want to talk about the coffee!”

Widescreen is definitely the way to go here. It’s a sci-fi vision of the future which couldn’t be realised in anything other than its original ratio, that being 2.35:1, with a pin-sharp anamorphic widescreen image. At times, the picture will look a little washed-out or soft, but that’s an intentional effect of the film.

The sound is in both Dolby Digital 5.1 and DTS 5.1, the latter of which is the better and I have no complaints on that scale. Split-surround effects are fantastic in the action sequences and even the quieter moments are excelled with the John Williams score in the background.

There’s no audio commentary, but the extras are largely made up of featurettes which address all such issues and use film clips in non-anamorphic 2.35:1. The menus and sub-menus that split them up are brilliantly put together, giving a feel of the future whilst blending in clips from the film.

The extras disc is divided into six sections: