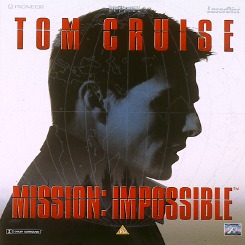 Mission: Impossible is the big-screen action remake of the classic sixties television series with a new cast, with new gadgets for the nineties, and a new version of Lalo Schifrin’s theme tune updated by U2’s Adam Clayton and Larry Mullen. The film also has an original score from Danny Elfman.

The story is quite complex for your typical Hollywood summer blockbuster, the film easily holding its own against 1996’s other offerings including Twister, The Rock and Independence Day. While I was impressed with The Rock, the other two films were tales of plentiful SFX strung together with little or no plot, even if they were an equally good workout for your sound system like this one.

The plot involves the Impossible Mission Force (IMF) on the trail of both parts of a NOC List, a record of all the CIA’s deep cover agents working in Eastern Europe, one half of which has been stolen by Golitsyn, a traitor within the CIA who plans to steal the second half from the Embassy in Prague. The NOC List is split into two for security reasons: the first part which Golitsyn already has contains the code names, but that half is useless without the other which matches up to provide the agents’ true names.

However, as double-cross follows double-cross, and the plan to apprehend Golitsyn goes awry, members of the IMF are getting bumped off at an alarming rate. The question is, as one of the few left alive, can Ethan get to the truth without getting caught as he’s been framed for the deaths of his espionage team? With Tom Cruise in the lead role, is that a question that really needs answering…

The film also contains some fantastic action set-pieces including a chase in the Channel Tunnel between a helicopter and the train itself, as well as what must be the most nail-biting scene in all the films made in 1996 as Tom Cruise and his accomplices attempt to retrive the NOC List from within a unit so secure it makes Fort Knox look like their having an open season. As they begin the operation, Tom Cruise whispers to his men, “From now on in, I want complete silence”. When I saw that in the cinema, not a single person made a sound, which is a rarity in the cinema these days.

For me, Tom Cruise is an actor who never fails to disappoint, and one who has been in the A-list since the role that brought him to fame, as Maverick in Top Gun, and who received an Oscar nomination for his latest film, Jerry Maguire.

If you’re wondering what happened to the original cast of the television series, they all declined to take part as the original plan was to feature them only in the opening scene before killing them off, and replacing them with a new team, and they felt they were worth more than that.

Hence, the 1990’s team is led by Jon Voight as Jim Phelps, who always has to listen to the recordings that are due to self-destruct within five seconds. First making a name for himself in 1969’s Midnight Cowboy, he has recently come to the fore again in films such as Heat and Anaconda.

The rest of the IMF team are rounded out by Emmanuelle Beart as Jim’s wife Claire; Kristin Scott-Thomas who appeared in the worldwide hit, The English Patient; Ingeborge Dapkunaite who starred in 1995’s Burnt By The Sun, Oscar winner of Best Foreign Film; and Emilio Estevez who for some reason appears in an uncredited role.

As Cruise puts the pieces of the puzzle back together he is helped out by two top-line actors who are now making their mark in Hollywood films, Jean Reno and Ving Rhames.

Henry Czerny is Kittridge, the man that the IMF team must answer to and who provides the voice in the film for the “This tape will self-destruct in five seconds”… who deserves to be in many more films than he has been given to date. Also in the extensive cast is established actress Vanessa Redgrave but I won’t reveal the name of her character so as not to spoil part of the plot.

The picture and sound quality of this disc are excellent, and the widescreen framing is essential for De Palma’s complex visuals. If you’ve only seen this in a pan-and-scan version on video, then you’ve not seen the film properly as it does no justice to the film’s tribute to the original series with its extravagant use of tilted shots.

Don’t be put off with the film being given a PG-certificate either. Despite some rather un-PG-like violence, the BBFC must like Brian De Palma as they awarded this film a PG-certificate in its uncut version, whereas the same film is a PG-13 in the USA (the equivalent of a BBFC 12).

The film comes on one disc, unlike the American NTSC version which is split onto three sides over two discs, and comes with a deluxe gatefold sleeve, the inside containing a shot of Cruise literally hanging by a thread, and a listing of the 13 chapters the film is split into. Yes, it’s only 13 chapters, which really isn’t enough for a film of almost two hours in length, but Pioneer LDCE have to comply with the same chapter stops as the USA NTSC release which also has 13. This is a minor quibble though considering all the plus points of this package, one of which is that this PAL version is actually cheaper than the USA NTSC version (which is priced at $45.00, the equivalent of £30.00 approximately. That’s one to tell your friends who might think that Laserdiscs are always more expensive than their American counterparts.

This review will self destruct in five seconds…