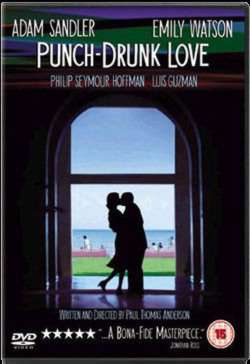 In Punch-Drunk Love,Barry Egan is a single man who works in a warehouse which sells bizarrenovelty toys, he has seven sisters, who snipe at him and call him “Gay Boy”because he threw a hammer at a sliding door window when he was younger andone of his sisters, Elizabeth, is trying to set him up on a blind date, orrather arrangement at a dinner party.

He has an obsession with collecting airmail vouchers from copious amounts ofpurchased pudding and also an incredibly violent temper, stemming from abad experience with a phone-sex chatline which triggers him off and wheredoes the D&D Mattress Man company come in to all this?

To detail more than that would rob the film of its shock value at times.This is an engaging and unpredictable one, but at 83 minutes beforethe end credits roll it ends too quickly and too many elements are leftunresolved.

However, while you’re caught up in it, this might sound a cliche, but it doeshave funny and touching moments. To see Adam Sandler in a film like thisis a real find. Normally, he’s wasted in one flaccid so-called comedy afteranother which, sadly, he gets paid at least $20m apiece for, so he has noreason to stop making those for now since he won’t have made a bundle from amovie like this, but it would be nice to see him diversify because hecertainly can cut it here. Emily Watson keeps to her English accentand is simply gorgeous.

Visuals are employed with a fantastic 2.35:1 anamorphic widescreen canvas, onwhich to paint an early morning scene during which Barry comes to own astrange harmonium left at his place of work, and later the clean and coldemptiness of a supermarket.

There’s excellent use of cutting sound at key moments in the film, whichsurprise when delivered – so I won’t spoil these here – but which punctuatethe tension perfectly. Fast-percussion background music heightens the tensionof each required scene.

All the extras come on disc two, but aren’t as abundant as one would’ve thoughtfor requiring a second disc. Any film clips are non-anamorphic:

Overall, some rather disappointing extras that don’t make a whole lot of sense.The director can get away with such abstract behaviour in the film but itjust looks odd outside of that.

The main menus are nicely animated and scored, in keeping with the effects usedin the movie at times and there are subtitles in English, Arabic, Bulgarian,Croatian, Czech, Dutch, Greek, Hindi, Hungarian, Icelandic, Polish, Russian,Slovenian and Turkish. What a bizarre selection? Perhaps if they’d cut downon those and not had as many DD5.1 soundtracks, all the extras could’ve fiton disc one. The film has but 22 chapters to divide it.Strangely, subtitles for the extras are in English, Dutch, Italian and Spanish.Why use different ones for the extras alone that aren’t used for the movieitself?