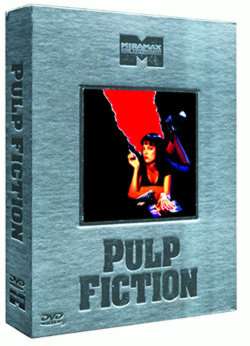 Pulp Fiction.After Quentin Tarantino‘s startling directorial debut,Reservoir Dogs,it was a frustrating three-year wait for his follow-up, but one that waswell-rewarded, and a film that I saw twice at the cinema, and just had to rentit out on video the day it was released, even though it would be a bastardisedpan-and-scan, cropping at least half the action.

For those of you unfamiliar with the story, it’s actually several storylineslinked together, played out, like Tarantino’s previous film, in an order that’sfar from consecutive, but in a way that works very well indeed.

John Travolta saw his career take off after a long dry spell, ashitman Vincent Vega, brother of Vic Vega inReservoir Dogs,and he’s partnered with bible-quoting Jules Winfield (Samuel L Jackson in a role thatalso brought him to the fore and for many movies since), who are contracted bythe ubiquitous Marsellus Wallace (Ving Rhames) to recover a briefcase,the contents of which are unknown and shine a gold colour upon whoever looksinto it. For the record, the contents were never officially revealed by Tarantino,thus making it seem all the more cool.

Vincent is also obliged to take out Marsellus’ wife Mia (Uma Thurman)on a date, which doesn’t quite go as planned like the above briefcase recovery,but to reveal the details would spoil the fun for those who have yet to watchit. 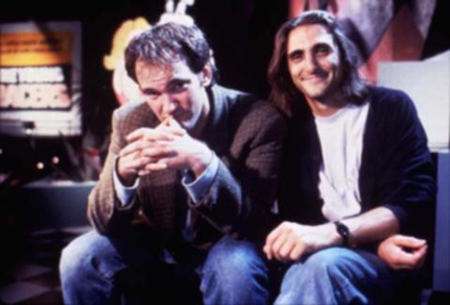 Elsewhere, there’s a young couple, known only as Pumpkin (Tim Roth)and Honey Bunny (Amanda Plummer), who plan to hold up a diner but chooseexactly the wrong moment at which to do it, and a boxer called Butch(Bruce Willis, pioneering the bald look he would have to use to good effectin later films) who’s paid to throw a fight by the aforementioned Mr Wallace,except he doesn’t and throw’s a hook that does his opponent no good at all,leaving him in a world of trouble.

The rest of the cast features great talent from the likes ofHarvey Keitel, Stoltz, Rosanna Arquette, Christopher Walken, Frank Whaley, and cameos for Steve Buscemi and directorQuentin Tarantino, but, again, to give more info would spoil things.If you’ve seen the film before, you’ll know what to expect, and if you haven’tand enjoy well-written thrillers, make this your next choice.

This film also set a precedent in that it features characters just going abouttheir business, talking about completely-unrelated things like what a hamburgeris called in another country, and making that seem cool. Many scenes, includingthat one, also went on to be spoofed from here to eternity in several filmsand programmes, such as The Simpsons. Tarantino also made an art ofjust keeping the camera static, at times, to film a scene whereas many otherdirectors would just cut from shot to shot too much. 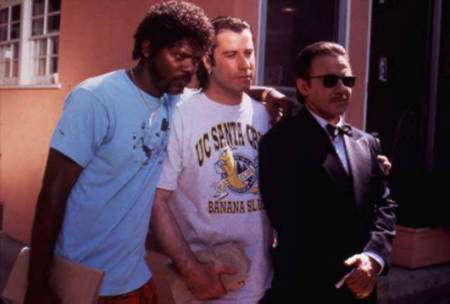 Vincent and Jules hang out
with the Wolfman (Harvey Keitel).

Crystal clear picture and sound quality is the order of the day, apart fromBig Kahuna cheeseburgers, with an anamorphic 2.35:1 widescreen image that haszero defects and is perfectly sharp. Anyone who saw the film in pan-and-scanwill know of the dreadful panning effect attributed to the surprise bulletin an early scene as the panning shot across the room, destroying the moment.

Sound comes in Dolby Digital 5.1 and DTS 5.1 flavours, the latter of whichwill always have the edge, and brilliantly reproduces the the dialogue, thethumping tunes, and the gunfire that’ll pop your ears.

Also on disc one is a trailer for the Jackie Brown Collector’s EditionDVD, which seems to have a jittery quality to it that also affects someof the extras on disc 2 in the same way, an Enhanced Trivia Track that lists text information throughoutthe film where it counts, in place of subtitles and in addition to the 26chapter that split up the film, a separate list of Soundtrack Chaptersthat take you to the individual songs within. 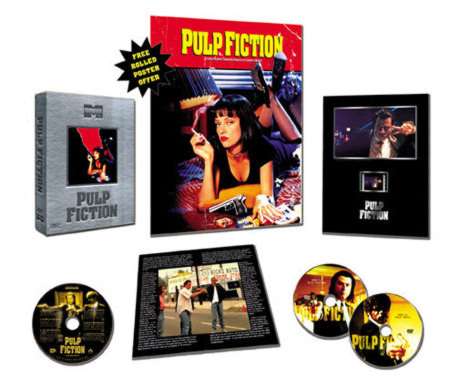 Disc two has a wealth of extras, and those parts which are affected the sameway as the Jackie Brown trailer are listed with a “*”, as it does give you aheadache if watching for an extended length of time :

This special boxset also contains a few extra non-DVD supplements which are asfollows: 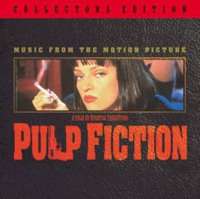 So, definitely one of the DVD boxsets of the year, but it is disappointingthat, firstly, the film is still censored for the moment where Vincent Vegashoots up. The image was reframed for pan-and-scan video to show the otherside of the screen where the needle pierces his skin, and the widescreen versioncropped that further. It’s the only phyiscal cut from the film, but you’d think thateight years on the BBFC would’ve let that go.

Also, I expected the full CD soundtrack – even if it was the 1994 release -and *didn’t* expect to have to send off for the poster.

There are English subtitles for the hard of hearing, and excellent menus,both animated and scored, with clips from the film appearing between the sub-menus.