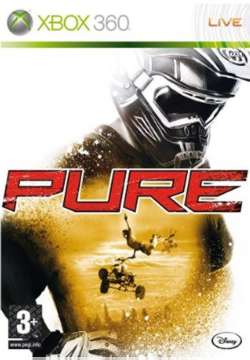 Pureis an all-action extreme sports dirtbike arcade racing game. That, plus the game footage captured here, will show you what it’sall about, but read on for more textual stimulation.

After choosing from a male or female player (and if you’re a straight guy, why wouldn’t you want to watch Suzi’s bum fly upand down over the jumps and sand dunes?), and customising your own ATV (all-terrain vehicle), you’re all set to get into thetutorial mode, which is fairly straight-forward and teaches you about “Pre-load”, a technique that allows you to pull downthe left stick just before a jump and then push it up as you’re about to leave the ground and then hold it for maximum air.

You can also perform tricks of three different complexities in order to get additional boost for your ride or to pulloff the more difficult tricks as those are only available to you as you gain the extra boost (that will make sense when youplay it).

Pure on Xbox 360: Race 1
The first main option in Pure is to go through world tours comprising of 10 stages. Complete the events and then you’llget clearance to the further stages, proceeding up the rankings as you go. This is the option I tend to go for this sort of gameas it gives you a little more substance to the challenge.

There’s also a single event option with three subsequent offerings: Race – which does what it says on the tin and has youcompeting with other riders to finish first; Sprint – the same again but with short technical circuits, and you’ll see acombination of the two types in the World Tour section anyway; and then Freestyle – again, using tracks you’ve seenbefore but with the nice addition of extra ramps etc. which point you towards score multipliers, special tricks and evenmore petrol, and the one with the most points at the end wins – but beware that all of the other riders can also snatchthose mid-air bonuses too. All of these also have a trial mode option, as well.

Pure has well-detailed graphics with attractive environments – that include the ability to come a cropper a number of times -and a hi-energy/rock mixture in the soundtrack, but the gameplay gets frustrating when you just can’t pull off a trick thatyou wanted and end up falling behind – even if it doesn’t seem particularly difficult to catch up with the pack.

Basically, if you want a fun arcade racing game that’s great for parties and are into titles like Mario Kart andMotorstorm then this will be right up your street, it’s just a little bit empty.The rest of it is a game of two halves – on the plus side, the game does have reasonably short load times between levels andwhile it’s fun for a few hours, I prefer something that feels like I’ve got more power – and any speed you lose during a raceoften tends to happen because you’ve gone over a ramp and hit the next one when you were meant to be going up it, so you’resuddenly on zero mph.

Fans of the genre will be pleased to learn that the advisor to the development team is Pro rider Wes Miller, founder ofH-Bomb Films, best known for showcasing his team’s amazing stunts to assure the game adheres to the sport’s culture andauthenticity but still allows creative liberties. Fans of the ‘garage’ section of this sort of game will also be at home hereas you can customise your ATV to your heart’s content, but as that was to happen before any racing could in the World Tour, Iwas left just flicking through the options – yes, yes, yes, come on, just get me to the race!

There is also Xbox Live gameplay available for up to 16 players but I only have a silver membership, hence why there’s isno comment on that side of it.

One other note: Normally, I put game footage in a review having linked my Xbox 360 to my TiVo and then selecting the best bitsto upload. However, as the game only runs in 60Hz (which the box doesn’t mention) when in standard definition, I couldn’t dothis so had to go with the next best option – which was the first time I tried this – of getting it onscreen in 1080ihigh-defintion and pointing a video camera at the screen. Hope it comes out okay.

Pure on Xbox 360: Race 4
In this review, I’ve uploaded a number of clips including the ones above, with more to come, which are as follows: