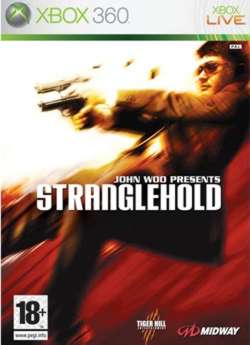 AJohn Woo’s Strangleholdis effectively a sequel to his 1992 action movie, Hard Boiled, starring Chow Yun Fat as Inspector”Tequila” Yuen, one which I haven’t actually seen (shame on me, I know), although from the clips I’ve seen Ican see where it’s coming from.

John Woo’s Stranglehold:
Blowing kneecaps in a busy marketplace
Being the first game from Midway to use the Unreal Engine 3, the basic plot of the game is that, in Hong Kong,a policeman has gone missing. The kidnappers call and say they want a single office to take a trip to Kowloonmarket, and that means you, thus leading to a series of levels involving battles with the Triads and the RussianMafia.

There’s more to discover as the game takes you to Chicago, and while I haven’t played it all yet, I’m ledto believe that the majority of the game style is the same, but that doesn’t mean it’s a problem. Quite theopposite in fact because as you play this one-man-on-a-mission type of cop, Strangehold is a fuckingbig load of CRASH!BANG!WALLOP! and I love it!

John Woo’s Stranglehold:
Precision-time shooting!
Taking some elements from films that have followed since Woo’s film came out,The Matrix‘s’Bullet time’ style to slow down the passing of important seconds is called ‘Tequila time’ here, and as youjump about at the same time it gives a very similar look to Max Payne, which made for a wonderful series of gameson the PC,Xboxand even the humble Gameboy Advance,and it’s a great shame that no of those were released. Still, harmony is now restored.

If I had any complaints, the I’d say that the movement of Tequila is a bit wooden as you run about and he walksround like he’s got cramp. Gliding over tables doesn’t make for a smooth transition, especially when you can doit back and forth at will and he just heads back in the same pose, shuffling his bum backwards for the returnjourney, as you can see in the first clip in the market.

John Woo’s Stranglehold:
Stand-off!
However, there are so many good things happening in this game that makes his mobility problems less of an issue.You can perform stylish kills to earn stars to fill the Tequila Bomb Gauge and give a Health Boost, althoughyou don’t have to wait to get a full complement of these to benefit. Emergency replinishment comes from pressingleft on the D-pad to convert even a minor amount of Tequila Bomb energy into some health.

I could also whinge that too many baddies standing next to explosive barrels, yet again. But I won’t, since this gamedoes have the get-out clause which comes when they’re in their drugs labs that are full of explosive chemicalsanyway that go boom when you fire at them, as shown in the fifth clip below. In fact, as you play you’ll seethat so much of the environment can be blown apart or shot at to amusing effect. The thing to look out for isto shoot at things with a shiny look to them to cause mayhem, something I only realised after recording someof these clips, such as the stand-off one.

John Woo’s Stranglehold:
Precision-time II & Tequila gets stuck!
Precision-time bullets are really clever in the subsequent graphics that are rendered to pull the shot off.Okay, so when you shoot lots of people in or around the eye, they all clutch their heads in pretty much the sameway but it’s how it all mixes in with their surroundings as the camera twists around that makes it realistic andmakes you feel like you’re playing one of John Woo’s movies!

And for those gamers worried that they’ll have to go a long way before being able to save, don’t fret, there arelots of checkpoints, ammo and health.

John Woo’s Stranglehold:
More cool precision-time
Now what we need is for the powers that be to make a Clive Barker-based horror game and apply the same gameengine!

I’m not one for online multiplayer, so look elsewhere to see what that’s like, but I’ll also give a mention to the Extras, which are trailers for Wheelman, featuring Vin Diesel, which looks great but I can’t see yet onAmazon, sadly, andBlacksite Area 51,which looks good too and is already out. Click on the name for more info on that one.

So that’s it – the review of Stranglehold. It’s short but sweet, and basically, stop reading this andgo out and buy the bloody thing. It’s wonderful!