TombstoneEvery town has a story. Tombstone has a legend.Distributed by 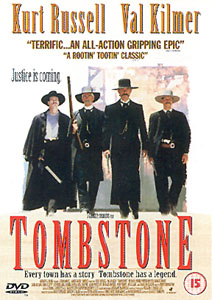 Tombstoneis the name of the boom town set in 1879 after the Civil War ends and not only is lifereturning to normal, but even luxuries such as Paris fashions are being sold there.Wyatt Earp (Kurt Russell) arrives in town looking to settle down with his family,but he finds himself returning to his lawman roots as a group of bandits roll into town,led by Curly Bill (Powers Boothe, who always manages to turn in a devilish performance,for example in U-Turn and Sudden Death) and his second-in-command, JohnnyRingo (Michael Biehn).

It’s not long before an old friend drifts back into Earp’s life, Doc Holliday (ValKilmer), who is slowly but surely dying of tuberculosis. The film goes about itsown way, following the lives and loves of everyone in the town, as it meanders towardsits conclusion with Earp setting out to clean up the town, stopping off part-way throughfor a gunfight at the OK Corral, not to mention his attraction to a 19th Century ‘It girl’equivalent, Josephine Marcus (Dana Delaney).

The picture quality is mostly clear of artifacts, but like a lot of Entertainment in Videotitles released, it may be in the correct widescreen ratio, this time being 2.35:1, butit isn’t anamorphically-enhanced for widescreen TVs. There is some grain present insome scenes, but less often than not and also a brief moment of ghosting it to be foundwithin the transfer at exactly 1:06:23 as Sam Elliot turns round. It affects both him andBill Paxton for one camera cut, making it look like there’s a piece of glass in front ofthem making a reflection. It looks very bizarre.

The average bitrate is a very good 7.53Mb/s, occasionally peaking at 9Mb/s.

The sound quality is fine and, like the American Region 1 release, it also containsa Dolby Digital 2.0 (Dolby Surround) soundtrack. It has its moments when there’s gunfire,but the rest of it won’t have the neighbours banging on your walls. There is a nice momentat the start though, as the opening monologue, starts off in mono, but a gunshot bringsthe opening theme into surround-land.

Extras : Chapters & Trailer :While some films have plenty of chapters, others have a meagre number. This one contains12, in comparison to the Region 1’s 25. There’s also a curious attempt to list the time atwhich each chapter kicks in, but this has only been listed for 9 of these and every singleone is anything between 60 and 63 minutes fast !?! The original theatricaltrailer is also included. Languages & Subtitles :Just one language for this disc – English in Dolby Surround – but no subtitles. ‘Making of’ featurette :A five-minute ‘making of’, which behaves more like an extended trailer. If itmakes your DVD-ROM player lock up, then it will also appear to stutter. Menu :

The menu is static and silent with a picture of the three Earp brothers and Doc standingside by side.

If you’re a die-hard fan of westerns, then Tombstone might be your bag, but Ifound it moves too slowly with not a lot of any consequence happening for too long.However, there’s not a lot to choose between this and the American release, apart fromtwice the number of chapters, but it’s a shame that an anamorphic print could not besourced.