The Definitive Edition Distributed by 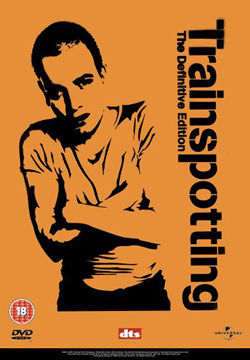 John Hodge (based on a novel by Irvine Welsh)

Trainspotting on DVD
Chooselife, choosea job, choose a career, choose a family, choose a fucking big television,choose washing machines, cars, compact disc players and electrical tinopeners, choose good health, low cholesterol and dental insurance, choosefixed interest mortgage repayments, choose a starter home, choose yourfriends, choose leisure wear and matching luggage, choose a three-piecesuite on hire purchase in a range of fucking fabrics, choose DIY and wonderingwho the fuck you are on a Sunday morning, choose sitting on that couchwatching mind-numbing spirit-crushing gameshows stuffing fucking junk foodinto your mouth, choose rotting away at the end of it all pissing yourlast in a miserable home nothing more than an embarassment to the selfishfucked-up brats that you’ve spawned to replace yourselves, choose yourfuture, choose life, but why would I want to do a thing like that?

I chose not to choose life, I chose something else, and the reasons?
There are no reasons. Who needs reasons when you’ve got heroin? 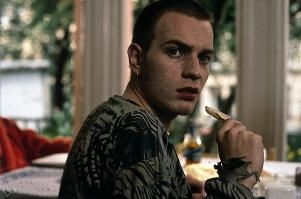 Trainspottingtells the tale of Renton, a man with a chronic heroin addiction,who is trying to kick the habit. Not easy as you might imagine, but inventivevisuals from the director make his journey almost as real for the vieweras it is for his character, played superbly by Ewan McGregor.

Also thrown into the mix is Diane (Kelly McDonald, most recentlyseen in BBC1’s State of Play), Renton’s new girlfriend, who hasone major surprise for him; Sick Boy (Jonny Lee Miller, who aims to kick the habit at thesame time as Renton – not for any particular reason, other than to completelypiss Renton off as to how easily it can be done; Spud (Ewen Bremner), Renton’s best friend,who isn’t very good in job interviews, and even worse at trying to keephis bedsheets clean; Tommy (Kevin McKidd), a sex-mad drug-hater, who makes XXX videoswith his girlfriend; and last, but not least, Begbie, played by the always-excellentRobert Carlyle, whose hit comedy, The Full Monty, wasscreened at my local cinema for seven months straight and was still pullingin the crowds when the video went on sale. Begbie is a complete madman, alwaysgetting drunk and looking for the next fight… oh, and swearing a great dealtoo…

A few cameos in this film include Keith Allen, who showed up asthe temporary flatmate in Shallow Grave, and appears here as a drugbuyer; My Name is Joe‘sPeter Mullan as drug dealer Swanney and Dale Winton playinghimself as a game-show host.

On all previous DVD and VHS releases, the film was cut for nine seconds ofdrug abuse, for viewing the actual needle piercing the skin whileinjecting, the same thing thatPulp Fictionsuffered when released on UK video, laserdisc and DVD. Trainspotting: TheDefinitive Edition is, thankfully, totally uncut. However, when it wasoriginally released on DVD,an uncut version accidentally escaped into the open fora while before being recalled and I got one of those 🙂

Of course, the extras were very thin on the ground by comparison to this 2-discrelease.

A word about the film first, though. If you never saw it on any previousrelease then you must see it now. If you enjoyed it before then you’ll stilldo so now. It really is a fantastic ride of entertainment and makes you wonderhow director Danny Boyle could come up with the steaming pile ofemptyness that was28 Days Later.

On a side note, the original American release of this film had the firsttwenty minutes dubbed into American accents (!), and some sex scenes removed.When the MPAA (the USA equivalent of the BBFC) asked director Danny Boylewhat Diane was doing to Renton while on top and reaching down with herhand between his legs… he said “Tickling his balls”. The MPAA were notamused, and instructed him to cut the scene. 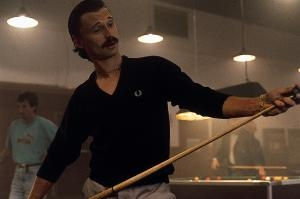 The picture is framed at the original intended ratio of 1.77:1, so will fitexactly into the frame of a widescreen television. The image is also anamorphicand looks fantastic throughout with nothing to complain about.

The sound quality is superb. While it has a number of relatively quiet scenesof plain dialogue, it really comes into its own whenblasting out classic tracks such as : Iggy Pop – Lust For Life; Heaven17 – Temptation; Underworld – Born Slippy and Sleeper – Atomic,a cover version I didn’t expect.After watching this film, every time I hear the latter on the radio, it bringsme back to the moment where Renton’s sexual appetite returns and he cops off(and more) with then-newcomer Kelly MacDonald.

Both Dolby Digital 5.1 and DTS 5.1 soundtracks are included here, but whileI always go for the later it won’t make a massive amount of difference in thisfilm if you don’t have DTS.

The main menus loop “Atomic” with brief bits of film footage hazed out in orangeto blend in with the look of the packaging. Subtitles are in English only, buteven if you don’t select those you’ll still see them during a nightclub scenebut that’s intentional. The film is separated by 20 chapters.