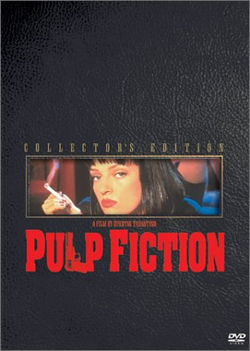 Pulp Fiction.Two immediately recognizable words that mean too much fortwo words. Edgy, violent, smart, hip, and most of all cool. Mention thismovie to anyone and they’ll either tell you two opinions: love it orhate it. I like to look at Quentin Tarantino films as the flicks madeby a movie buff for the movie buffs. His films are for the true purists,the people who live and breathe film, the people who get the in-jokesand appreciate good cinema when they see it. Show this orReservoir Dogsto the typicalAmerican Piegeneration junkie and they’ll turn it off inten minutes. Quentin Tarantino, Spike Lee, Kevin Smith and a few othersare the directors who understand this. For them it’s not about themoney, it’s about telling a story and doing it the best way they can.

Telling the plot of Pulp Fiction is like trying to tell a person thedifference between widescreen and full frame (I know I’m beating thishorse to death but just one more anecdote and I’m finished I promise).You either get it or you don’t. Split into three chapters. Each telldifferent arcs but they’re of the same characters in the same place,just told in different time frames.

The first starts off with somedifferent scenes then focuses on John Travolta‘s character Vincent Vega(related to Mr. Blonde himself, Vic Vega from Reservoir Dogs?) and UmaThurman‘s character Mia. After that we get the Gold Watch featuringBruce Willis‘ character Butch Coolidge and Ving Rhames‘ characterMarsellus Wallace. Then comes the last segment andquite possibly the best: It focuses on Vincent and Jules’ (Samuel L.Jackson) little assignment from the beginning. Vincent leans to the backseat and talks to a guy named Marvin. All of a sudden the gun goes offand the car is splattered with blood.

Vincent: “I shot Marvin in the face.”
Jules: “What do you mean you shot him in the face?”
Vincent: “I don’t know….it was an accident.”

Twists and turns like this are what make Pulp Fiction stand out (BruceWillis with a samurai sword in a pawn shop – how’s that for unexpected?).

Even though it’s a great film it has one problem that sticks out, to meat least. For instance, the Jack Rabbit Slim’s scene is a little toolong, I often skip right over the entire segment. I have nothing at allagainst Uma Thurman, she’s a very good actress, but I just think her andJohn Travolta’s segment is the weakest of the three. I’m probably theonly one who thinks this but it doesn’t ruin the film in any way.

Buena Vista has finally revisited one of their most lackluster discs.This new disc features an anamorphic 2.35:1 transfer. Colors are wellbalanced and fleshtones are significantly better. Blacks are very deep.There is some very minor grain noticed in some scenes but this wasunavoidable given the gritty nature of the film. Pixelization and edgeenhancement are thankfully gone. This is easily the best transfer I’veseen from the usually average quality titles from Buena Vista.

Buena Vista presents Pulp Fiction’s loud soundtrack perfectly in twooptions. A Dolby Digital 5.1 and DTS 5.1. Both tracks do a great job ofrendering every minute sound in this film. I never noticed any signs offading or dialouge interlacing. My only complaint with the sound, andthis isn’t for the film, is that the menus are way too loud. Eventurning the volume down you’re still messing with it when the moviecomes on. But that complaint is with the menus and not the movie.

Buena Vista tosses the bare bones platter from the previous release andgives us a full fledged special editon worthy of the banner. There werenumerous laserdisc releases here in the US alone so all the extras werefinally pulled together and put on the same format. Here’s how theplethora stacks up:

Pretty stuffed little package huh? Do you want to replace your old DVDnow?

Pulp Fiction is packaged in a cool cardboard case. Pull out the slipsleeve for the two discs. On the insert we get a collectible book andthe Jack Rabbit Slim’s menu. You also get some rebates including onethat gives you 5 dollars back if you previously owned the old DVD. Themenus are animated and, like I said above, very loud. The film offers 26chapters total.

Overall, Buena Vista has produced an excellent pakage here. Isn’t itfunny how the months of August and September have seen 4 QuentinTarantino films released in two disc special editions? Pick up all four:Pulp Fiction, Jackie Brown, the awesome Reservoir Dogs, and theTarantino penned True Romance (which I will pick up as well soon).That’s eight discs and some great films.