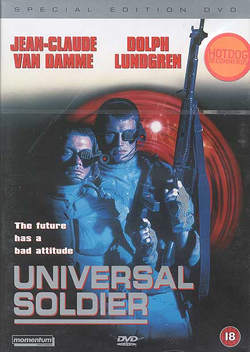 When I first saw Universal Soldierat the cinema, I thought it was unworthy junk. It didn’t make a lot of senseand nothing gelled together. When I saw it again a few months later at theKeele Film Society, it was still as cheesy, but everything clicked into placeand I hugely enjoyed it. I do so even more now.

The film starts in Vietnam, 1969, when Sgt. Andrew Scott (Dolph Lundgren)and his underling Luc Deveraux (Jean Claude Van Damme) are on tour andScott’s going a little loopy. Deveraux’s suspicions are confirmed when Scottcorners a Vietnamese couple, shoots the man in the head and blows the girlup with a grenade as she tries to run off. An exchange of gunfire later andthe two soldiers are dead.

Fast forward to the present day – well, 1992 to be exact – and the US army are,unbeknown to the government, resurrecting dead soldiers so as to retrain themas super-human cyborgs – or Universal Soldiers (UniSol) – and carry out deadlymissions so as not to endanger those still left as a regular human being.

Just one problem: on their third mission – and the one on which we join them -Luc’s starting to remember his past when he spots a familiar female faceamongst the hostages. At the same time, roving reporter Veronica Roberts(Ally Walker) sneaks into the UniSol compound with her cameraman, but when he is summarily executed by Scott in the same way as done in Vietnam,to cut a long story short she takes off with Luc and they go on the run – shetrying to save her life and him trying to understand his.

What follows is a first class action chase film, something Van Damme fails todo regularly. It’s packed full of witty one-liners, such as when Luc asksVeronica to remove a tracking device placed somewhere about his naked person,proclaiming “look for something hard”, as he moves her hand towards hisnether regions; and visual gags such as later in a restaurant fight scenewhen Luc knocks a guy out and throws him onto a pool table causing most of theballs to be pocketed (!)

Big, loud and very proud, director Roland Emmerich and co-screenwriterDean Devlin, not handling the producing reins this time, delivernearly 100-minutes of action-packed delight that raises two fingers and shouta big ‘fuck off’ to just about anything Van Damme or Dolph Lundgren havedone before or since.

Ooh, he looks pissed off.

This film didn’t have a happy life when first released as a widescreen video.Placed inside a box-set with a colour-change T-shirt that reacted to yourbody sweat – all the rage in the early 90s – the picture was cropped to apaltry 1.66:1 ratio. A few months later, a single-tape video was madeavailable in 2.35:1, but not as part of the same boxset.

Thankfully, everything has been put right here. 2.35:1 again, but anamorphicfor a marked increase in resolution, I spotted a couple of so-slightdefects throughout the film that you’d see on just about any print,plus some minor artifacts that you only notice with your face pressed againstthe screen, but on the whole it looks damn fine for a nine-year-old movie.The average bitrate is a fairly high but erratic 7.59Mb/s.

Momentum Pictures have delivered the good in giving us not only a Dolby Digital5.1 soundtrack, but a spanking fresh DTS 5.1 which kicks major ass in thefight and action scenes, is at its best when it comes to big explosionsand provides crystal clear atmospheric effects even in the quietest momentswith split-surround phonics that made me feel like my ears were blocked with acold (this is good, by the way, because it demonstrates the capability ofthe sound format).

Oh – and Germans are only treated to plain Dolby Surround.

# “Dolph’s got a brand new combine harvester,
Jean’ll give him the key.” #

The extras consist of 2 Trailers, one teaser (1 minute) and one theatrical(2½ minutes), both in non-anamorphic 16:9. The Making Of Universal Soldieris seven minutes of chat with the cast and crew interspersed by non-anamorphicfilm clips in 1.66:1 (15:9) and the Behind-the-scenes footage is 15½minutes of B-roll work in progress on-set material. Finally, comes a feature-lengthAudio Commentary track from director Roland Emmerich andco-screenwriter Dean Devlin.

The disc contains a decent 20 chapters, subtitles in English, German, Dutchand Turkish and the menus contain some action noises and clips from the film.