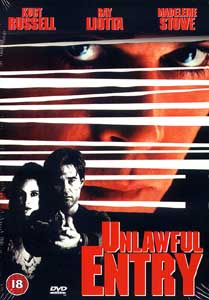 Unlawful Entryis what the police term a break-in and that’s what happens to lovey-doveycouple Michael Carr (Kurt Russell) and his wife Karen (Madeleine Stowe).The burglar makes a nuisance of himself when disturbed by holding a knife toKaren’s throat in a bid to escape with hostage. He gets away and leaves herunharmed, but surely everything is okay the minute the police arrive?

Well it might be if one of them wasn’t Officer Pete Davis (Ray Liotta),a nutball of the highest order who starts off nice but soon shows his unhingedside not only to the Carrs but to us viewers as we see what he gets up to whenhe’s out on a job.

The plot isn’t particularly original and the film could’ve fallen completelyflat on its face, but is surprisingly gripping even though it’s not hard towork out who’ll come off worst but the time the closing credits roll.

The image is framed at the original cinema ratio of 1.85:1 and is anamorphicbut is rather grainy and disappointing. The average bitrate is a good 7Mb/s,often hovering around that mark.

Extras : Chapters and Trailer :There are 22 chapters during the 107-minute film which is fine and the discis coupled with the original theatrical trailer. Languages and Subtitles :There’s just one language on this disc – English – in Dolby Surround.Subtitles come in 11 flavours: Swedish, Norwegian, Danish, Finnish,Portuguese, Hebrew, Polish, Czech, Hungarian, Icelandicand English for the hearing impaired. Menu :The menus are all static and silent, with the basic options you’d expect.

Overall, I really enjoyed this film the first time I saw it in the cinemaand still do now. However, with a substandard picture quality and scant extras,can a back-catalogue title really justify the price of £19.99?

Review copyright © Dominic Robinson, 2000.
[Up to the top of this page]

Doctor Who: The Collection Season 8 on Blu-ray – OUT NOW!