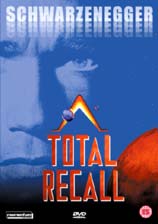 After the success of 1987’s Robocop,director Paul Verhoeven went on to make this Sci-Fi action classic.Douglas Quaid (Arnold Schwarzenegger) is a construction worker who keeps having nightmares about Mars.He decides to visit a company called Rekall who specialise in virtualholidays. Quaid pays for a 2 week trip to Mars.

Unfortunately, something goes wrong in the programming and Quaid nowbelieves that he is a secret agent who has been to Mars. He then finds thatmen are trying to kill him and that his wife, Lori (Sharon Stone), is not his wife and isatctually there to monitor his movements.

After discovering a message from himself,Quaid goes to the red planet and is reunited with his former lover, Melina (Rachel Ticotin).Quaid discovers that there is ancient alien machinery which was installed byaliens millions of years ago but was never used. Using the advice of rebelleader Kuato, Quaid and Melina attempt to activate the dormant mechanism.

But before they can do this, Cohaagen’s (Ronny Cox) men capture themand reveal to Quaid the real truth.After escaping being re-programmed, the duo set off to put an end toCohaagen’s reign and activate the alien machinery.

Total Recall is an excellent example of the sci-fi action genre alongside,Robocop,Aliensand both Terminator films. It may be 11 years old but it hashardly dated at all.The cast give good performances and the effects are very good too.

The film is presented in its original 1.85:1 ratio and looks superb. Thefilm is very red and fortunately this disc handles the reds extremely well.There are no signs of digital artefacts and hardly any sparkle or grain. Theflesh tones do look a little dull but this is probably more to do with theage of the film.

The sound is in Dolby Digital 5.1 and it is very good. It is mostly frontorientated but there are occasional surround effects. The beginning ofchapter 10 sounds great as does most of the film’s climatic ending.Explosions, gunfires and rumbles all come across well.

Chapters:There are 24 chapters for the film which is good but it could haveused more. The R1 had 39 chapters although not all these were highlighted.

Languages and Subtitles:There are 3 languages on this disc and they are English Dolby Digital 5.1,German Dolby Surround and Spanish.Dolby Surround. There are subtitles in 6 languages including English, Dutch,Spanish, German, Turkish and Portuguese.

Making Of Total Recall featurette:This is a 7 minute making of whichcontains some very nice interviews, behind-the-scenes material and conceptartwork. It could have been longer though.

Easter Egg:In the special features menu, highlight Trailer and press left.You will then find a TV screen. Click on it and you get the full Rekall TVad from the film. It lasts 49 seconds.

Menu:Excellent! These menus have been made to match the atmosphere of thefilm and this works splendidly. The sub-menus featuring video clips are goodtoo.

Overall, this is a fantastic film which everyone should see but I do have aslight problem with the extras. There could have been more here including alonger featurette ( a 23 minute version was released on video ), acommentary from Paul Verhoeven and a photo gallery.Having said that, what we get is good value for money and this is the bestversion you can buy. Also the featurette on the disc includes material notseen in the VHS version.

Review copyright © Adam Duncan, 2001.E-mail Adam Duncan
[Up to the top of this page]